In and Around the Fractal Design Node 605

Where the Fractal Design Node 605 excels is in the same place Fractal Design typically excels: external design. The aesthetic of the Node 605 is beautiful, symmetrical, and can be had in any color you want so long as that color is black. The brushed aluminum finish of the fascia will only look out of place in your entertainment center if the other electronics you have are substantially cheaper looking (and often can be). Plastic is kept at an absolute bare minimum in this chassis.

Lighting is equally minimal, and that's appreciated. There's a soft blue LED behind the power button, and the red IDE activity LED is hidden behind the small drop-down door in the front of the case. That door also hides all of the I/O. Two USB 3.0 ports are on tap, and again I'm happy to see the built-in card reader. What may throw some people for a loop is the 6-pin FireWire port. FireWire is a dying standard, but many older video cameras use it, so I can see why Fractal Design would opt to include it on a modern case. I don't know that it will see much use, but it's there.

The sides of the Node 605 both feature 120mm vents; two of these vents conceal 120mm intake fans, while one conceals a mount and the fourth is for cooling the power supply. When you move to the back of the case, you can see how Fractal Design arranged everything, and it's pretty simple: ATX motherboard support on the right side of the case, power supply standing on its side on the left.

Opening the Node 605 is as easy as removing two screws from the back of the case. The top panel slides off easily, and features a large acoustic pad on its underside. Note that there are no thumbscrews used anywhere in this design: nothing in the Node 605 is toolless. 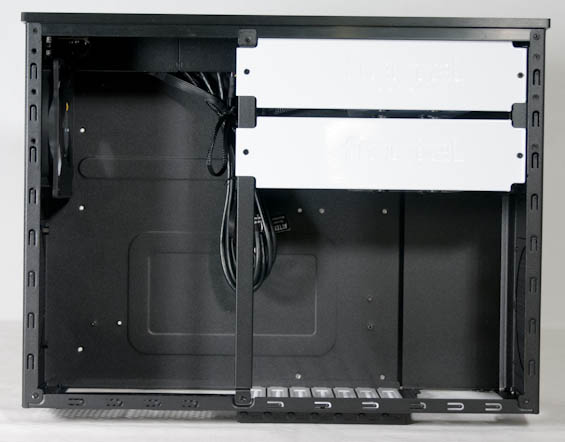 Opening the Node 605, I was frankly surprised at just how simple the interior layout really was. I'm coming from the SilverStone Grandia GD04, which was incredibly involved to work inside. The Node 605 is remarkably straightforward, though: motherboard mounting points are obvious, as is the power supply bay. The pair of drive cages hang off of a single rail in the middle of the case, and all of this is easy to remove with a Phillips head screwdriver.

Superficially, the Node 605 just looks like an almost strictly better GD04. It's unfortunate I can't directly compare the two in performance; the GD04 was my second case review here and I've actually refreshed the testbed twice since then. There's the same positive-pressure internal design, but the Node 605 ditches the large 5.25" optical drive bay in favor of a slimline one at the bottom of the case. It also, and this is important, is missing the third intake fan. The GD04 features an intake fan that blows almost directly on the CPU, but the Node 605 doesn't include it, instead offering an empty fan mount.