Ultimately I don't know that this data really changes what we already knew about Clover Trail: it is a more power efficient platform than NVIDIA's Tegra 3. I summed up the power consumption advantage in the table below (I left out the GPU numbers since I'm not totally clear with what NVIDIA attaches to the GPU power rail on Tegra 3):

Across the board Intel manages a huge advantage over NVIDIA's Tegra 3. Again, this shouldn't be a surprise. Intel's 32nm SoC process offers a big advantage over TSMC's 40nm G used for NVIDIA's Cortex A9 cores (the rest of the SoC is built on LP, the whole chip uses TSMC's 40nm LPG), and there are also the architectural advantages that Atom offers over ARM's Cortex A9. As we've mentioned in both our Medfield and Clover Trail reviews: the x86 power myth has been busted. I think it's very telling that Intel didn't show up with an iPad for this comparison, although I will be trying to replicate this setup on my own with an iPad 4 to see if I can't make it happen without breaking too many devices. We've also just now received the first Qualcomm Krait based Windows RT tablets, which will make another interesting comparison point going forward. 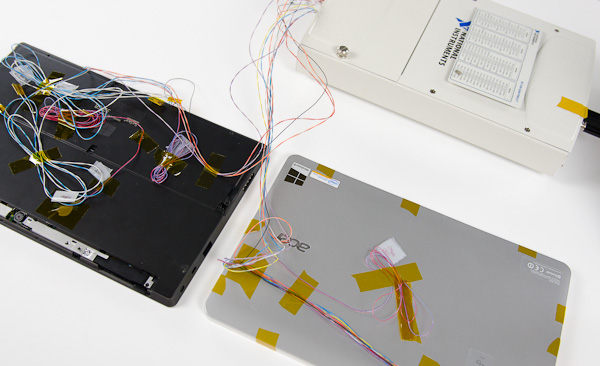 Keeping in mind that this isn't Intel's best foot forward either, the coming years ahead should provide for some entertaining competition. In less than a year Intel will be shipping its first 22nm Atom in tablets, while NVIDIA will quickly toss Tegra 3 aside in favor of the Cortex A15 based 28nm Wayne (Tegra 4?) SoC in the first half of next year. Beating up on Surface RT today may be fun for Intel, but next year won't be quite as easy. The big unknown in all of this is of course what happens when Core gets below 10W. Intel already demonstrated Haswell at 8W - it wouldn't be too far fetched to assume that Intel is gunning for Swift/Cortex A15 with a Core based SoC next year.

Here's where it really gets tricky: Intel built the better SoC, but Microsoft built the better device - and that device happens to use Tegra 3. The days of Intel simply building a chip and putting it out in the world are long gone. As it first discovered with Apple, only through a close relationship with the OEM can Intel really deliver a compelling product. When left to their own devices, the OEMs don't always seem to build competitive devices. Even despite Intel's significant involvement in Acer's W510, the tablet showed up with an unusable trackpad, underperforming WiFi and stability issues. Clover Trail has the CPU performance I want from a tablet today, but I want Apple, Google or Microsoft to use it. I do have hope that the other players will wake up and get better, but for next year I feel like the tune won't be any different. Intel needs design wins among the big three to really make an impact in the tablet space.

The good news is Microsoft is already engaged with Surface Pro. It's safe to bet that there will be a Haswell version coming as well. Now Intel just needs an iPad and a Nexus win.