This section is particularly exciting because it's our first look at ARM's new Mali-T604 GPU in our standard mobile 3D performance suite. We've already seen the Nexus 4's Adreno 320 in action, but the Nexus 10's behavior here should be interesting to see. 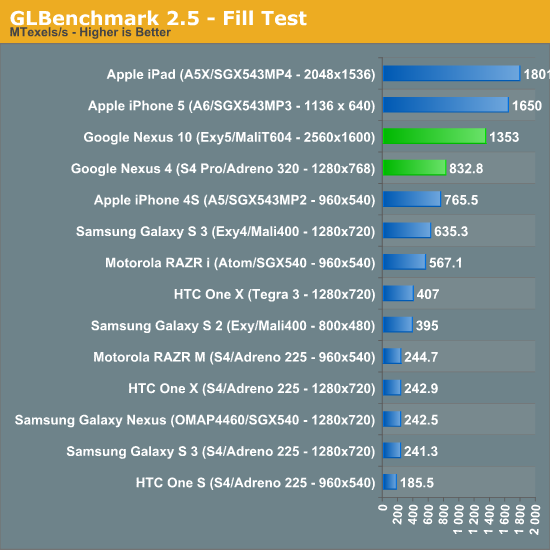 As far as raw fillrates are concerned, both Nexus devices do quite well here at their native resolutions. The iPad and iPhone 5 are both quicker, but we're still good gains over the previous generation of hardware - particularly for the Mali-T604. Compared to the Mali-400MP4 in the Galaxy S 3, we're seeing more than 2x the performance out of ARM's latest GPU. 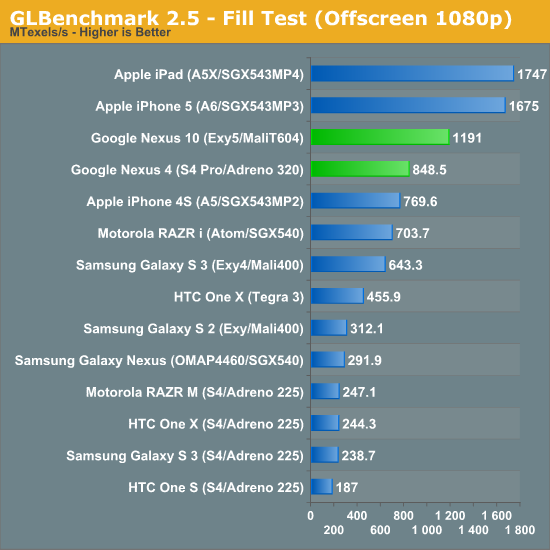 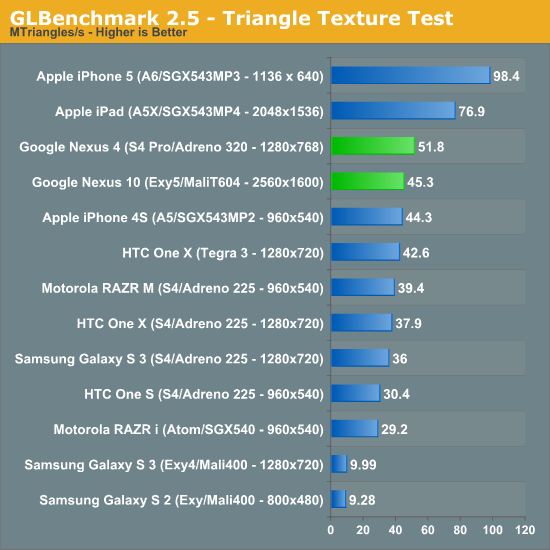 The T604 is ARM's first unified shader architecture, which gives it far more balanced pixel/vertex shader performance. The result is a more than 4x increase in triangle throughput compared to the Mali 400MP4. It's not enough to give the Nexus 10 the edge over the latest Apple devices, but it's a huge improvement over where ARM was in the previous generation. The Adreno 320 continues to be quite strong here as well. 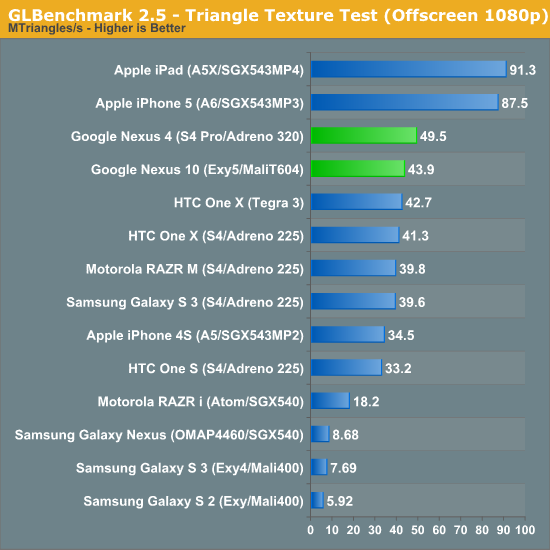 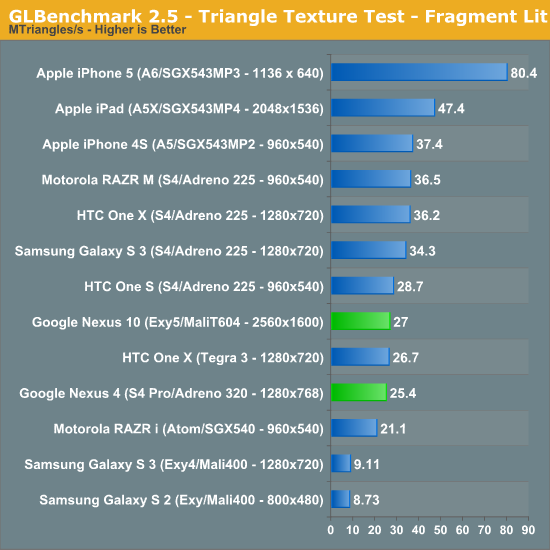 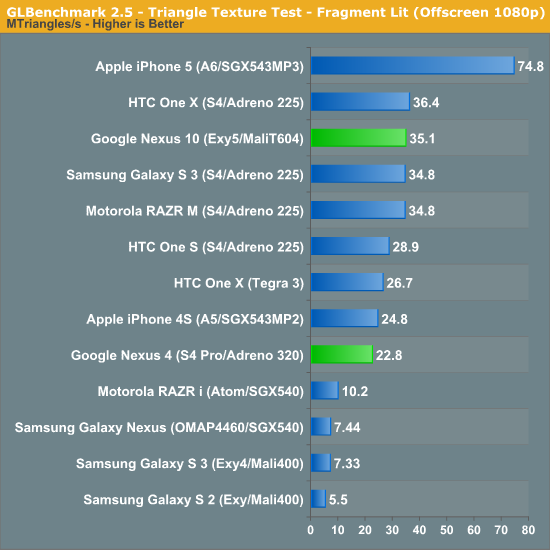 Once again we're seeing huge gains for the Mali-T604 compared to the Mali-400MP4. The Adreno 320 in the Nexus 4 actually performs worse than the Adreno 225 in older devices, possibly due to thermal throttling we saw on the Nexus 4 sample during periods of heavy load. 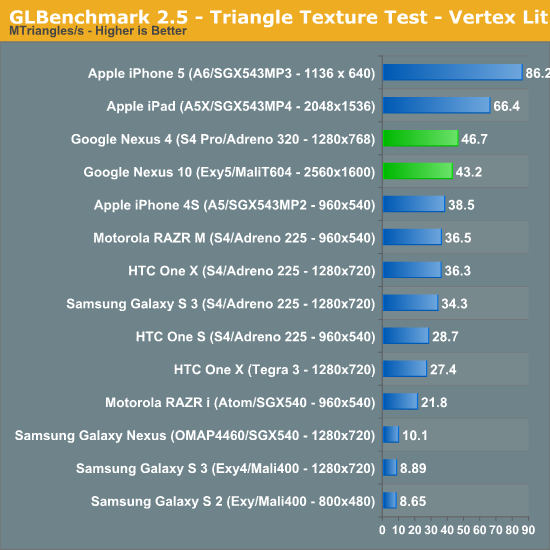 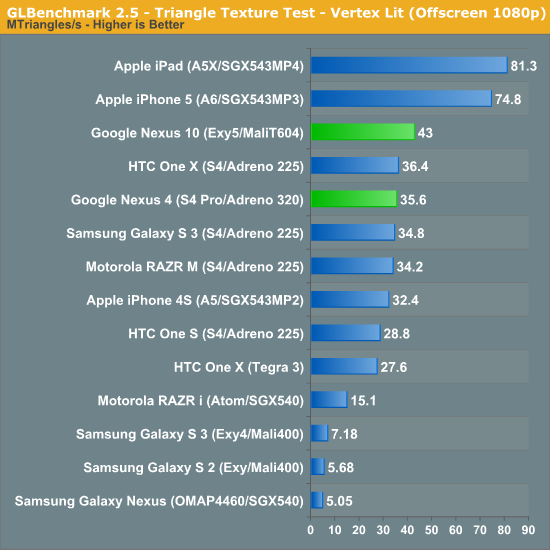 ARM shows the biggest gains here once again thanks to its move to a unified shader architecture. The Adreno 320 does ok here but it's really no better than the 225, I suspect there is some thermal throttling happening on the device. 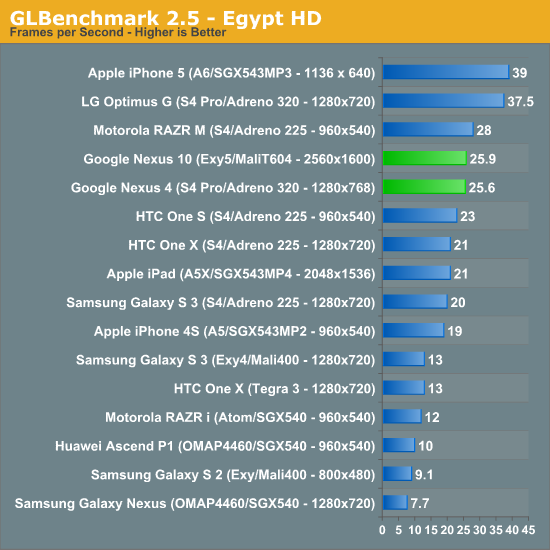 At native resolutions, the Nexus 10 and NExus 4 are both capable of putting out decent frame rates in Egypt HD. What this data tells us is they'll likely be able to run current and even some future titles, at native res, at 30 fps without much of an issue. 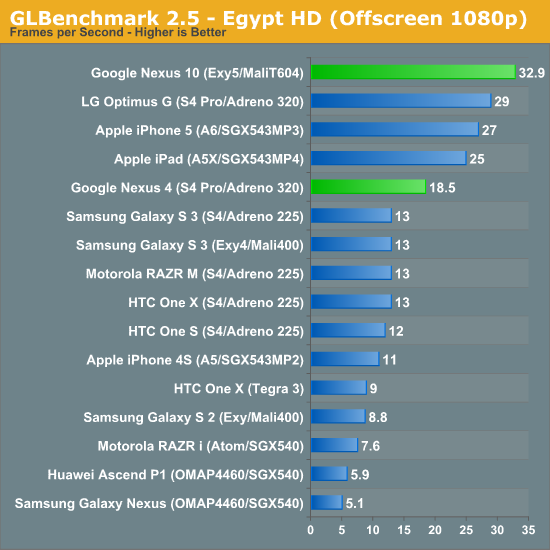 Normalize resolution and the Mali-T604 actually does very well here, setting a new performance record. Despite being based on the same hardware, the Optimus G is able to post a much higher score here than the Nexus 4. The explanation is simple: the Optimus G can't complete a single, continuous run of GLBenchmark 2.5 - the app will run out of texture memory and crash if you try to run through the entire suite in a single setting. The outcome is that the Optimus G avoids some otherwise nasty throttling. The Nexus 4 on the other hand manages to complete everything, but likely quickly throttles its clocks down due to thermal constraints. The Nexus 4 was really hot by the end of our GLBenchmark run, which does point to some thermal throttling going on here. I do wonder if the Snapdragon S4 Pro is a bit too much for a smartphone, and is better suited for a tablet at 28nm. 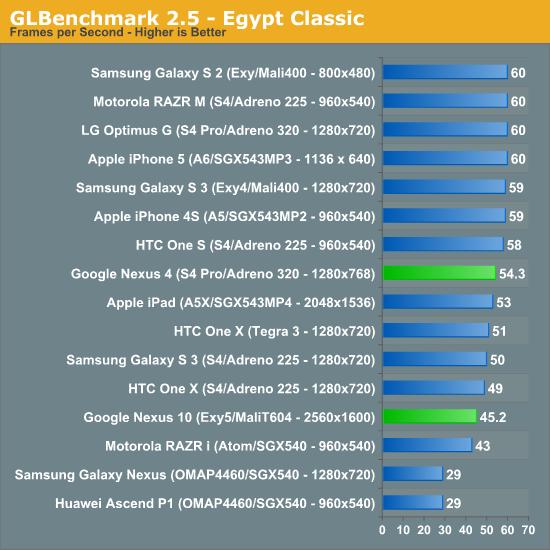 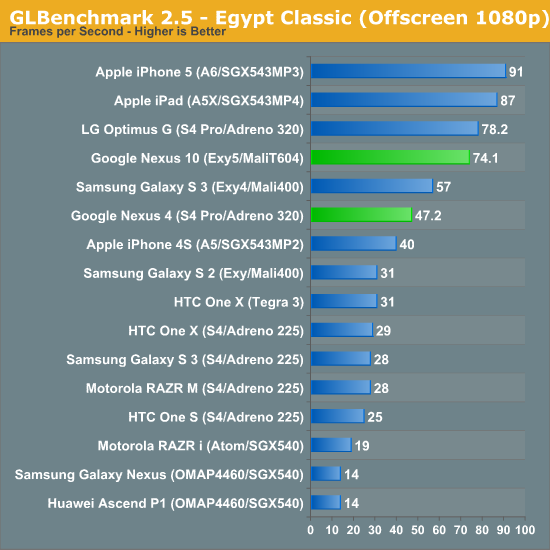 The Egypt Classic numbers are less interesting, but both platforms do well here.

We didn't have time to run through our entire battery life suite, but we do have some relevant results for the two devices. For smartphones, these are our latest web browsing battery life tests:

All Android tests use Chrome and 5GHz WiFi unless otherwise listed. 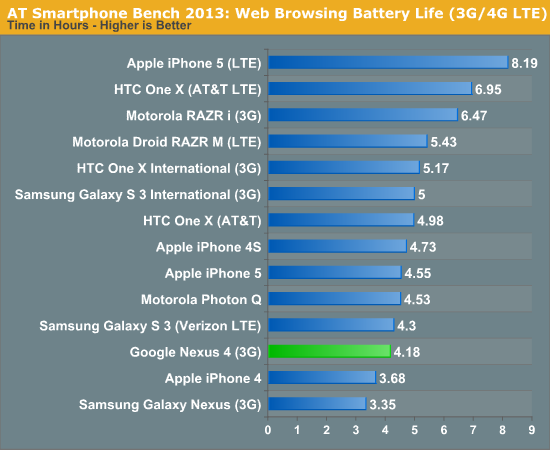 The Nexus 4 doesn't break any records for 3G battery life, it ends up relatively low on our list - even the Galaxy S 3 manages to do better here on 3G. 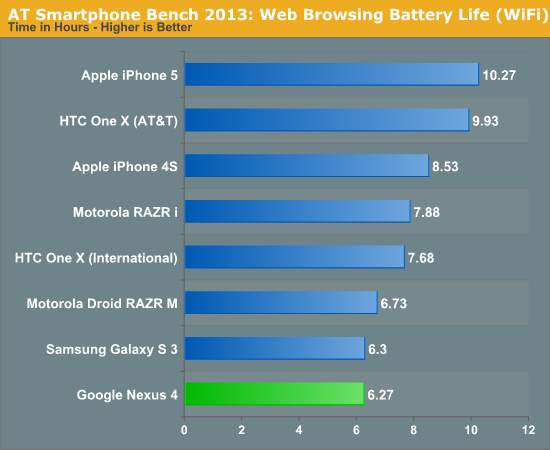 WiFi battery life is similar to the Galaxy S 3, but again it's not all that impressive compared to some of the other devices in this list.

Our tablet web browsing battery life test isn't directly comparable to the new smartphone tests, so we've got a separate chart for the Nexus 10: 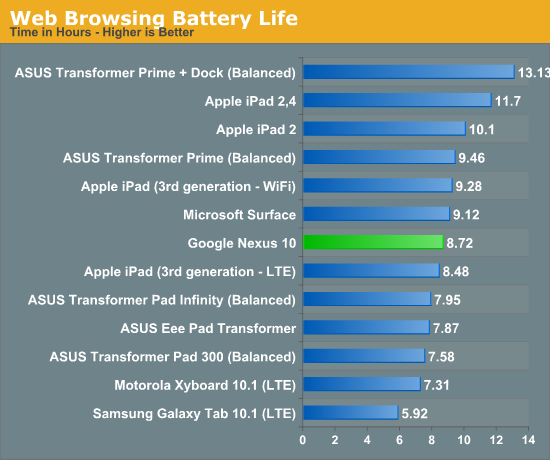 Despite driving a very high res panel, Google is able to deliver relatively competitive battery life with the Nexus 10. Battery capacity is around 80% the size of the 3rd gen iPad and battery life is around 93% of what Apple delivers here. Over 10 hours would be nice to have, but 8 hours of use in this test isn't bad at all. We'll have to do more testing to understand Exynos 5's power behavior a bit better, but so far it doesn't seem that the platform is all that bad from a power consumption standpoint. It remains to be seen how gracefully the Nexus 10 will handle being taxed heavier.

We're still running our big display analysis routines on the new Nexus devices, but the brightness/contrast data below is a little teaser: 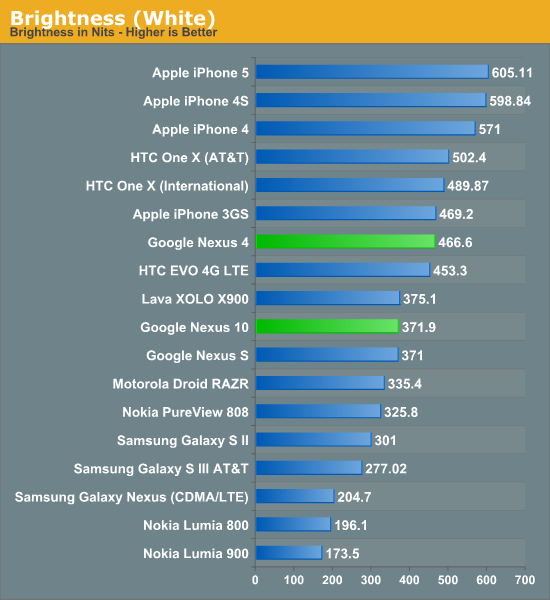 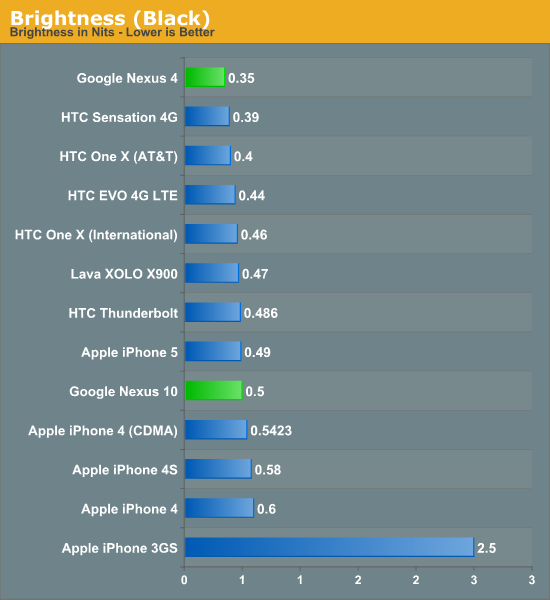 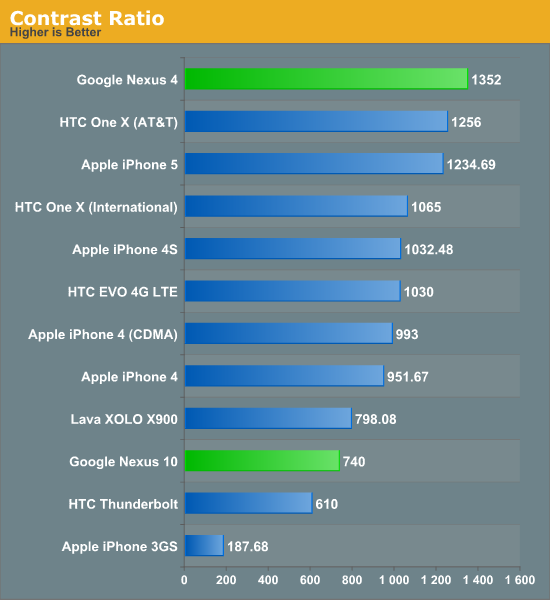 We still have a lot of additional writing and testing ahead of us. Stay tuned for our full review of both devices!