With the iPhone 5 and the corresponding iPod lineup refresh, Apple has moved away from the venerable 30-pin dock connector and onto a new 9-pin Lightning connector. The Lightning connector announcement caused a considerable amount of chatter in the Apple ecosystem primarily because of just how ubiquitous 30-pin accessories became in the years that Apple used that as the primary interface for everything iPod, iPad, and iPhone. 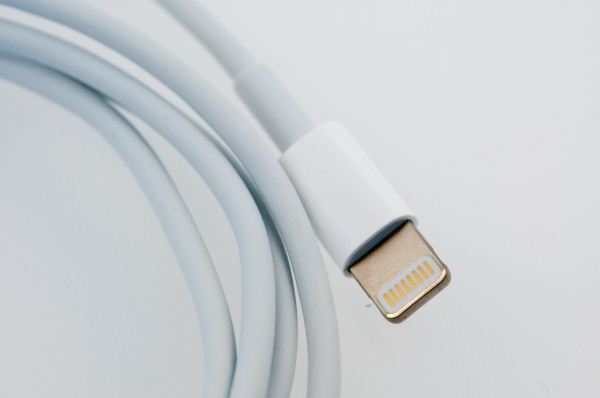 Over years of iDevice upgrades I wager most people have built up a considerable inventory of both 30-pin dock cables, chargers, and Made For i (MFi) accessories. Moving to a completely new interface warrants at the very least the purchase of new cables. Even in my own case this is a friction point, as I managed to snag an extra long 30-pin dock cable Apple uses in their displays for use on my nightstand, and there’s no equivalent at the moment for Lightning. At bare minimum I require three cables — one for the nightstand charger, one for in the car, and one for connecting to a computer. I’m willing to bet most other users are the same. In the days right after the iPhone 5 launch Lightning to USB cables were hard to come by both at carrier stores and Apple stores (one Verizon store told me their entire Lightning cable stock had been recalled), but by now stock of more Lightning to USB cables is getting better but still rather limited. 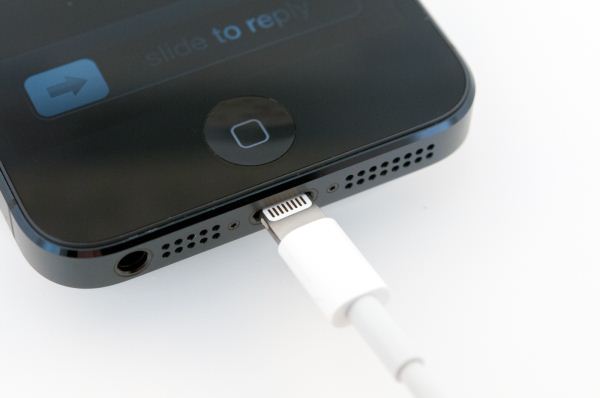 The new connector is both considerably smaller in overall volume than the old 30-pin, and fully reversible as well. On the Lightning male connector there are 8 exposed gold pads, with the metal support serving as the 9th pin and ground. As best I can tell, these are mapped in a rotational fashion not through the connector but rather so that the bottom left pin maps to the top right pin if looking top down. As an aside, I’ve seen people refer to the 9-pin as 8-pin because of this ground, which is puzzling, in spite of Apple even calling it a 9-pin internally (eg. “IOAccessoryDock9Pin”=1). The old 30-pin pinout had 7 pins dedicated to ground, yet everyone resisted calling it a 23-pin, but I digress.

Lightning of course does away with lots of the signaling that went unused on the older 30-pin adapter that previously accommodated the older iPod touch lineup. Things like 12 volt FireWire charging and data that went away a long time ago, and older analog video out compliance.

Apple calls Lightning an “adaptive” interface, and what this really means are different connectors with different chips inside for negotiating appropriate I/O from the host device. The way this works is that Apple sells MFi members Lightning connectors which they build into their device, and at present those come in 4 different signaling configurations with 2 physical models. There’s USB Host, USB Device, Serial, and charging only modes, and both a cable and dock variant with a metal support bracket, for a grand total of 8 different Lightning connector SKUs to choose from. At present by USB over Lightning I mean USB 2.0.

With Lightning, Apple officially has no provision for analog audio output, analog video output, or DisplayPort. That said special 3rd party MFi members will no doubt eventually get (or may already have) access to a Lightning connector for DisplayPort since obviously video out over a wired interface must continue. For audio output, Lightning implements USB audio output which looks like the standard USB audio class. This has been supported for a considerable time on the old 30-pin adapter, though most accessory makers simply chose to use analog out for cost reasons. I originally suspected that analog line-out would come over the 3.5mm headphone jack at the bottom of the iPhone (thus all the dockable interfaces at the bottom), but the iPod Nano 7G effectively threw that prediction out the window with its headphone jack placement. 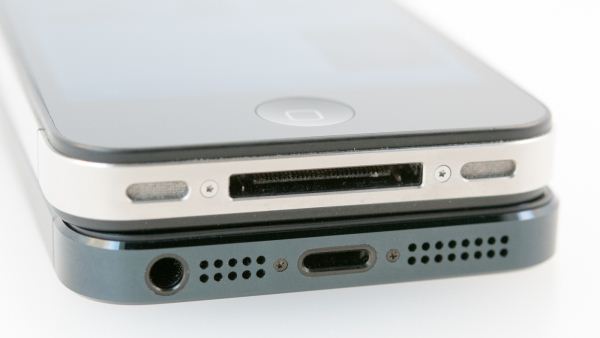 Thus, the connector chip inside isn’t so much an “authenticator” but rather a negotiation aide to signal what is required from the host device. Lightning implicitly requires use of one of these negotiation components, and in addition Apple still requires authentication hardware using certificates for every accessory that uses iAP (iPod Accessory Protocol). With Lightning Apple introduced iAP2 which is a complete redesign of iAP, the protocol which allows for playback control, communication with iOS applications, launching corresponding iOS apps, GPS location, iPod out, and so forth.

When it comes to the physical layer of Lightning there’s very little information out there regarding whether the Lightning chip is doing conversion from some other protocol or simply negotiating USB, Serial, or so forth, and then waiting for the host device to route those I/Os over the cable. You can imagine that with DisplayPort there will need to be some active component that multiplexes USB, DisplayPort, and supplies power over the 9 pins, so I suspect some other protocol on top of all this.

The new connector of course necessitates a new cable and new line of accessories. Probably the biggest inconvenience is that with the iPhone 5 there’s now even less of a chance you can snag a quick charge at a friend’s house or in a friend’s car unless they too have an iPhone 5. While that’s not an entirely fair criticism, the reality of smartphone battery life at the moment means that charging whenever or wherever you can is an important factor, and in ecosystems other than iOS land I’m spoiled by the ubiquity of microUSB. Another consideration is what happens in the case where a household has both devices with Lightning and the 30-pin connector — at present it looks like the solution is either multiple cables for the car charger or an adapter.

That brings me to the microUSB to Lightning adapter, which, like the microUSB to 30-pin dock adapter that came before it isn’t available in the USA but is available in Europe and elsewhere. At present the only way to get one of these in the states is to pay considerable markup and buy on eBay or have a friend ship one from abroad (I opted for the latter option, thanks to our own Ian Cutress). It’s unfortunate that Apple won’t sell you one of these stateside but rather forces you into buying cables. The Lightning to microUSB adapter supports both charging and sync/data functionality. I can’t understate that the Lightning to microUSB adapter is tiny, absolutely tiny. I thought the microUSB to 30-pin adapter was small and always at risk of becoming lost in the aether, well the Lightning equivalent is even smaller. 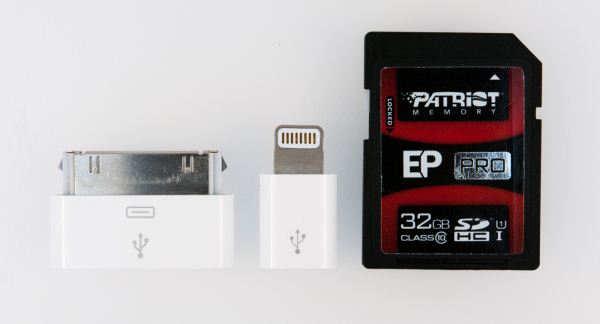 The reason for this disparity is that the EU mandated a common external power supply standard which implements the USB charging specification and uses microUSB as the connector. To skirt this requirement Apple made the original 30-pin dock connector available, and this time around has made a Lightning adapter available as well. The somewhat important and oft-overlooked context here is that Apple had standardized the 30-pin dock connector and its own 5 volt charging signaling before the GSM Association, International Telecommunication Union, or EU decided to implement the USB charging spec, and before even the USB-IF finished the charging spec. There’s a tangent here that’s worth discussing, and it’s how these two differ in signaling that a USB port has more than the standard 500 mA at 5V available from a USB 1.x or 2.0 port. 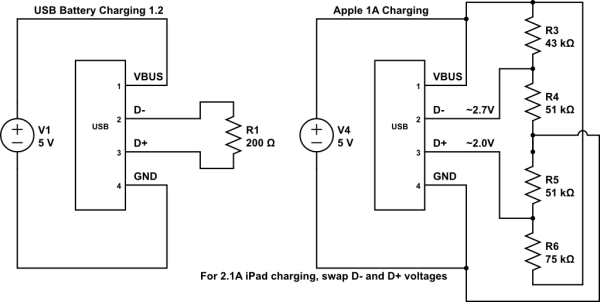 In the case of the USB Battery Charging 1.2 specification, signaling is actually superficially pretty simple, and boils down to sticking a 200 Ohm resistor across the D- and D+ pins. You can do this yourself and test with an external power supply, it works with almost every new device intended to be used with USB chargers. Apple however needed a 5V charging specification before the industry implemented it, and went with what boils down to two simple voltage dividers that drive 2.8 and 2.0 volts across D- and D+ respectively. If you go shopping around for USB charging controllers, you’ll see this referred to in the open as the Apple voltage divider. Anyways, my long winded point is that the microUSB to 30-pin and Lightning adapters contain a circuit of some kind to accommodate the difference in charging specification and deliver more than the 500 mA at 5V you’d get otherwise. What’s curious to me is that this time around using the Lightning to USB adapter plugged into a simple circuit simulating a USB BC 1.2 charger, I get the same current draw (around 0.8 A at 5V at maximum) as I do with Lightning to microUSB to the circuit.

Of course for accessories with dock connectors that aren’t on a fast replacement cycle (for example cars and AV receivers) users can opt to buy the 30-pin adapter for legacy dock accessories. This adapter of course includes a number of active components to talk with Lightning. While I haven’t tested this myself due to availability reasons, I’ve heard that it works fine with devices from the iPod 4th Generation days with serial iAP, no authentication chip, and analog audio. While video out isn’t supported on the 30-pin to lightning adapter, it sounds like the adapter does handle analog and USB audio out alongside charge and USB data.

Finally the last important angle is what happens for accessories that need to accommodate both older 30-pin devices and those with the new Lightning port. Apple’s guidance is pretty simple, it plainly disallows accessories from including both connectors, and instead wants manufacturers to adopt a modular plug assembly that presents one or the other at a time. The other solution is to simply use USB and the corresponding cable, but for docks that isn’t really a practical solution.

The reality of the 30-pin dock connector from 2003 is that it has been destined for a more modern, compact replacement for some time now. If you look at the actual pinout, a shocking number are devoted to I/O that simply wasn’t used anymore, and inspecting your average dock to USB connector and counting how many pins were actually there really drove home the reality that Apple was wasting a lot of space at the bottom of its devices. Volume gains from Lightning are really what enabled Apple to both redesign the speakerphone acoustic chamber, bottom microphone, and relocate the headphone jack on the iPhone 5.