Despite the fact that Gigabyte were late to the graphical BIOS party back in the P67 era, today we have a fully functioning BIOS on our hands to play with.  Over time, it has increased in speed, usability and presentation. The overriding message, as with any graphical BIOS, is to expose the nature of the configurable settings in an aesthetically pleasing way.  If you can get around the fact that Gigabyte calls a 2D image the '3D BIOS' technology, then usually the Gigabyte BIOS is an easy one to navigate and use.

Since the inception, Gigabyte seems to have gone through three phases of BIOS.  The first was slow and clunky, with transitions taking time.  The second saw the system speeded up, but in order to type numbers in NumLock had to be pressed which caused a 10-second delay.  Later BIOSes removed this time penalty, and this is what we see on the Z77 platform.  However there still seems to be an issue with the C606 chipset and that NumLock feature, as it is still a problem on the F3a BIOS for the X79S-UP5 WiFi.  Also of note is our Deferred Procedure Call latency testing, which determines how well requests for CPU time are dealt (critical for audio processing) - sometimes the software in the OS can have a negative impact, such as EasyTune 6, due to their system monitoring feature.  Gigabyte have solved the issue on Z77 with a BIOS update, however it still lingers here in C606.

Regarding MultiCore Enhancement, the X79S-UP5 does include MCE as part of the setup when XMP is enabled.  I can confirm this for regular socket 2011 Core processors, however I can also confirm that it does not affect Xeons.  As a result, we do get better multithreaded performance at stock settings for Sandy Bridge-E Core processors. It should also be noted that as of the F3a BIOS, two of the CPU settings seem not to work - Load Line Calibration settings for the CPU, no matter what option is selected, does not kick in properly.  We see this when we overclock - when 1.425 volts is selected in the BIOS and LLC set to Extreme, we would expect in the OS to see near 1.425 volts in our monitoring software.  However, on the X79S-UP5 WiFi, we get 1.380 volts, suggesting that default LLC is still applied.  The same goes with PLL Overvoltage, a feature used to get above 4.6 GHz on a Sandy Bridge processor - despite enabling this in the BIOS, it does not have an affect and we are limited in overclocking.

Chances are all these issues will be fixed in due course with a BIOS update.  Stay tuned to the Gigabyte webpage for the latest version.

The main screen as a user enters the BIOS is the '3D BIOS', showing a motherboard image similar to that used in the product. 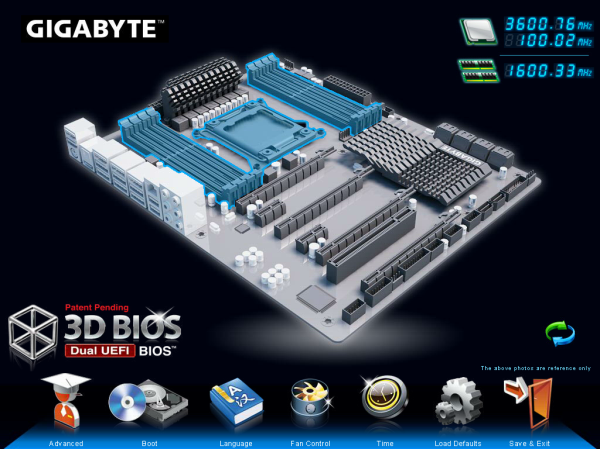 As an initial screen, I am a little disappointed, as it contains almost zero information.  The image of the motherboard may or may not be the motherboard that is actually being used (we saw similar scenarios on other Gigabyte motherboards), and we get no details about what is actually installed - motherboard name/model, CPU used, memory amount, temperatures, voltages, fan speeds et al.  As a system builder or debugger, this information is vital so I do not have to go rummaging inside a possibly dusty case.

This main screen separates the BIOS up into different areas that the user can click or highlight, and as I have specified in previous reviews, it would be great if these areas that change color also provide a popup that tell the user what it is they are selecting.  Each of the areas (CPU + Memory, PCIe, IO Panel, SATA, Chipset) brings up a menu similar to that found in the 'Advanced' section of the BIOS.  Along the bottom are options to enter the advanced mode, change language, or the fan controls: 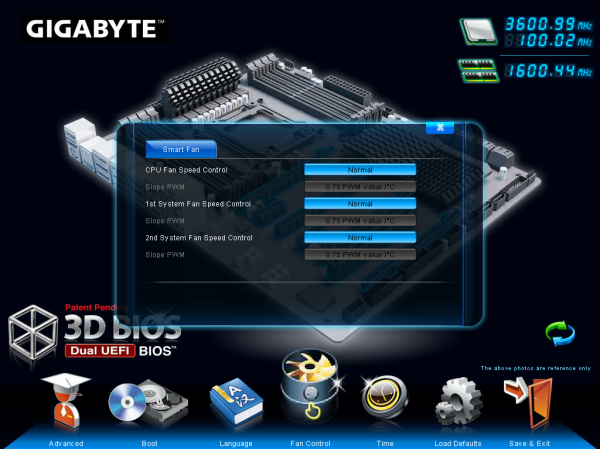 Once again we see an odd-ish system for users to control their fans - by the magical 'PWM Value / ºC' units.  Clearly, we can work out that the higher the number, the quicker the fan ramps up in speed, but there are infinitely better ways to handle this.  At the low level, we have ASRock who utilize 'Levels' of how quickly the fans ramp up, taking out the units altogether, but let us look at this objectively.

The BIOS has access to CPU speeds, CPU temperatures, and the PWM value of the fan.  Given the fan controller used on board, we may also have access to the RPM value of that fan.  It does not take a software genius to code a system that means that the user can utilize a percentage of the peak PWM value for various temperatures, and the software to control the gradients in between a multipoint user-defined system.  If there is access to RPM values, then the system could initiate a test to see what PWM values correlate to what RPM, and how much this is of the max RPM (as the relationship between RPM and power applied is not always linear).  Then give the user a graphical interface in order to control this, apply a multipoint gradient and possible hysteresis with spinning down the fans as well as spinning them up.  I struggle to see the complexity of such a system (maybe there is more to it than meets the eye) given the controls at hand - the nearest solution we have to this is ASUS' technology, which works rather well.

Rant on fan speeds aside, the main set of screens I am usually interested in within the BIOS start in the advanced menu: 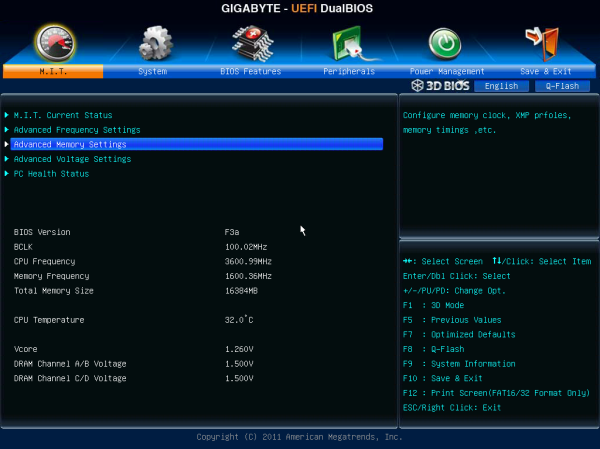 The first screen is our overclocking option menu, designated 'M.I.T.'.  From here, we get more of the information out of the BIOS, such as the BIOS version, CPU speed, memory speed, CPU temperature and voltages.  The five menu options provide us with a more detailed look at the settings of the board, such as frequencies, memory settings, voltages, power delivery and PC 'health' (fan speeds and temperatures).

Other BIOS options of note are in the peripherals section.  Because of using the C606 chipset, we have those SAS enabled ports that also support SATA drives.  As mentioned in the visual inspection, these are specified to be routed to the chipset via a PCIe 1.0 link to ensure data integrity.  If a user would like more speed (i.e. greater than 1.0 GBps), then the option to change the SAS Link Speed Control is now available from the F3a BIOS onwards. 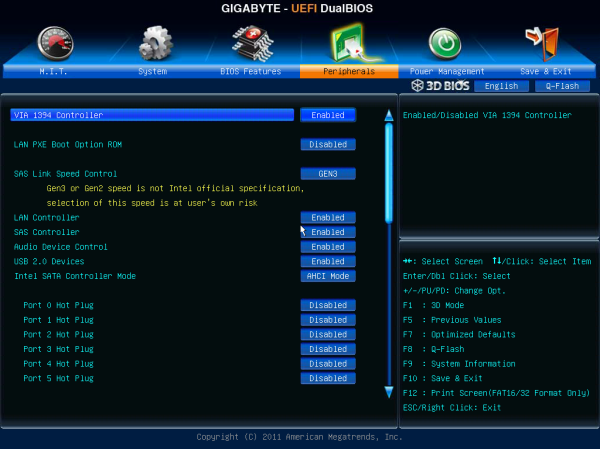