NVIDIA’s second announcement of the day directly ties into the Quadro announcement, which is the announcement of NVIDIA’s second generation Maximus technology. Strictly speaking this isn’t a new technology in and of itself – it’s the same concept of using a Quadro card and a Tesla card together in a single system and is based on the same software – but for marketing purposes NVIDIA is going to be separating Maximus based on the generation of the video cards involved. 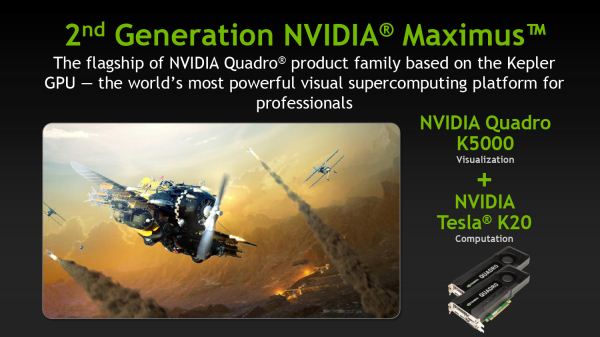 The significance of this announcement isn’t in the branding itself, but rather what it represents for NVIDIA. Because NVIDIA is not launching a GK110 Quadro card (or at least not yet) Maximus’s importance in NVIDIA’s ecosystem has been greatly elevated virtually overnight. For the Fermi generation all of NVIDIA’s high-end Quadro cards were capable of both high performance rendering and high performance compute, with the Quadro 6000 in particular being a superset of both the Quadro and Tesla families by offering NVIDIA’s best graphics performance combined with their best compute performance. Maximus improved the experience by offloading compute onto a Tesla card – and thereby bypassing the performance penalty of frequently context switching – but Maximus wasn’t strictly necessary for high performance compute with Quadro. 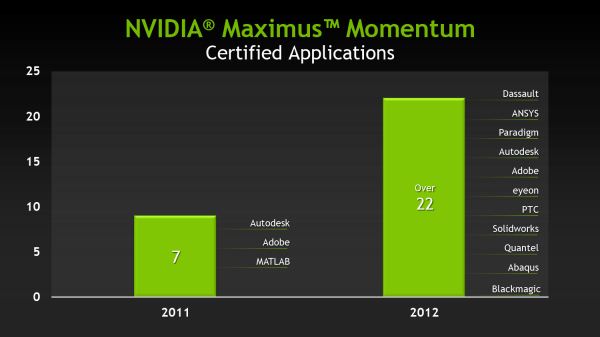 As we mentioned in our quick look at the Quadro K5000, NVIDIA going this route isn’t particularly surprising given the fact that GK104 is such a strong performer at graphics tasks and is far more available than GK110, but it means that NVIDIA is now very reliant on Maximus in all situations that call for a Quadro video card with strong compute performance. It also means that NVIDIA is at the mercy of application developers to a certain extent as developers need to specifically accommodate Maximus. To NVIDIA’s credit the number of programs supporting Maximus has more than tripled in the last year, but that’s still a far cry from the hundreds of applications professionals typically use.

For this reason we wouldn’t be shocked to eventually see a GK110 Quadro card, but until that time this is NVIDIA’s flagship graphics + compute solution.