The MacBook Air is really Apple's mass-market notebook, and as such it's not going to be the target for a Retina Display upgrade, at least not this year. While technically feasible, my guess is a lack of supply kept a rMBA out of the cards for this year. There's also the matter of maintaining its thin profile and battery life in pursuit of a retina display. 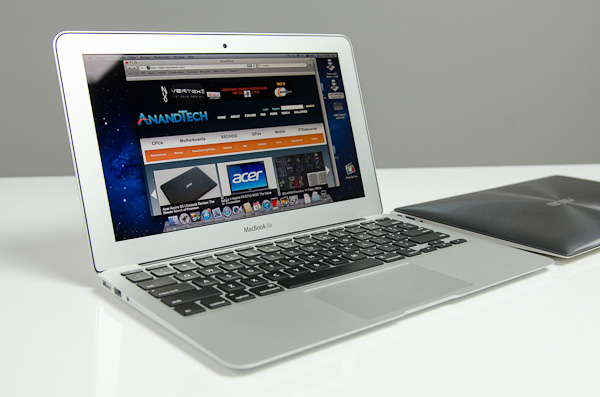 The MacBook Air display continues to be good, and better than most, but no where near what the rMBP delivers and actually a step behind what the competition in the PC space has been cooking up.

If there was one clear trend at Computex this year it's towards IPS 1080p displays in Windows 8 notebooks. ASUS actually pre-empted all of the exciting announcements (rMBP included) with its Zenbook Prime, complete with 11 and 13-inch 1080p IPS displays. As the MacBook Air retains its TN display, for the first time we can actually say that ASUS' Ultrabook offers better viewing angles than the Air. The difference is quite noticeable: 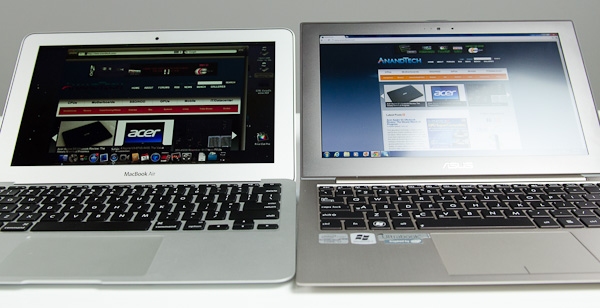 ASUS also enjoys a resolution advantage, but it's not really high enough to make good use of integer DPI scaling (at 2x you get a UI sized for a 960 x 540 display). You get sharpness, and additional desktop area, but not the total package you get with the rMBP. There's no denying that what ASUS has done is better, it's just not perfect. And as Apple has shown us in the past, it's not fond of stopgap solutions.

Brightness, black levels, contrast, color accuracy and gamut haven't changed over the past year. The MacBook Air's panel remains one of the best non-IPS solutions on the market. The problem is that consumer insistence higher quality displays has pushed Apple's competitors to finally deliver more than TN at MacBook Air price points. Sooner rather than later, Apple will have to respond.

Unlike in previous years, there appears to be three manufacturers supplying panels for the 2012 MacBook Air. LG Philips and Samsung return from before, but AUO now joins the fray. It's quite possible that Apple's volumes have grown large enough to justify adding a third supplier - a trend we may see increase in the future, and across more component categories.

As always, you can try to find out what panel is used in your MacBook Air by executing the following command in an OS X Terminal window:

As long as Apple hasn't masked the data, the first line should be the part number of your display panel. The first one or two characters will tell you the manufacturer: LP for LG Philips, LT for Samsung and B for AUO. Anecdotally, LG and Samsung seem to be the most prevalent. In my personal experience with six 13-inch 2012 MacBook Airs and three 11-inch MacBook Airs, the breakdown was as follows:

A thread over on Macrumors places the Samsung/LG split much closer to 50/50, however it's not clear if there's a higher incidence of LG panels in BTO or non-default configurations. We'd need many more samples to really get an idea for how all of this shapes up, so don't put too much faith in the results from my experience.

Apple does its best to ensure that all three panels deliver comparable performance, however there are differences. Let's first start with the numbers: 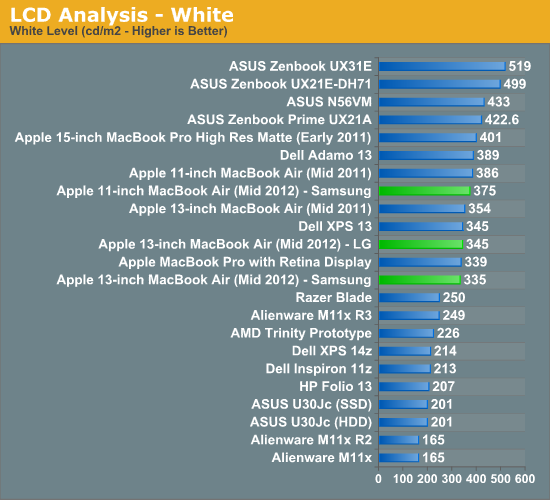 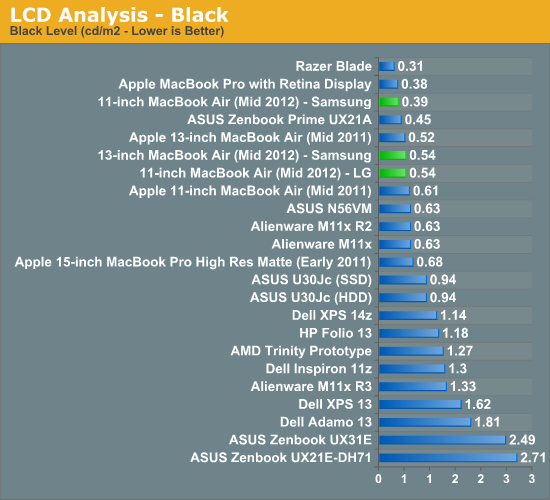 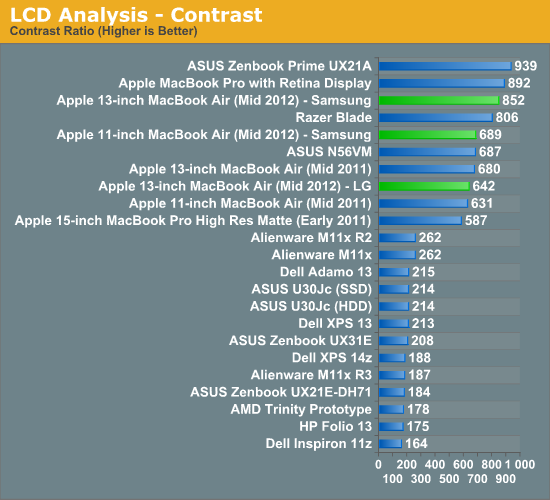 The 13-inch LG panel delivers tangibly worse black levels than the Samsung alternative. There's even a pretty dramatic difference in black levels between even the 11 and 13-inch Samsung panels. It's also possible that there's panel to panel variation at play here that would result in this sort of a difference.

The LG panel is a bit brighter, which helps it reach a decent contrast ratio but the 13-inch Samsung panel's low black levels give it an advantage. Interestingly enough, the 13-inch LG sample performed very similarly to the 11-inch Samsung. I really do wonder how much of this difference is just normal variance between panels. 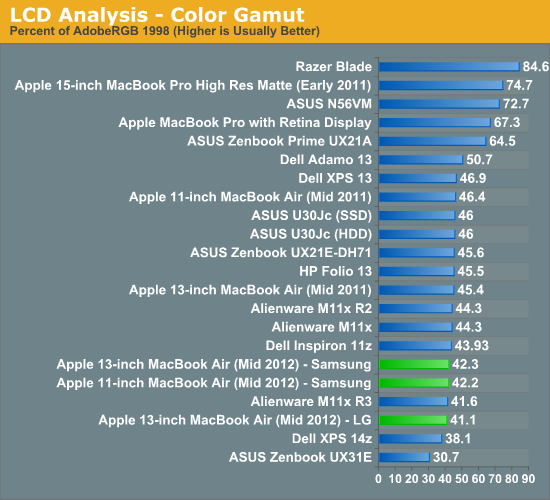 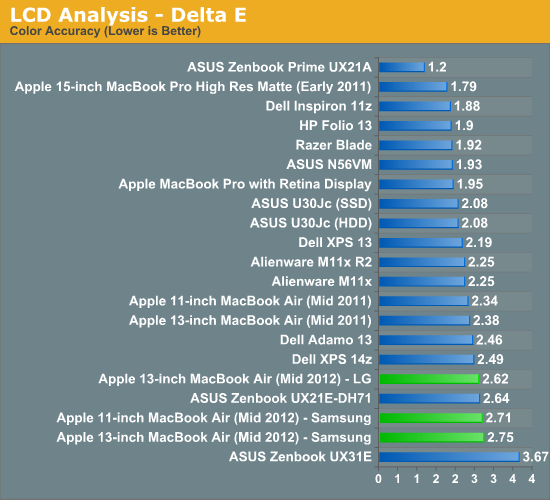 Color accuracy is slightly better on the LG panel, although it's not beyond the noticeable threshold. Color gamut is comparable between the displays.

Independently, neither the Samsung or LG panels is particularly bad to look at. These are still TN panels so you get poor vertical viewing angles, but the quality is still better than the cheaper TNs we often see used in less expensive notebooks. It's when you compare the two or you're used to one that you can really tell a difference: the Samsung panel, particularly when displaying black text on a white background, looks better than the LG. 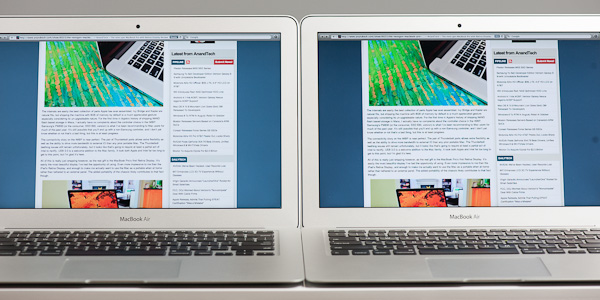 I had some friends over and tossed them a pair of 13-inch MBAs. One had the LG panel and one had the Samsung panel. They used the MBAs and swapped after a short while. Almost instantaneously they could tell the difference between the panels. Everyone significantly favored the Samsung.

I was actually a bit surprised how quickly they noticed the difference. With these type of things I always assume I'm just more sensitive than most, but in this case the difference was noticeable enough to pick out. Everyone added (and I agreed) that the difference was most pronounced because they were able to switch between two. In a vacuum each one seemed fine.

I tried my best to capture the difference between the two panels on camera. The easiest way to describe the difference is text on the Samsung panel just looks darker (mouse over the panel name in the table below): 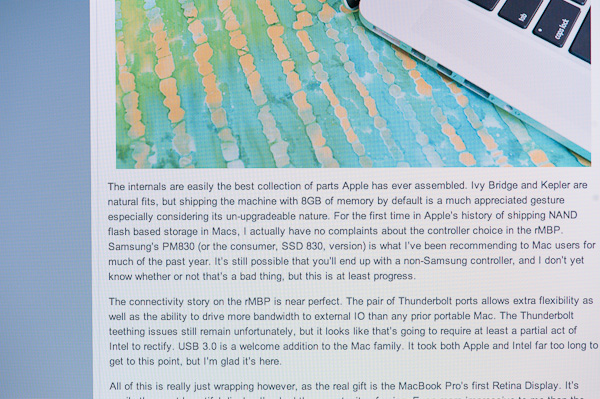 Just like last time, I believe the two panels behave differently in how they react to off-center viewing angles but I couldn't really capture the slight differences on camera. Although I didn't have an AUO equipped MBA on hand, the one I saw in an Apple store looked closer to the LG than the Samsung.

The good news is after a calibration pass using Color Eyes Display Pro, the difference between the two is significantly reduced - to the point where I can no longer tell the two apart: 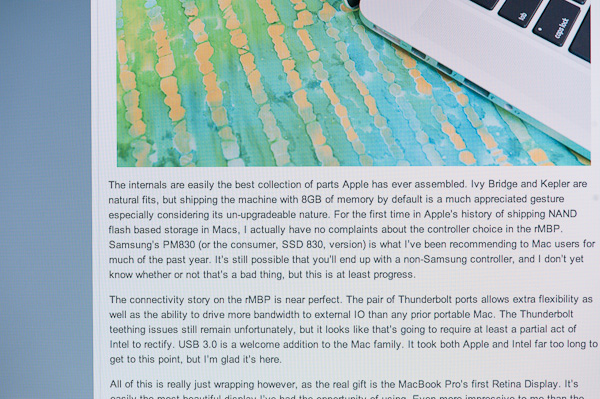 The obvious problem with this solution is you need access to a decent colorimeter or spectrophotometer and calibration software. There are some color profiles floating around the web that may help (I've uploaded mine for the LG here, Samsung here) but every panel is going to be at least somewhat different so this is still not perfect.

Subjectively, I'm fine with the LG panel, although I do like the look of the Samsung better. Both are a bit of a disappointment compared to what you get from the Retina Display in the MacBook Pro however. It's just presently what you give up for portability and cost.

To Make a Retina

The thing about the MacBook Air is that it's already quite minimized on the inside. The vast majority of the chassis is occupied by a battery, and there's no traditional HDD or optical drive to remove for additional space. Apple can't simply toss a much higher resolution panel on the system and call it a day, at least not without a tangible reduction in battery life. 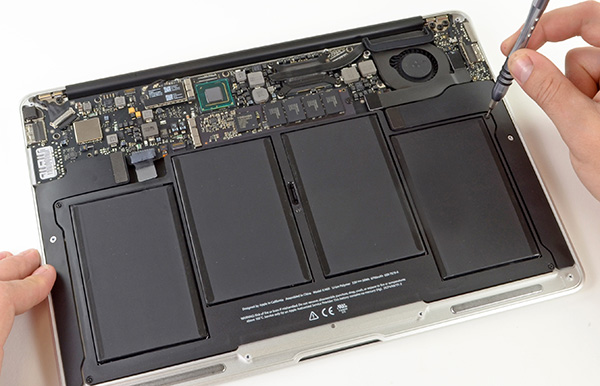 Apple had to give the MacBook Pro with Retina Display a 95Wh battery (up from 77.5Wh) just to deliver similar battery life to the regular MacBook Pro. The higher resolution display requires a brighter backlight to push light through the panel and maintain comparable brightness levels.

The motherboard itself can stand to lose a single chip (the PCH) with the transition to Haswell, but that's not going to give us a ton of space either.

In the short term Apple could opt for a slightly thicker chassis (similar to what happened in the 3rd gen iPad) to accommodate a larger battery. Eventually the hope is that panel efficiency will increase to the point where we won't need significantly brighter backlights.