We’ve taken most of the performance results from our AMD Trinity review and simply added the Ivy Bridge Ultrabook results to those graphs. (If you’re wondering, we’ve dropped most of the thicker laptops from the comparison, though we’ve kept quad-core IVB as a reference point.) This will give you a high level picture of what you can expect from Ivy Bridge ULV relative to quad-core Ivy Bridge, Trinity, Llano, and several other laptop configurations. We’ve also added results from Anand’s preview of the ASUS UX21A, which sports a 1080p IPS panel stuffed into an 11.6” form factor along with an i7 ULV processor, and we have the Dell XPS 13 and HP Folio 13 as representatives of Core i7 and Core i5 Sandy Bridge Ultrabooks, respectively.

As always, should you want to make additional comparisons, head over to Mobile Bench and have at it. Here are a few direct comparisons you might be interested in making: i5 IVB ULV vs. i5 SNB ULV, i5 IVB ULV vs. i7 SNB ULV, and i5 IVB ULV vs. A10-4600M. Our graphs will use abbreviated names for the laptops, just to keep things clean, but here is a quick specifications overview of the laptops we’re including in our charts. Please note that not all products are priced the same, though we’ve done our best to minimize differences in the test configurations on several laptops by installing the same Intel 520 240GB SSD used in the prototype IVB Ultrabook.

We’re only going to highlight two laptops for this roundup: the Ivy Bridge Ultrabook and the ASUS Zenbook Prime UX21A. The latter is going to be similar in most respects, but it’s also a retail product. It has a smaller form factor, a slower SSD, a higher resolution LCD, and a faster Core i7 IVB ULV processor. The quad-core IVB ASUS N56VM is in a different category, obviously, as it uses more power and is significantly larger. AMD’s Trinity is also a bit of an odd comparison, as it’s a full voltage 35W part; hopefully we can get some 17W Trinity laptops in for testing to see how AMD’s Ultrabook alternative fares. In the meantime, keep these considerations in mind. We’ll start as always with PCMark performance. 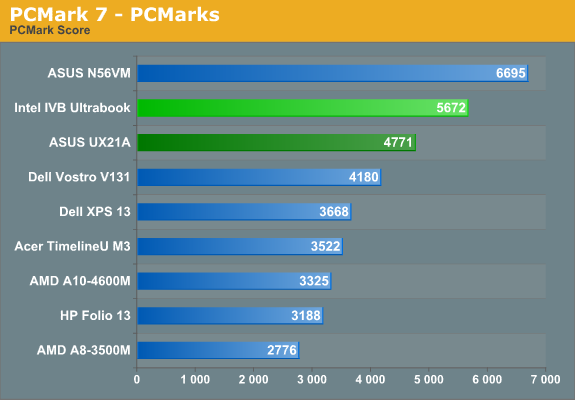 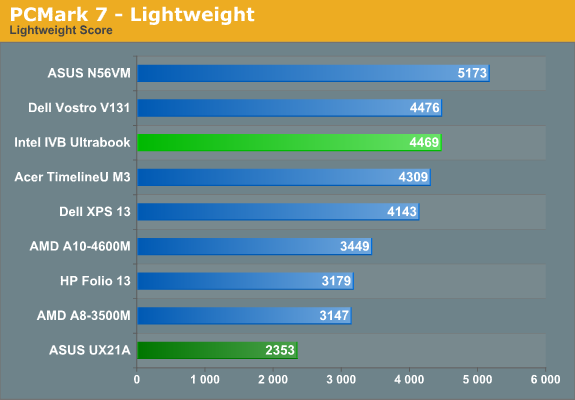 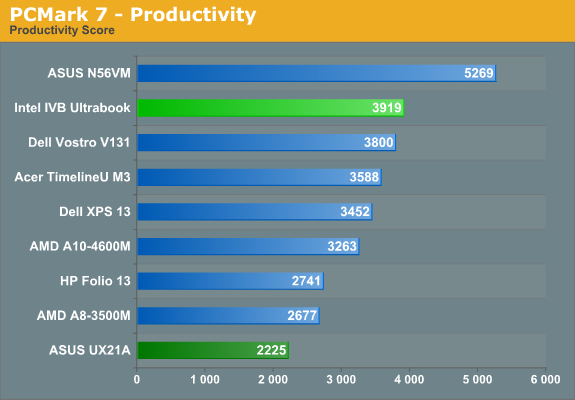 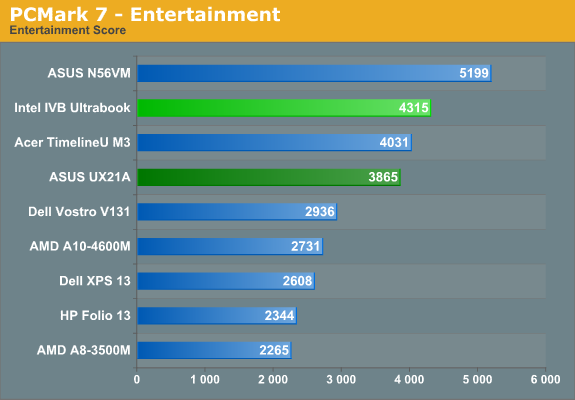 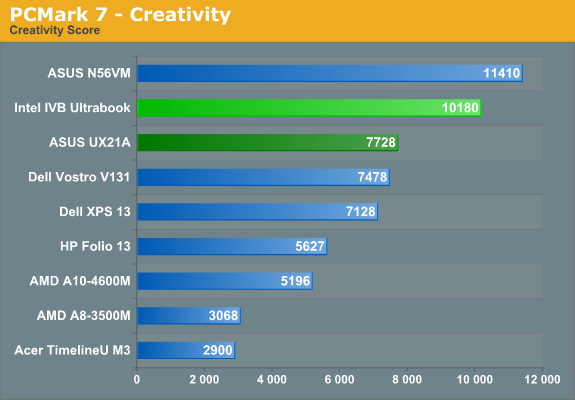 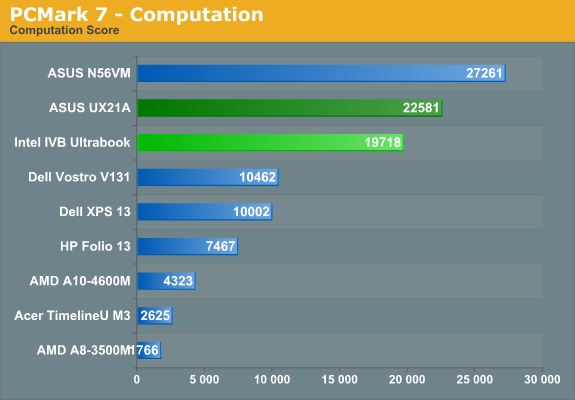 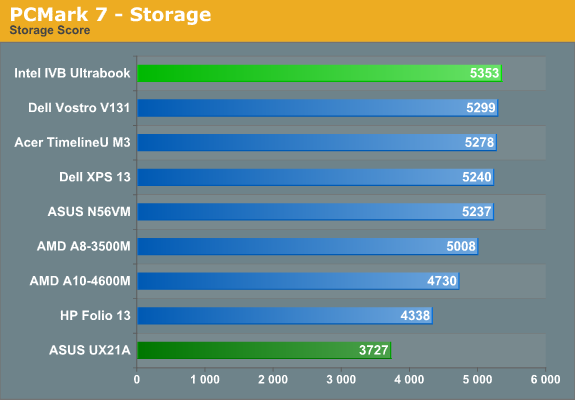 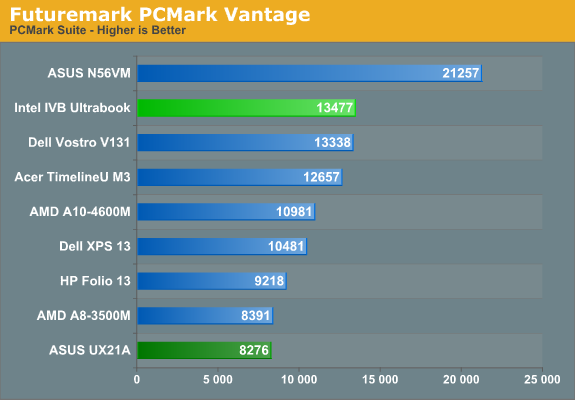 We’ve mentioned before how much PCMark scores tend to skew towards laptops with SSDs. The good news is that all of the laptops in our charts for this article have SSDs; the bad news is that there’s another element at play that can dramatically influence a couple of scores. That element is Intel’s Quick Sync technology, which is supported by PCMark 7 and has a major impact on the Creativity and Computation test suites, and a lesser impact on the Entertainment suite. We don’t know exactly how much the higher Computation/Creativity scores affect the overall score, but it’s definitely a factor. To that end, PCMark Vantage is a nice look at overall performance without any Quick Sync optimizations present.

Given what we just said about Quick Sync, it’s not too surprising that Ivy Bridge—even in ULV attire—dominates many of the PCMark 7 charts. The ASUS UX21A standings are severely hampered by the SanDisk U100 SSD, making direct comparisons with the PUB-RD Ultrabook impossible in PCMark. Look at our prototype scores however and we find that it offers performance that’s generally better than a last-generation standard voltage Sandy Bridge laptop (e.g. the Dell Vostro V131).

Without testing every single laptop with the same SSD (and arguably with and without Quick Sync enabled), PCMark scores only give us an abstract view of system performance. As we’ve noted in the past, every single laptop in our charts is going to be “fast enough” for typical home and business use. The real differentiator between laptops is going to be build quality, form factor, design elements, and what applications you plan on running (e.g. complex number crunching apps would benefit from more CPU performance, while games will benefit from faster graphics). To help flesh out our understanding of Ivy Bridge ULV performance and how it compares to other laptops, we’ve got CPU-centric and GPU-centric tests. 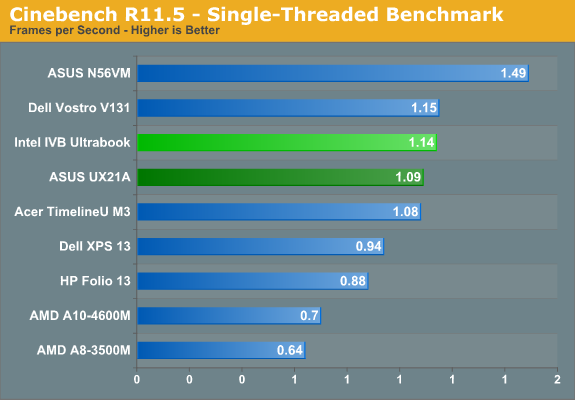 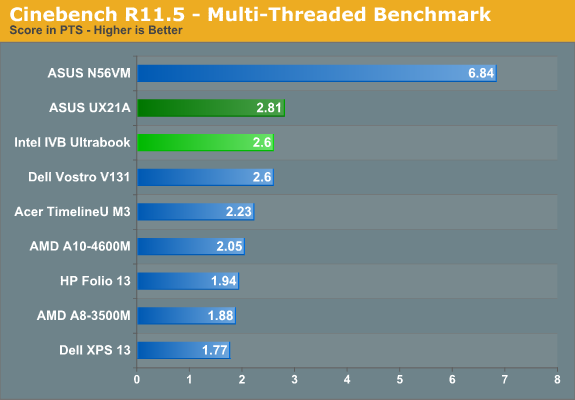 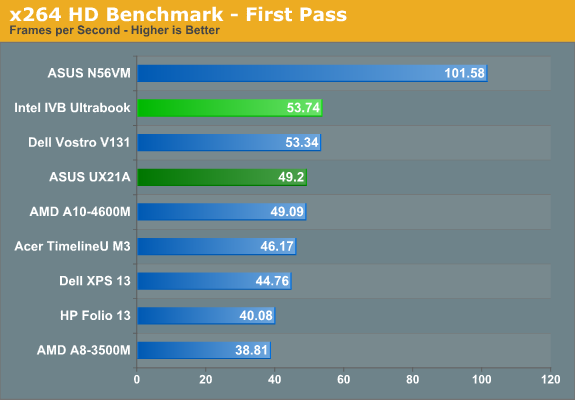 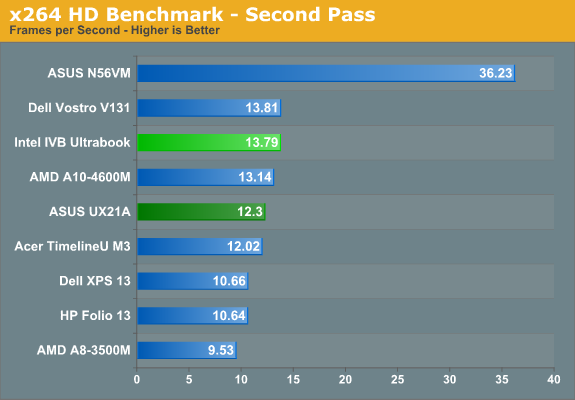 Cinebench is a great look at pure CPU performance, and the workload is such that L3 cache sizes frequently don’t come into play. Obviously quad-core IVB is in a different category, but of the dual-core parts that we’ve included, IVB ULV tops the charts. The ASUS UX21A with its slightly faster Core i7 processor leads in the multi-threaded test, but apparently thermal constraints keep it from hitting maximum Turbo in the single-threaded test and the larger Core i5 Ultrabook comes out ahead. We see a similar situation with the x264 benchmarks, with the Ivy Bridge prototype Ultrabook beating the in-theory-faster UX21A CPU by around 10%.

I have to admit I’m not a big fan of 11.6” laptops to begin with, probably because I’m 6’3” (190cm) and have trouble typing on the smaller keyboards, but thermals are another factor. I’ve stated before that personally, 13.3” or 14” laptops are my favorite size, and I don’t mind 15.6” laptops if they come with added performance and features. Given the comparison between the PUB-RD prototype and the UX21A, I’d rather have a slightly larger Ultrabook. The ASUS UX31A/UX32A on the other hand…it looks like those are going to be the Ultrabooks to beat this round.