This is our the first smartphone we’ve seen with a 28nm SoC, and thus battery life is the big question. Further, the handset includes all the onboard MSM8960 radio goodness as we’ll mention in a bit. The problem with some HTC phones for the longest time was that they shipped with smaller than average batteries - while the competition continued up past 6 Whr, HTC would ship phones with 5 or so. That changes with the HTC One X, which includes a 6.66 Whr (1800 mAh, 3.7V) internal battery. I’m presenting the same battery capacity chart that we did in the Xolo X900 review for a frame of reference.

Like we did with the X900 review, we’re going to present the normalized battery performance - battery life divided by battery capacity - to give a better idea for how this compares with the competition. 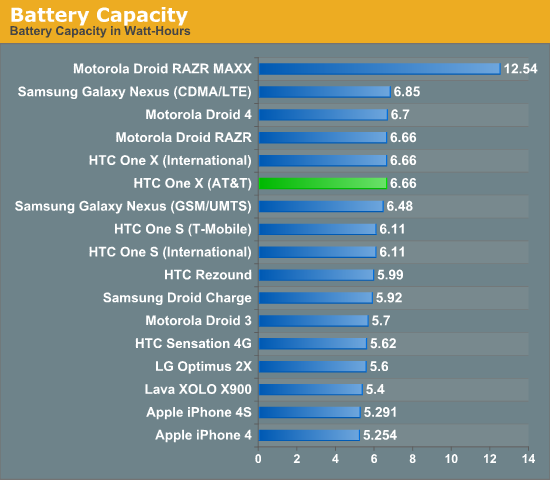 As a reminder, the browsing tests happen at 200 nits and consist of a few dozen pages loaded endlessly over WCDMA or WiFi (depending on the test) until the phone powers off. The WiFi hotspot tethering test consists of a single attached client streaming 128 kbps MP3 audio and loading four tabs of the page loading test through the handset over WCDMA with the display off. 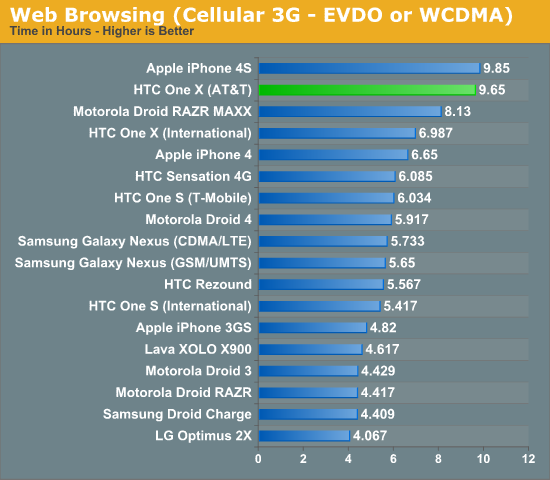 HTC is off to an incredible start with our 3G web browsing tests. Even if you assume that Android and iOS are on even footing from a power efficiency standpoint, the HTC One X is easily able to equal Apple's best in terms of battery life. In reality my guess is that the 4S is at a bit of an unfair advantage in this test due to how aggressive iOS/mobile Safari can be about reducing power consumption, but either way the AT&T One X does amazing here. The advantage isn't just because of the larger battery either, if we look at normalized results we see that the One X is simply a more efficient platform than any other Android smartphone we've tested: 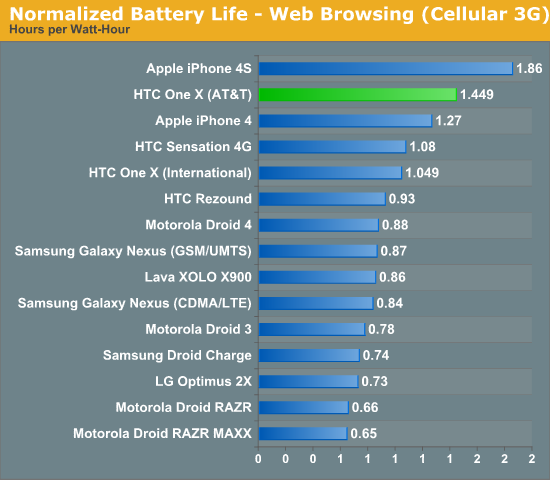 The Tegra 3 based international One X doesn't do as well. NVIDIA tells us that this is because of differences in software. We'll be testing a newer build of the One X's software to see how much of an improvement there is in the coming days.

Moving onto WiFi battery life the AT&T One X continues to do quite well, although the Droid 4 and RAZR MAXX are both able to deliver longer battery life in this case: 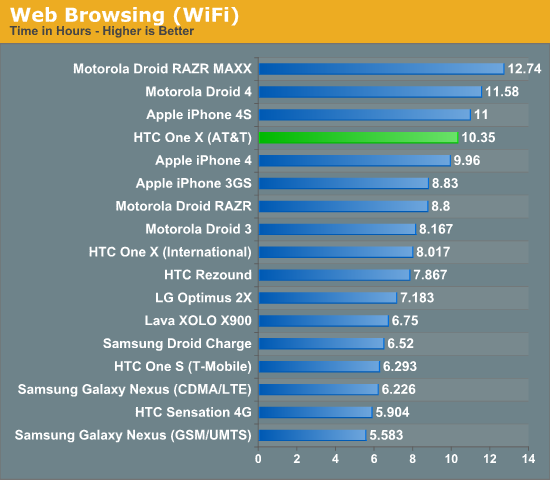 There are too many variables at play here (panel efficiency, WiFi stack, browser/software stack) to pinpoint why the One X loses its first place position, but it's still an extremely strong performer. Once again we see a noticeable difference between it and the international One X. 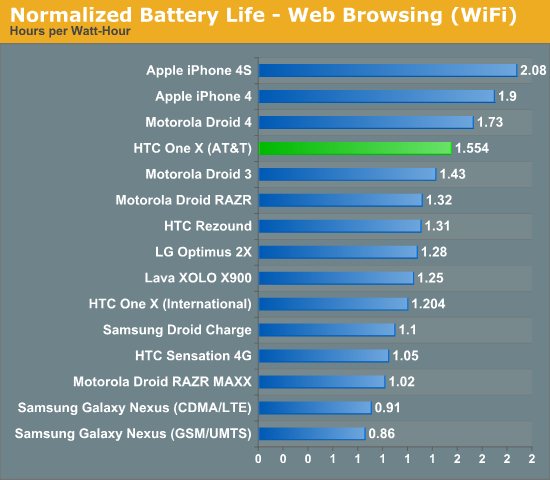 The big question is how well does the AT&T One X do when we're using the MSM8960's LTE baseband? Pretty darn well, when you consider that it's bested only by the RAZR MAXX with its gargantuan battery. Probably the most notable comparison point here is the HTC Vivid or Galaxy Note on AT&T which both are based on the APQ8060 + MDM9200 combination.

As a reminder, the Verizon / CDMA2000 LTE devices here are at a bit of a disadvantage due to virtually all of those handsets camping CDMA2000 1x for voice and SMS. The AT&T LTE enabled devices use circuit switched fallback (CSFB) and essentially only camp one air interface at a time, falling back from LTE to WCDMA to exchange a call. 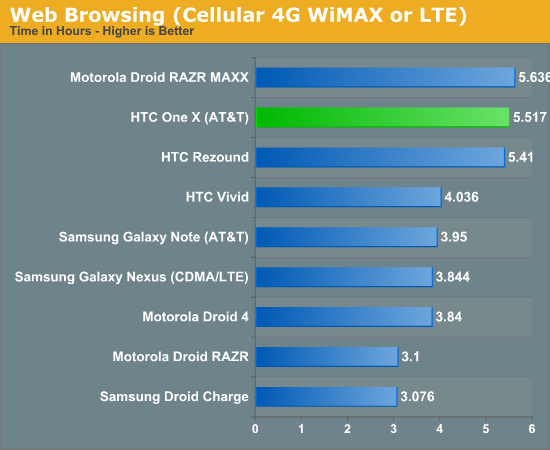 This particular graph doesn't tell the full story however. In practice the AT&T One X seems to last a lot longer using LTE than any LTE Android phone we've tested in the past. Nipping at the heels of the RAZR MAXX, we need to look at normalized battery life to get an idea of just how efficient the new 28nm LTE enabled SoC is: 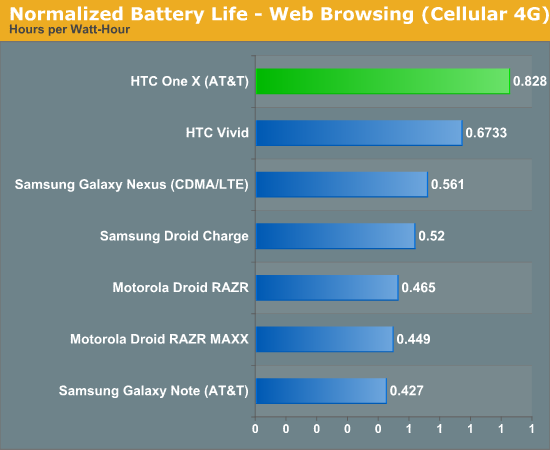 Now that we have 28nm baseband we've immediately realized some power gains. As time progresses, the rest of the RF chain will also get better. Already most of the LTE power amplifiers vendors have newer generation parts with higher PAE (Power-Added Efficiency), and such improvements will hopefully continue to improve things and gradually bring LTE battery life closer to that of 3G WCDMA or EVDO.

Using the AT&T One X as a WiFi hotspot is also going deliver a pretty great experience: 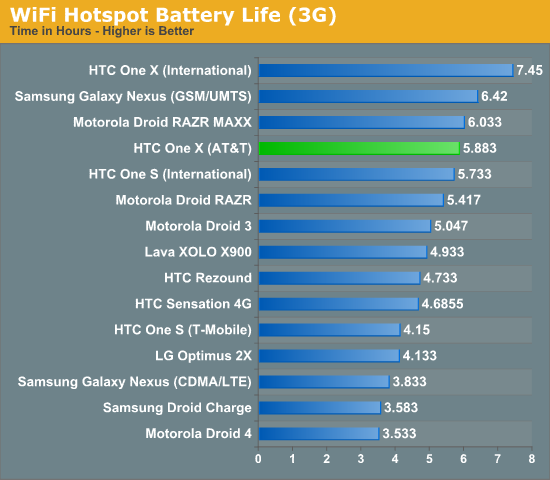 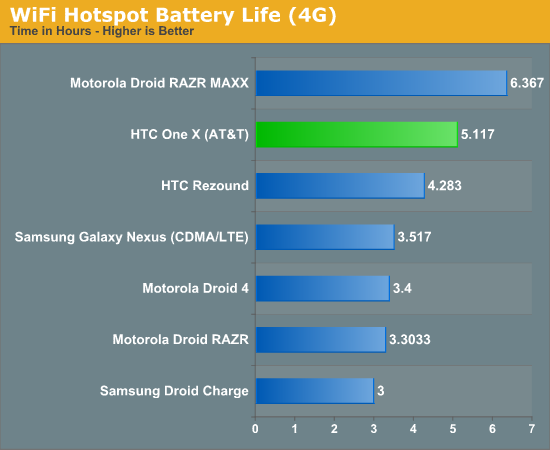 As an LTE hotspot the RAZR MAXX's larger battery is able to deliver a longer run time, however the One X does very well given its battery capacity and size.

Finally, our cellular talk time charts put the AT&T One X in the upper half of our results. Overall the AT&T One X appears to do very well across the board, but it's very strong in the 3G/LTE tests. 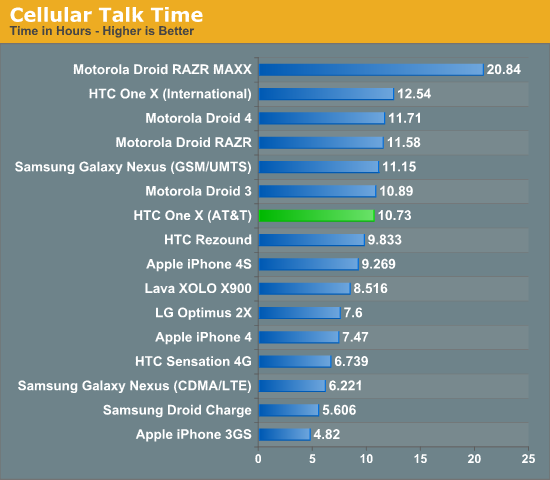 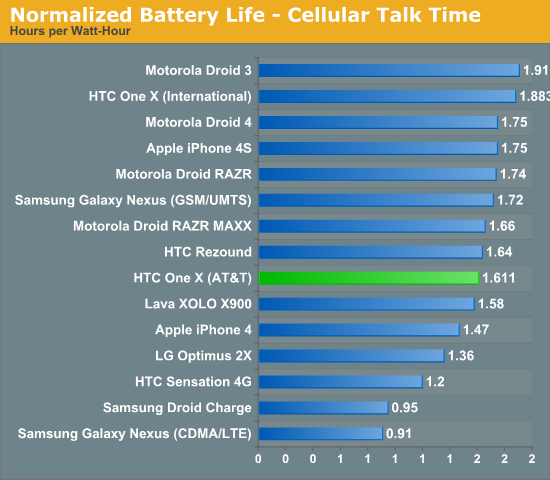