The VelociRaptor's two primary strengths are its 2.5" platter size and 10,000 RPM spindle speed. The combination of the two delivers some of the best random access times you can get from a mechanical hard drive, at least one aimed at the desktop. Indeed we see a tangible performance advantage not only over the latest 3.5" hard drives, but also the previous generation VR. The advantage of the NAND equipped Seagate Momentus XT is just as large. 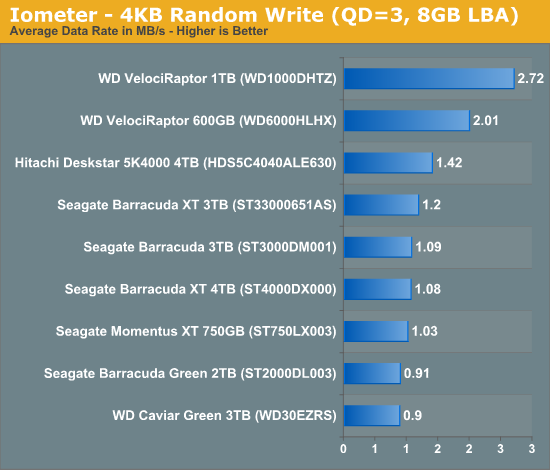 Obviously even the most affordable SSDs deliver better random IO performance compared to the VelociRaptor as you can see by looking at Intel's SSD 320 here: 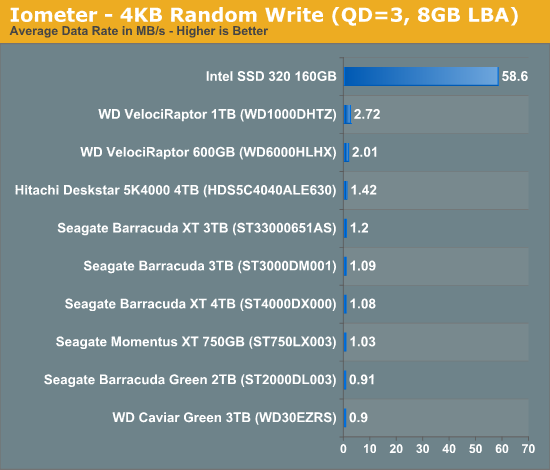 The new VelociRaptor manages a 35% increase in 4KB random write performance over its predecessor, and more than double the performance of Seagate's 7200RPM Barracuda XT. Unlike SSDs, random read and write performance is symmetric on most hard drives so we only really need to look at a single value here. Intel's SSD controllers have typically offered very high random IO performance, so the SSD advantage here isn't unusual.

Ultimately it's this 21x gap in random IO performance that really contributes to why SSDs feel so much faster than mechanical drives. Client workloads aren't purely random in nature (which is why we confine our client random write tests to an 8GB LBA space), but sprinkle non-sequential accesses in the middle of otherwise sequential transfers and mechanical disk performance drops significantly. Small file requests while launching an application, updating file tables, writing to logs, are all examples of small, pseudo-random IO that happen in the background, which can make overall HDD performance drop significantly. While it's true that most client workloads don't require the sort of random IO performance a high-end SSD can provide, it's the additional headroom that SSDs offer that allow performance to remain high regardless of what's going on in the background. We can look at this data another way, instead of average data rate let's look at the maximum number of IO operations these drives can service in a single second: 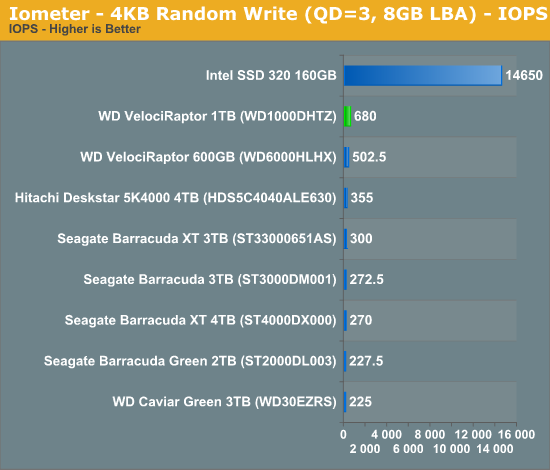 Based on this list, the average hard drive (excluding WD's 10,000 RPM drives) is capable of handling around 275 4KB pseudo-random write operations per second. Clearly that's not sufficient for the majority of client workloads because once you load up full disk encryption, real time virus checking, background email/IM, backup software and go about your normal application usage you always run into IO limited periods where you're waiting on your drive to finish crunching. Upping the spindle speed to 10,000 RPM gives you a bit of a reprieve, more than doubling performance, but that's not always sufficient given the workload.

At the other end of the spectrum we have a stanard 3Gbps SSD, capable of servicing nearly 15,000 4KB write operations per second. No desktop application could be shipped that required this type of IO performance as it would be unusable on any hard drive. The added performance in the case of an SSD doesn't deliver 21x the performance of a VelociRaptor, but it offers enough performance headroom that applications and file accesses will remain as fast as possible regardless of what's going on in the background. SSDs use their headroom to offer a consistent IO experience, regardless of workload.

Sequential performance is easily improved by increasing platter density, buffer sizes and pushing for more aggressive prefetch in the drive's controller. As a result, the SSD advantage isn't nearly as significant. Furthermore, the new VelociRaptor delivers such a large increase in sequential speed that it's able to approach the performance of 3Gbps SSDs: 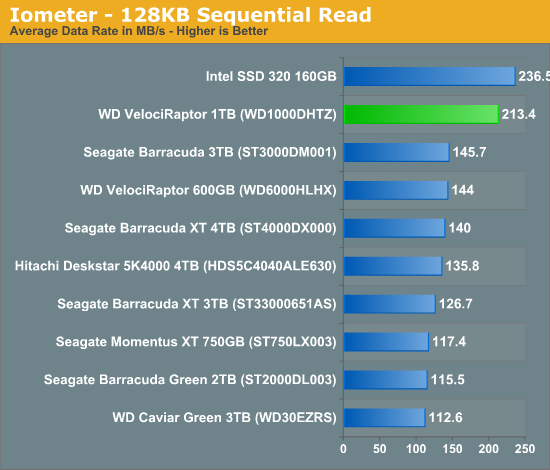 It's because so much of client workloads are sequential in nature that some users don't really feel a dramatic difference in going from a hard drive to an SSD. The only thing I can add is that the users who are constantly frustrated by the speed of their hard drive will be the ones to most appreciate the move to solid state storage. Shifting focus back to the VelociRaptor however, its sequential read speed is quite competitive with mainstream 3Gbps SSDs. Start comparing to 6Gbps drives and the VR is significantly outgunned.

Again, reads and writes don't vary with the VR but compared to the 160GB Intel SSD 320 there's a shift in the standings: 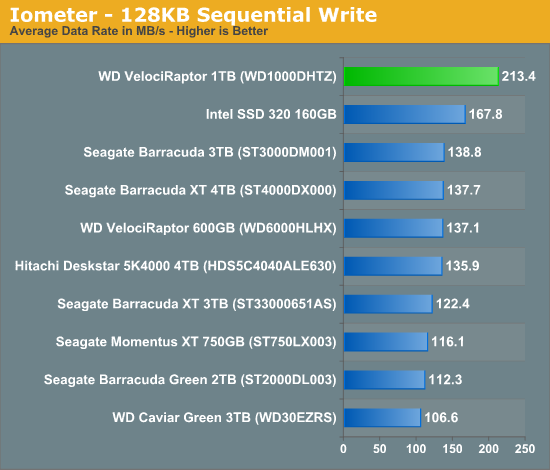 Again, compared to larger or faster SSDs the VelociRaptor would surely lose, I tried to pick an SSD that was more representative of what you could get on a budget or with an older drive. Either way the gains over other mechanical drives are respectable, the new VR definitely delivers in sequential speeds as far as hard drives are concerned.

Performance Across All LBAs

Although logical block addressing works linearly, hard drives are made up of one or more circular platters. Platters are written from the outside inward in order to maximize performance (you cover more data in a single rotation of an outer track vs an inner track). I used HDTach to characterize the new VelociRaptor's performance across all LBAs: 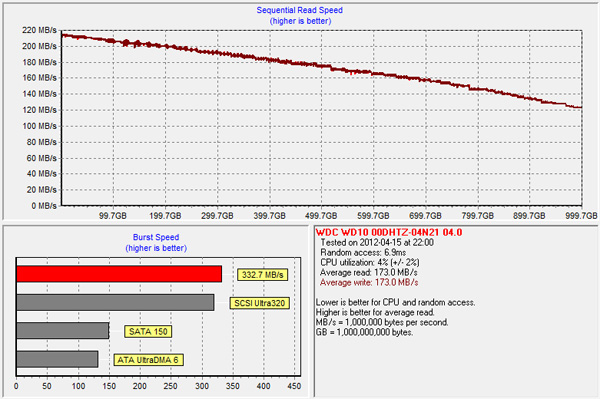