The iPad as a Personal Hotspot: Over 25 Hours of Continuous Use

Verizon makes the decision of which iPad to buy even more difficult by being the only of the two US carriers to enable the personal hotspot option on the new iPad. For no additional monthly fee on top of your data plan your Verizon LTE iPad can act as a wireless hotspot, allowing up to five other devices to use its cellular connection over WiFi (2.4GHz only, unfortunately) or Bluetooth. One device can use the hotspot via the iPad's USB dock cable.

In general the iPad's personal hotspot seems to be better behaved than similar options under Android. I've noticed all too often that Android hotspots will either stop routing traffic after an extended period of use, requiring either cycling the radio states on the hotspot device itself or in some cases a full reset of the hardware. The iPad wasn't immune to this sort of behavior, it just seemed to happen less than on the Android tablets and smartphones that I've tested. In one test it took only a few hours before I had to reset the iPad to make its hotspot work properly again, while in another case it was only after 24 hours of continuous use that the feature began misbehaving. Overall I am very pleased with the Verizon iPad as a personal hotspot, the bigger issue is the cost of the data that you're sharing with all of those devices.

As I mentioned in our Galaxy Tab 10.1 LTE review, these LTE tablets make great hotspots simply because you are pairing smartphone modems with gigantic (for a smartphone) batteries. The end result is if you have to treat your LTE tablet as a true hotspot (screen off and all), you get great battery life. The new iPad takes this idea to a completely new level since its battery is now squarely in the laptop-sized category, but its LTE modem is still designed to run on a < 6Wh smartphone battery.

Our standard hotspot battery life test involves running four copies of our web browsing battery life test and playing a 128Kbps internet radio stream on a laptop tethered via WiFi to the hotspot being tested. While peak download speeds during this test can reach as high as 1MB/s, remember that these web browsing battery life scripts include significant idle time to simulate reading a web page. The average data transferred over the duration of the test amounts to around 25KB/s if you take into account idle periods.

With the Galaxy Tab 10.1 LTE I tried something different—letting the tethered notebook download at full speed using the Tab's LTE connection. On the new iPad, after nearly an hour of downloads at well over 1MB/s I saw no drop in the battery percentage indicator—it was stuck at 100%. Not wanting to upset Verizon too much, I needed to find a good balance between a realistic workload and something that wasn't going to make me rack up over a hundred GB in overages.

If our standard hotspot test averages around 25KB/s of transfers, I figured doubling it couldn't hurt. I downloaded a sufficiently large file at a constant 50KB/s on a laptop tethered over WiFi to the new iPad to see how long it would last. The result was astounding: 25.3 hours on a single charge 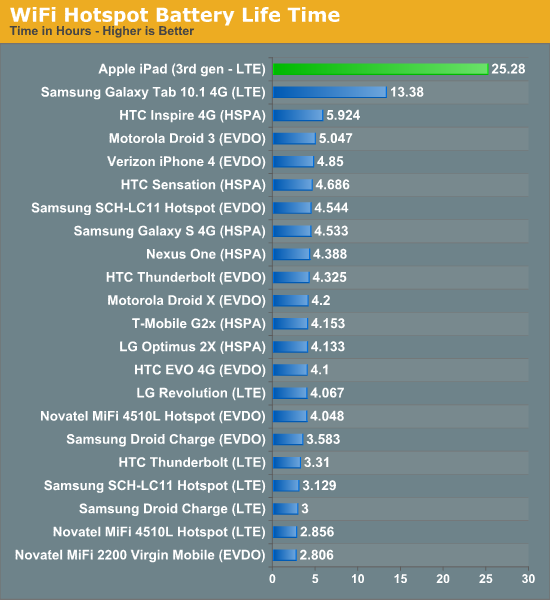 I used up over 4.5GB during this period—almost the entire amount that my $50/month plan gave me, all without having to plug the iPad in to recharge it. That's the beauty of using a 42.5Wh battery to drive a cellular modem that can last a couple of hours on a tenth of that capacity. If you want to use the new iPad as a personal hotspot, you'll likely run out of data before you run out of battery life.

It's a real shame that AT&T decided against enabling personal hotspot on its version of the LTE iPad. It's for this reason alone that I'd recommend the Verizon version, assuming that you're planning on using your iPad in an area where Verizon has LTE coverage of course.