The Apple TV 3 announcement coincided with the release of iOS 5.1 for iDevices, but also included an iOS update for the Apple TV 2 which bumped it to 5.0, build 4099. This update includes a new UI which seems to have received polarized reviews from existing Apple TV 2 users. In the case of the Apple TV 3, this revision is the earliest possible revision of the software. 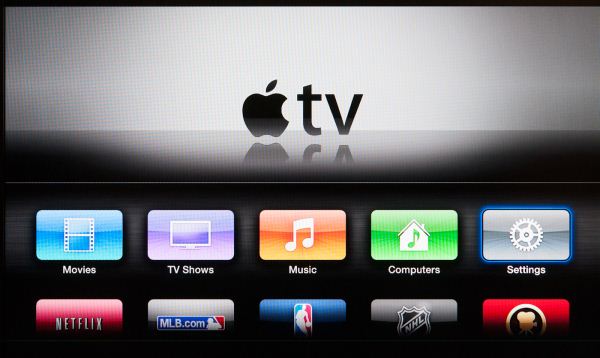 Chief among changes is a new main UI which uses a 4x5 matrix of tiles for its navigation paradigm. The previous Apple TV UI used a sliding media bar arrangement similar in principle to Sony's XMB interface. I can see why Apple changed things around, as over time certain categories (namely Internet) in the original Apple TV 2 interface started getting very long as more services were added.

The new interface consolidates all of Apple's first-party media options, and the settings tab, into the top row, where they're accompanied by a preview. 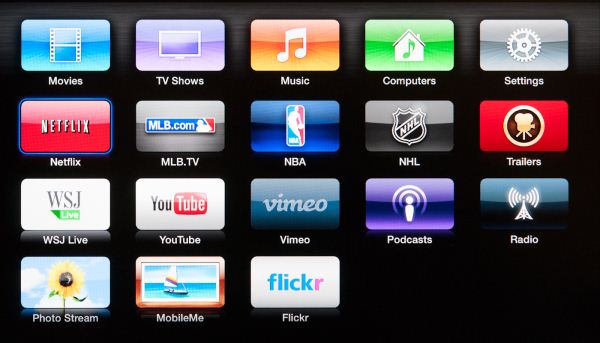 Scrolling down into the second or lower rows in the grid eliminates the preview but exposes all of the tiles. The UI options further inside the respective applications for the most part is the same as it was before. Inside the settings application things are nicely consolidated as well - options which previously were drop downs are now just part of the drill down UI inside settings.

In addition to Apple's own iTunes shows, music, and movie content, I tested 1080p content from Netflix (the example videos), YouTube and Vimeo on the Apple TV 3, which it tackled just fine. I primarily used the Apple TV 2 as a Netflix and YouTube player and occasional AirPlay endpoint, so there ended up being the things I've tested the most in the past few days.

Netflix support has gotten gradually better with each Apple TV software update, and the platform now appears to immediately start playing the SD quality stream until either the 720p or 1080p HD stream is done buffering and ready to play. You can catch this quality jump at the very beginning of a stream if you're careful, and you can see it in the rollovers below. 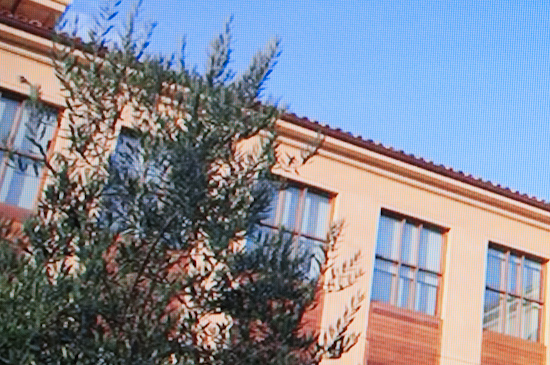 While originally the Netflix behavior of the initial Apple TV 2 wasn't that great, things have come a long way with each respective software update, to the point where Apple TV 2 and 3 are now very competent Netflix streamers. Note that Netflix 1080p video is still H.264 video at 4.8 Mbps with 384 kbps audio (unknown H.264 features or profile). The Apple TV 3 also plays back Dolby Digital 5.1 on the few Netflix videos which have it enabled. 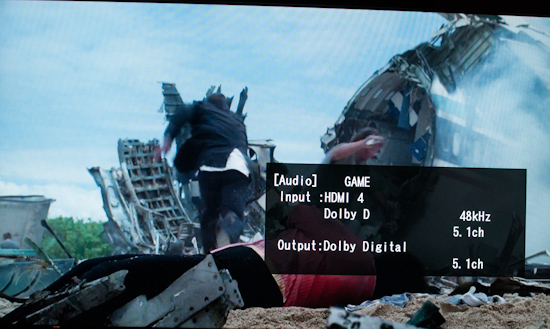 What's still lacking are indicators for what things you've already watched (or how much you've watched) - the resume or play over dialog which lets you know whether you're watching the same episode again only appears after you've selected and started playback. There are other things as well which could be fleshed out a bit more, but the glaring things (selecting the most optimal stream, closed captioning support, thumbnails while seeking, etc.) have been addressed during the Apple TV 2's lifespan and are thus inherited into the Apple TV 3. I'd still also like to have playback quality indicators (the PS3's stream quality and audio quality indicators remain the best out there) but doubt that those would jive with Apple's minimalist UI design philosophy.

One of the other new things is iTunes Match support. If you've subscribed, you can quickly enable this and stream matched media directly from iCloud. There's a buffer period before each song starts while the song is downloaded (the n+1 song is also buffered) but other than that if your internet connection is fast enough there's not much of a problem streaming everything over the internet at all. The initial library download process did take a while on my 22k song library, however after that initial sync things seem to be decently speedy.

When it comes to purchased TV Shows and Videos, the same applies. You can select from any of the media you have previously purchased, which buffers for a short period and then becomes available to play. Subsequent playback of iTunes video seems to happen instantaneously if it's still in the 8 GB cache, whereas music seems to result in the Apple TV going back out to the internet every time. Under settings, iTunes store, you can also change the video resolution between SD, 720p, and 1080p as well.

Photo stream was introduced in one of the previous Apple TV software updates, and it (along with most of the other features) seem to be inherited in their previous form into the "5.0" Apple TV software release. The only frustrations here are lack of multiple Apple ID account support for photo streams and iTunes accounts, though I suppose you can always sign out and log in again, tedious as that is.

WiFi display on the Apple TV 3 appears to happen at the same resolution as the previous model, or at least from my iPhone 4S. That is to say that it isn't quite native but rather downsampled on the device, encoded, then shipped over to the Apple TV. I haven't had a chance to try the Apple TV 3 with a Mountain Lion install or with the iPad 3, but with Mountain Lion and AirPlay you can stream additional media sources over AirPlay as well.

The downsides with Apple TV continue to be what they were in the previous version. There's no support for some of the other up and coming video streaming services like Vudu (who offers up to 9 Mbps 1080p streaming) or Hulu or countless others. In addition there's no easy way to simply play back things from an AFP network share, and probably never will be. Apple hasn't crafted a pirate-friendly box with Apple TV, and until the Apple TV 3 gets jailbroken and XMBC port, it just isn't a fit for that crowd at all. It also remains to be seen how much the combination of 512 MB of LPDDR2, single core A5, and SGX543MP+ graphics help that particular application out. 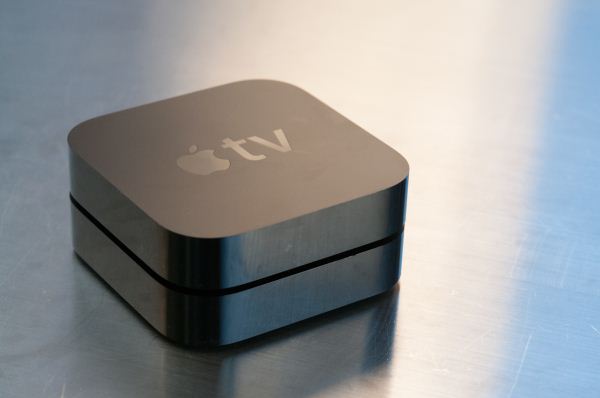 The Apple TV 3 really is an obvious evolution of the Apple TV 2 design - that much should be clear at this point. The new model adds 1080p support to all the included media sources without getting sluggish, and adds support for more efficient H.264 by leveraging the A5's newer video decoder. 2.4 and 5 GHz WiFi reception is correspondingly better as well thanks to the combination of both a newer WiFi+BT combo chip, and the addition of one more antenna. Meanwhile, power draw has stayed exactly the same. The rest of the package is really unchanged, and the update doesn't do anything to fundamentally change the way that Apple TV fits into the home theater picture. If you didn't find the Apple TV 2 appealing for reasons other than being limited to 720p, there's really little chance that you'll find the Apple TV 3 any different.

If you're squarely entrenched in the Apple ecosystem, there's really no reason to not have an Apple TV. AirPlay mirroring (essentially WiFi Display) and AirPlay for audio (which is ALAC at around 1 Mbps) continues to be a big selling point. In addition iCloud support for all your purchased iTunes store content is an additional plus. On the other hand, if you've been holding out for a 1080p Netflix streamer, AirPlay endpoint, and iCloud box, the Apple TV 3 isn't bad.