HTPC enthusiasts are often concerned about the quality of pictures output by the system. While this is a very subjective metric, we have decided to take as much of an objective approach as possible. Over the last year or so, we have been using the HQV 2.0 benchmark for this purpose.

The HQV 2.0 test suite consists of 39 different streams divided into 4 different classes. The playback device is assigned scores for each, depending on how well it plays the stream. Each test was repeated multiple times to ensure that the correct score was assigned. The scoring details are available in the testing guide on the HQV website.

We first played back the benchmarking clips off the Blu-ray, but the scores recorded below are for standalone M2TS playback using CyberLink PowerDVD 12. Our take is that it is standalone files (such as those taken using consumer camcorders and smartphones) which require video post processing more than the already carefully transferred Blu-ray content. If certain driver post processing features are available only for Blu-ray playback, then, it is as good as not being available for consumers to take advantage.

In the table below, we indicate the maximum score possible for each test, and how much the 7750 was able to get with AMD's Catalyst 12.1-based launch drivers.

We were not able to match what AMD claimed. In all probability, the difference is in the chroma upsampling scores. We already covered this in the Llano review. To recap, the image below is a screen capture while playing the HQV benchmark clip from a Blu-ray ISO on the AMD A8-3850. Note that the light red fringes along the edgs are uniform and extend to the right and the left before tapering off. 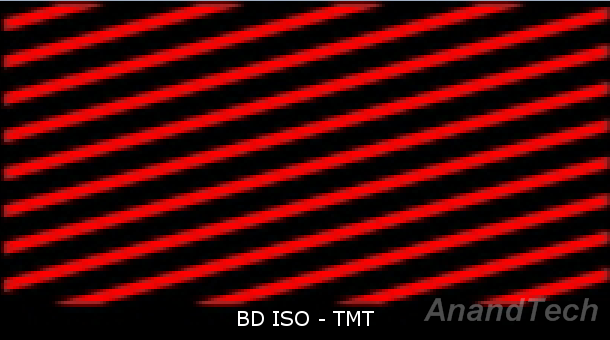 Now, let us look at the screen capture when the M2TS is played back using PowerDVD 12 on the Radeon HD 7750. 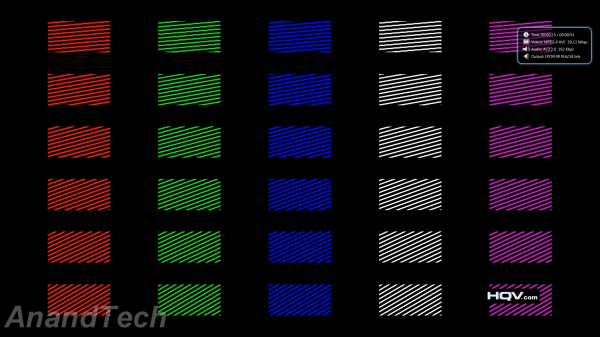 Zoom into the red stripes on the third row (in the original screenshot) and you can see for yourself that we have some ghost samples extending above and below the actual line of pixels. The screenshot is not at the exact timestamp as that of the Llano sample reproduced above, but the reader should be able to get a general idea of the problem we are hinting at. Readers interested in finding out more about the source of this problem should read up this excellent piece to get more information.

We notified AMD about this issue during the Llano review, but action doesn't seem to have been taken even after 6 months on what is clearly a driver issue. Note that we are not using MPC-HC (which might introduce its own errors in the renderer) in this case, but a standard off-the-shelf commercial player in CyberLink PowerDVD 12. Hopefully, AMD wakes up to this issue soon.