Once again, the SilverStone Precision PS07's assembly was another exercise in deja vu. SilverStone includes an instruction manual that details a very specific way to assemble the enclosure from start to finish to make things as easy as possible, and for the most part it's on the mark. Their cases often feel like puzzles with very specific solutions, and thankfully you don't have to figure them out on your own. 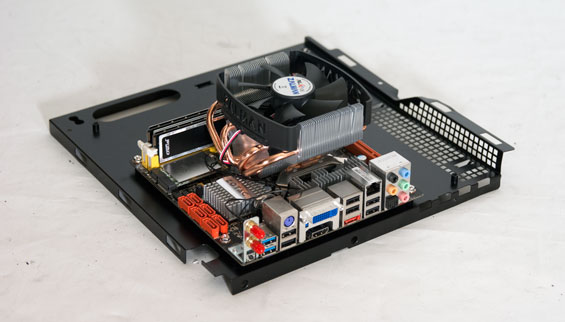 The PS07 comes apart in a few different places. You won't have to remove the front fascia, but the side panels, top panel, motherboard tray, and drive cage all come out. You don't necessarily have to do all of these things, but they can help. SilverStone includes standoffs built into the motherboard tray that makes mounting the board a breeze, but I found locking the tray back into place to be on the awkward side. When I assembled the TJ08-E I opted not to remove the tray to install the board, and that turned out to be the right choice. With the more easily removable drive cage it's simply not necessary. 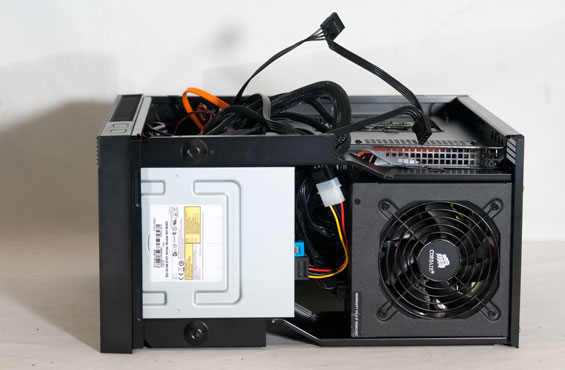 While ordinarily the power supply is one of the last things I'd install, it pays to pop it into the PS07 early. One of the last things to go in should actually be the optical drive, as you run the risk of dealing with some cable clearance issues in the PS07. Theoretically you can get a 180mm power supply into this enclosure, but honestly you'll want to use a 160mm unit instead like I did for this review build. This is also a situation where using a non-modular power supply may actually be beneficial; there's space behind the motherboard tray to stash excess cables, and modular connections in the PSU can add to the overall length of the unit. 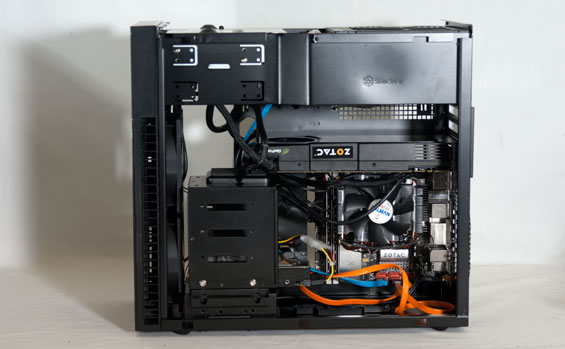 If you're using a tower-style cooler for the CPU heatsink, you'll have to remove the hard drive cage to install 3.5" drives. There's a mount on the bottom of the enclosure for a single 2.5" drive (SSD, naturally), and the ports of the drive line up with the anterior of the motherboard tray nicely, making it reasonably easy to wire. Finally, getting a card like our GeForce GTX 580 in may require some work depending on your motherboard layout, but I found most of the effort involved was the result of our Zotac board packing things in too close to the PCI Express x16 slot.

Given the close quarters of the PS07, the build remains nonetheless surprisingly clean. This isn't the easiest case in the world to assemble, but for its somewhat unusual design there's still a clear logic to how things come together. It's a sharp contrast against some of the Lian Li enclosures I've tested recently, where Lian Li's engineers seem to have their own internal logic they're going to work off of whether the rest of us understand it or not.