And Then We Get to the LCDs…

Sadly, as much as some areas of the laptops are improved over other offerings, the displays in general are nothing to get excited about. The Acer LCD is a bog standard model while the ASUS goes for a higher HD+ resolution and one of the brightest backlights we’ve tested on a laptop; unfortunately, contrast ratio along with color quality and gamut are all in the dumps. Let’s not dwell on it too much before we see the charts. 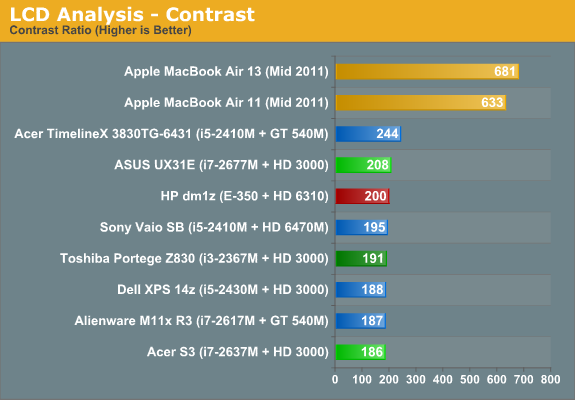 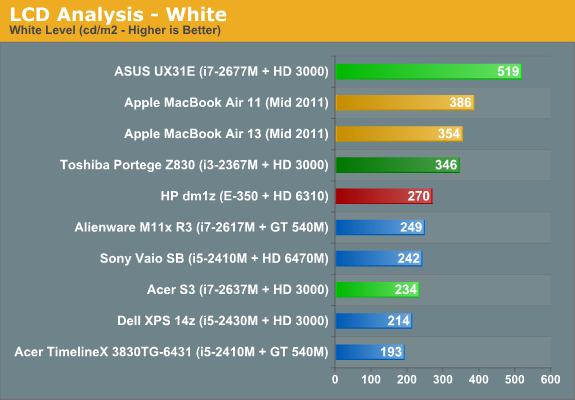 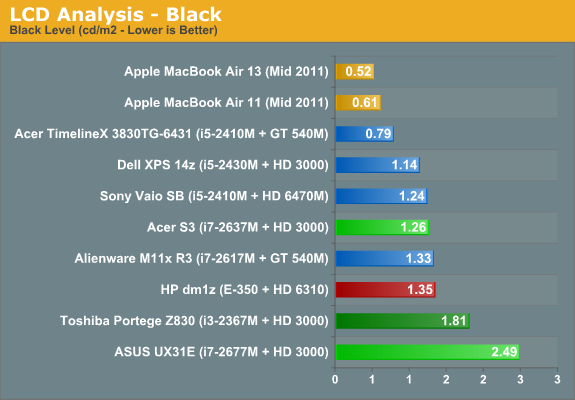 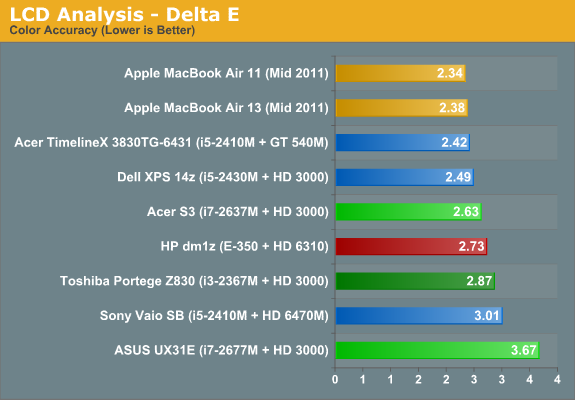 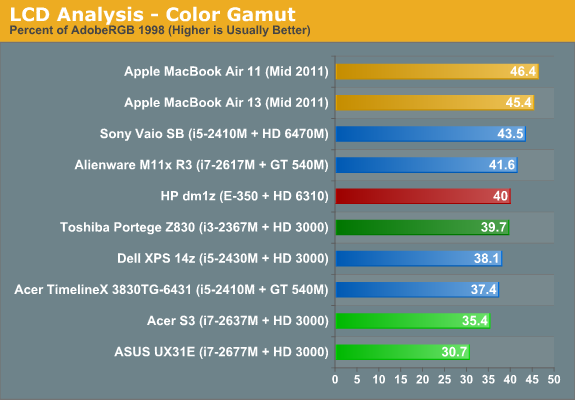 Of the laptops we’ve reviewed recently, the UX31E has the brightest LCD by far…along with the highest black level by far. The result is a contrast ratio that places near the top of our selection of eight mediocre displays. The Acer S3 on the other hand has middling white and black levels but the lowest contrast of the eight tested laptops. Continue on to color accuracy and gamut and things go from middling to lousy. The ASUS’ incredibly bright backlight results in very poor post-calibration Delta E of 3.67, with some colors in the double digits. Turn to the color gamut and we find part of the reason for that: the gamuts of both these ultrabooks are very poor, which means several of the test color patches are outside of their color range.

Viewing angles are typical of TN panels, with the vertical shots showing major color shifts. The ASUS panel does a lot better than the Acer, though neither one is great. We’ve got excellent 10.1” IPS panels now shipping in $400 tablets; why can’t we get a similar panel in 13.3” trim in a $1200 laptop? I’m probably preaching to the choir, but seriously: first IPS panel in a 13.3” laptop for under $1000 gets an Editor’s Choice award (as long as the rest of the laptop doesn’t completely suck).

In the grand scheme of things, though, how much do the LCD test results really matter? That’s a more difficult question to answer. Some users will never know what they’re missing, while others like to edit photos or watch movies and will immediately notice the poor contrast and colors. The color quality is a potential deal breaker for me, but if you’re just surfing the web and working in office applications, it really doesn’t make that much of a difference. For a go-anywhere laptop, the ASUS’ ultra bright LCD is definitely a plus—I took it outside and maxed out the backlight intensity and was still able to view the display contents without complaint, which is more than I can say for the laptops that max out at 200-250 nits.

When we look at the target the ultrabooks are trying to take down—Apple’s MacBook Air—the LCD results in particular are unacceptable. The MacBook Air displays are by no means perfect (I'd like a color gamut of at least 70% AdobeRGB for example), but notice how out of the tested laptops they place at the top in every test other than maximum brightness? That's what we'd like to see from the competition. ASUS at least made some effort to be different by going with a 1600x900 LCD with a high maximum backlight intensity, but Acer could have literally picked up any other 13.3” LCD and put in a similar showing. Take the price and OS out of the equation and the MacBook Airs are the superior “ultrabooks”, for two reasons: build quality and display quality. Acer improved their build quality over most of their budget offerings, and ASUS is right there with Apple in terms of build quality, but >500:1 contrast with >350 nits maximum brightness is the minimum I’d like to see, and really we’re talking about $1000+ laptops so it’s not too much to ask for an extra $50 to improve the displays.