There will be a number of GTX 560-448 cards launching today; most of NVIDIA’s partners will be involved, including Asus, EVGA, Gainward, Gigabyte, Inno3D, Palit, MSI and Zotac. Given that these will be custom designs no two cards will be alike, and while performance should be similar (accounting for clock differences), thermals and noise are going to vary with the design.

The card we’ve been sampled with is Zotac’s entry, the Zotac GeForce GTX 560 Ti 448 Cores Limited Edition. Zotac’s design is based on their existing GTX 570 design, which is an open-air cooler with copper heatpipes running up from the GPU to the heatsink. It’s effectively a bigger, more capable version of the GTX 560 Ti reference cooler, which means it shares the temperature and noise benefits of that design at a cost of dumping most of the heat produced inside your computer case.

While this isn’t an AMP product – AMP being Zotac’s factory overclock brand – Zotac  is still goosing their GTX 560-448 by a bit. It will ship at 765MHz core instead of 732MHz (a 4% boost), while memory speeds are unchanged. It’s a bigger factory overclock than we’ve seen in some other cards, but 4% won’t make a huge difference in performance most of the time.

Breaking down the card it’s quite similar to other single-fan open-air coolers we’ve seen such as the reference GTX 560 Ti. Airflow is provided by a center fan with heatsinks covering the most important bits. The 2 6pin PCIe power sockets are placed at the rear of the card, which is not ideal but not a huge problem as the card is not particularly long.

For display connectivity Zotac is once again using their expanded offering. Along with the 2 DVI ports common on high-end NVIDIA cards, Zotac is also offering a full size HDMI port, and rare for an NVIDIA based card, a full size DisplayPort. Zotac achieves this by moving one of the DVI ports to the 2nd slot on the card’s bracket, which is a convenient location but further restricts the amount of air the card can eject outside of a computer case. 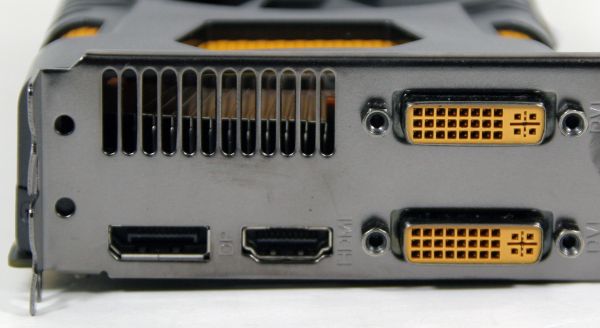 Along with the card, Zotac is continuing their tradition of bundling a game with their high-end cards. This time Zotac's North Amerian office is partnering with Electronic Arts, and they will be including a voucher for Battlefield 3 with their GTX 560-448 in North America. We’ve always been big fans of video cards including good games, so we’re glad to see Zotac continuing this tradition.

Rounding out the rest of the package is the typical collection of odds & ends: PCIe power adaptors, a multi-lingual quickstart guide, Zotac’s collection of OEM trialware, and a DVI to VGA dongle.

Between the overclock and the inclusion of Battlefield 3, it should come as no surprise that Zotac is charging above NVIDIA’s MSRP for the card. Zotac will be charging $299, $10 over MSRP – the overclock isn’t particularly impressive, but if you're in a territory that gets BF3, $10 for BF3 is a good deal any day of the week.