Just to make this clear, TLC isn't anything new. For example Hynix had a 32Gb 48nm TLC die in 2008. This is because TLC was originally used for devices like USB flash drives, where its poor endurance would be negligible. Most SSD OEMs have been toying with TLC SSDs for at least a year now but we haven't seen any commercial products. OCZ had originally planned to introduce its first TLC based SSD in the Q1 2012, however TLC pricing simply hasn't made sense yet. Unless OCZ can leverage a significant cost savings over 2-bit-per-cell MLC, the added headaches of bringing a lower performing TLC part to market don't make sense.

TLC does require controller and firmware support. In the client SSD space only OCZ has been aggressive with announcing that its Indilinx Everest controller supports 3-bit-per-cell NAND.

Adding controller support for an extra bit per cell is more than just updating the datasheet and claiming it works. The ECC engine needs to be updated as the controller will face more frequent and more severe errors with TLC NAND (and its associated lower endurance rating). 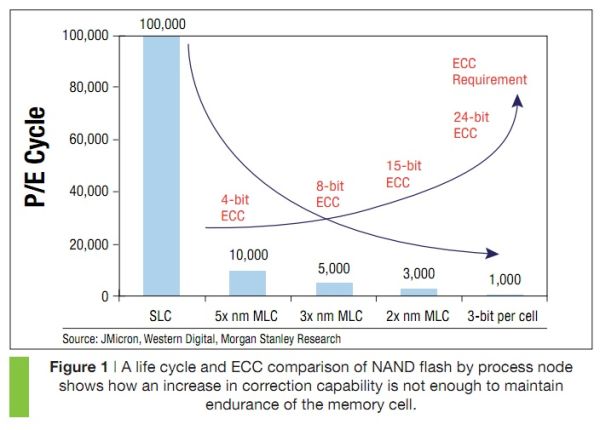