With all of the extra connectivity there is to test with the Thunderbolt Display we can't forget the actual panel testing. Thankfully this part is pretty simple, the display characteristics are near identical to the 27-inch LED Cinema Display we reviewed last year.

We report two main quality metrics in our display reviews: color accuracy (Delta-E) and color gamut. Color gamut refers to the range of colors the display is able to represent with respect to some color space. In this case, our reference is the AdobeRGB 1998 color space, which is larger than the sRGB color space. So our percentages are reported with respect to this number, and larger is generally better.

Color accuracy (Delta E) refers to the display’s ability to display the correct color requested by the GPU and OS. The difference between the color represented by the display, and the color requested by the GPU is our Delta-E, and lower is better here. In practice, a Delta E under 1.0 is perfect - the chromatic sensitivity of the human eye is not great enough to distinguish a difference. Moving up, a Delta E of 2.0 or less is generally considered fit for use in a professional imaging environment - it isn’t perfect, but it’s hard to gauge the difference. Finally, Delta E of 4.0 and above is considered visible with the human eye. Of course, the big consideration here is frame of reference; unless you have another monitor or some print samples (color checker card) to compare your display with, you probably won’t notice. That is, until you print or view media on another monitor. Then the difference will no doubt be apparent.

As I mentioned in our earlier reviews, we’ve updated our display test bench. We’ve deprecated the Monaco Optix XR Pro colorimeter in favor of an Xrite i1D2 since there are no longer up-to-date drivers for modern platforms.

For these tests, we calibrate the display and try to obtain the best Delta-E we can get at 200 nits of brightness for normal use. We target 6500K and a gamma of 2.2, but sometimes the best performance lies at native temperature and another gamma, so we try to find what the absolute best performance could be. We also take an uncalibrated measurement to show performance out of the box using either the manufacturer supplied color profile, or a generic one with no LUT data. For all of these, dynamic contrast is disabled. 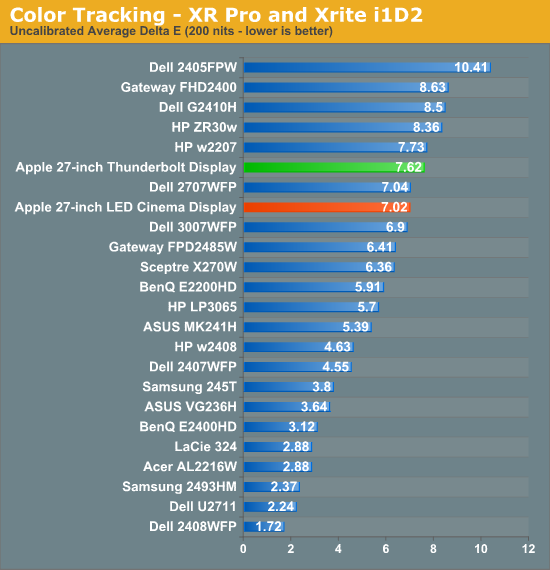 Uncalibrated performance remains fairly similar to last year's LED Cinema Display, however once calibrated the Thunderbolt Display is spot on with its predecessor: 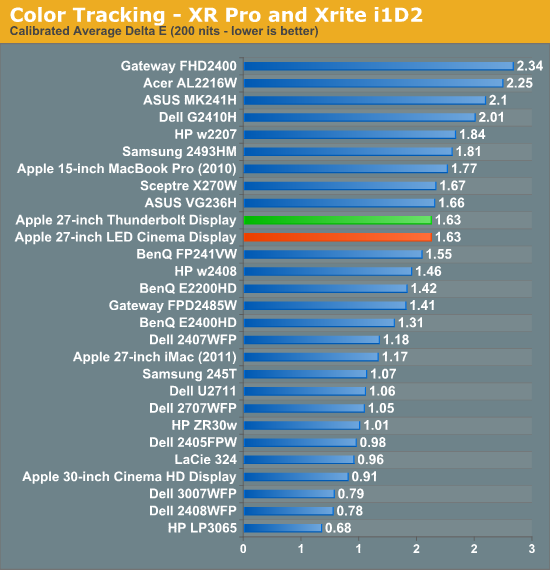 As we mentioned earlier, a sub 2.0 delta E is good enough for professional use. Although not perfect the Thunderbolt Display falls within that range for sure. 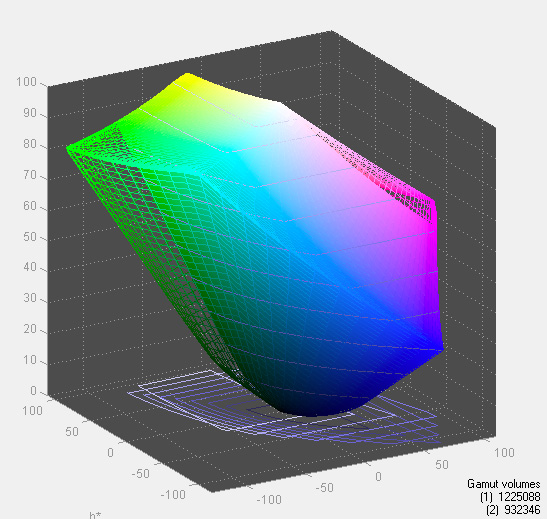 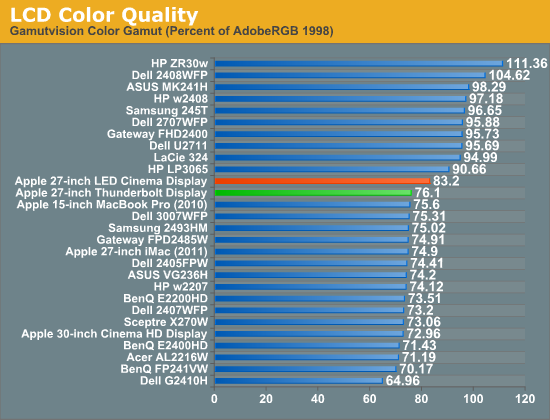 We measured slightly lower color gamut on the Thunderbolt Display than the original LED Cinema Display, however the result was much closer to the 2011 27-inch iMac. I couldn't visibly tell any differences and Apple indicates that color gamut shouldn't have changed, so it's quite possible that the differences here are due to our colorimeter and not the panel.

Now for color consistency, we take our best calibration profile from the very center at 200 nits and test color accuracy at 9 different places around the LCD display in an evenly distributed grid. We’ve shown before that calibration is localized across the display, partly due to the brightness not being uniform, partly due to the discrete nature of the display itself. 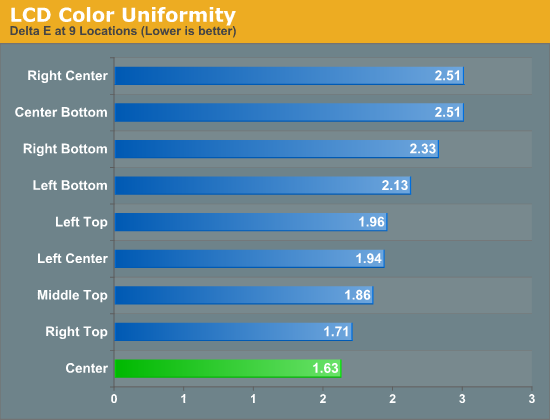 The Thunderbolt Display was fairly uniform across its surface, something we noticed in reviewing the 27-inch LED Cinema Display last year. Uniformity is actually better on this panel than the one we reviewed last year, although in both cases I couldn't really tell any differences.

Peak brightness appears down slightly, but so are the black levels which result in a slightly better contrast ratio. Apple is also calibrating these things at the factory now so white points are now set at around 6300K vs. 7100K on the original 27-inch LED Cinema Display.