We've asked Francois Simond (supercurio), creator of the very popular project-voodoo and voodoo-sound  improvement packages, and Android hacker focused on sound, video, and image, to set the record straight on Samsung Galaxy S 2's sound quality. In addition, Francois will help us test smartphone and mobile-device sound quality and continue being a contributor as it quickly becomes an important industry focus.

Galaxy S II comes with a lot of expectations in the audio department. Samsung’s previous flagship family, Galaxy S, (aka Vibrant, Captivate, Fascinate, Galaxy S 4G, Epic 4G in the US) set the bar high, using a good quality implementation of Wolfson Micro WM8994 codec. Existing custom mods which tuned WM8994 usage have even been able to push the quality higher than most expected, as well as the headphone output levels. 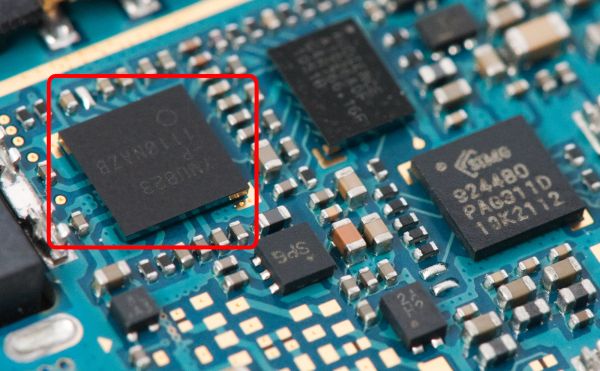 Yamaha YMU823 - Encircled in Red Above

Its datasheet is not public but it’s a chip designed designed to compete with latest Wolfson and TI offerings and probably a custom product designed to follow Samsung requirements.

Unfortunately, it fails at both.

As music player, Galaxy S II performance can be described as:

Yamaha’s MC-1N2 codec has some nice theoretical specs, but the promised sound fidelity turns into a boring rendering affected by several outstanding issues, relegating Samsung flagship far from the audiophile category. Worse: only some of those issues can be remedied by using additional equipment like an attenuator or an active headphone amplifier.

Today most listeners enjoy music with isolating earphones, as they are useful for listening to music or podcasts in loud environments without having to pump the volume up and introduce listening fatigue. Most in-ear gear is highly sensitive. Combined with low impedance and 20dB isolation, hiss and other noise are quickly noticeable.

If you’re using sensitive in-ear headphones, radio GSM / EDGE noise is as audible, indicating a probable hardware design flaw of the codec or the board. The culprit is poor EMI shielding.

Due to its bursty nature, this flaw is hard to expose in measurements and fortunately less audible with medium sensitivity headphones, not at all with low sensitivity ones.

You can solve this issue by using an attenuator or amplifier: maximizing digital Android output level and adjusting the volume to your need with the amp.

With today’s Android audio implementation, all kind of media are sent to the DAC as a 44100 / 16bit / Stereo stream. Despite the usage of a fixed rate, Yamaha’s codec is not able to provide a very clean output.

Galaxy S II DAC output quality is limited by several kind of distortions. So far, no firmware was able to fix those despite early Korean updates describing “audio clarity improvements”.

When playing music, those artifacts are perceived as “lack of clarity”, “reduction of stereo separation”, “loss of detail” and “lifeless sound” (opposite of lively). 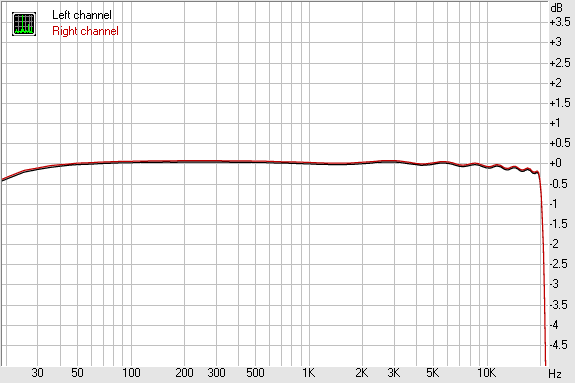 Not the best ever but reasonably flat. The slight oscillation in frequency response starting at 1kHz gives a clue about what we’ll see in the next graphs. 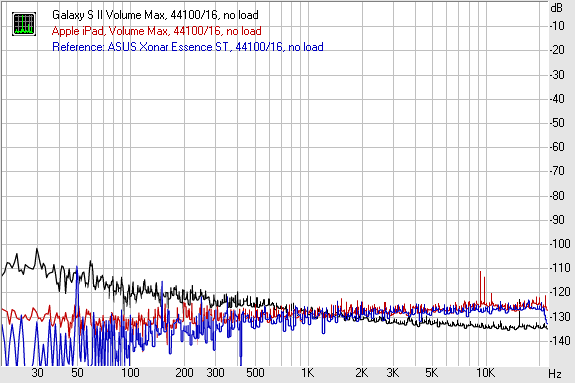 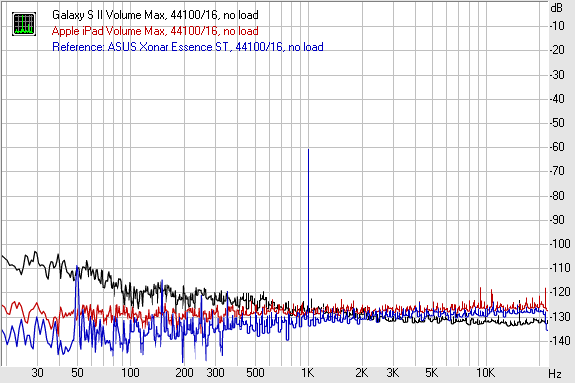 On Noise Levels and Dynamic range graph, I added measurements of Apple iPad and a reference sound card for comparison puposes.

What we see here is good performance. In theory and measured in ideal conditions Galaxy S II has low noise levels and very good dynamic range. However, if noise levels are remarkably low on high frequencies, they increase on lower frequencies which is not something expected nor a good sign as those are more likely to be heard. 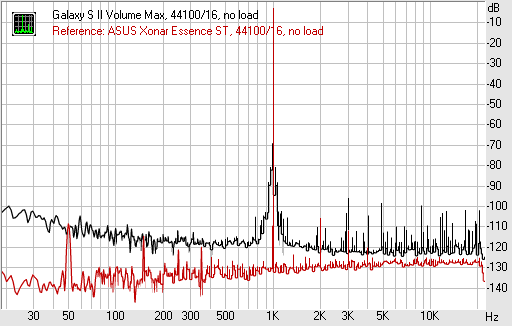 THD is calculated by measuring harmonics generated by the electronic circuits when a signal at 1kHz is played. As you can guess by this graph’s shape, there’s an issue here.

In terms of sound and perception, harmonics add colour to the sound; sometimes pleasing like the kind of distortion tube amps add.

This graph show all kind of distortions introduced by Yamaha’s DAC, ie:

As the noise and other distortions are high, the THD measurement itself becomes kind of irrelevant. Unfortunately the value of  0.0036% is not of the actual performance here.

Other reviews might have use this THD value as base for invalid conclusions. 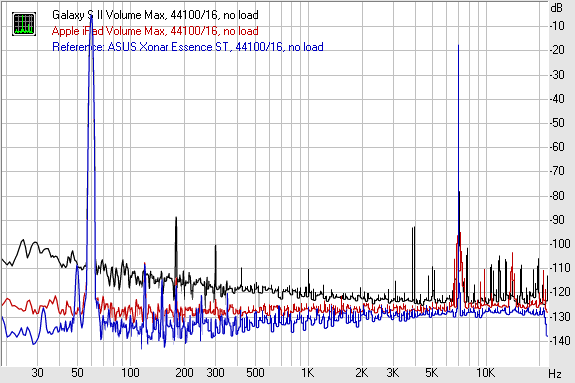 What IMD + Noise means needs an explanation: I believe it’s safe to describe it as “all kind of noise and distortions happening when you play a signal” − at the opposite of the signal itself.

IMD + Noise importance is often underrated, like it was useless as we already have another distortion value (THD). Still, it’s often more representative of the general performance and of the sound quality perceived.

No matter how low is the theoretical noise floor, Yamaha MC-1N2 DAC has issue when playing signals. As you can guess by this latest comparison graph and the number of spikes indicating some sound that shouldn't be there. iPad DAC is not perfect either, still it provides a much cleaner sound. The reference DAC shows how the graph should be.

-63.7dB level for “noise and distortions” is far from the level of performance expected from a last-gen audio IC. 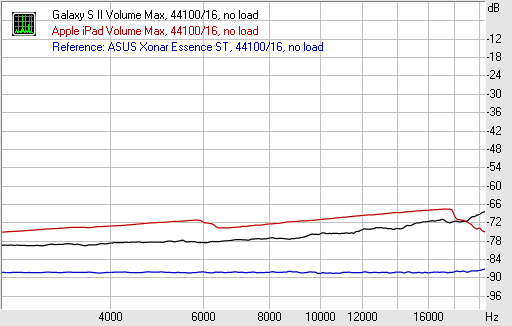 This test consist of a single sine played going from a very low frequency to 22kHz.

Actually, when playing something as simple as a single frequency at one time result is not so bad; music is rarely made of simples sines. 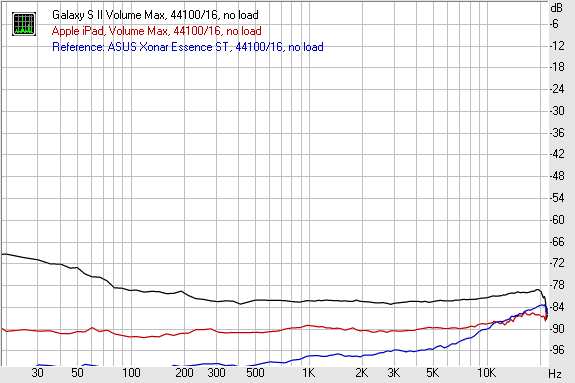 My guess is that Yamaha’s codec internal behavior is perturbed by a jittery clock source (being Exynos AP PLL clock). If not? it  would mean the DAC design is flawed. The first hypothesis is more likely: implementation on small very low power board is always tricky.

You cannot avoid the distortions described here by using an external amplifier or any other equipment.

A spectrogram lets you “see” the sound, why I’ll use this colorful presentation to show you some examples of Galaxy S II audio output. 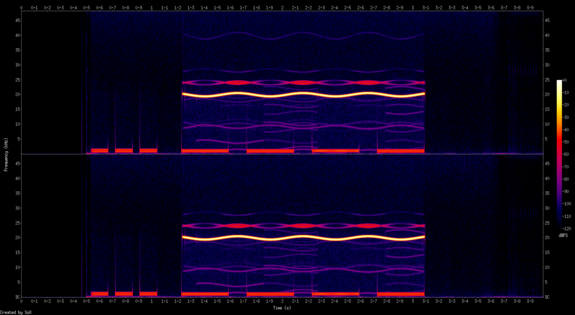 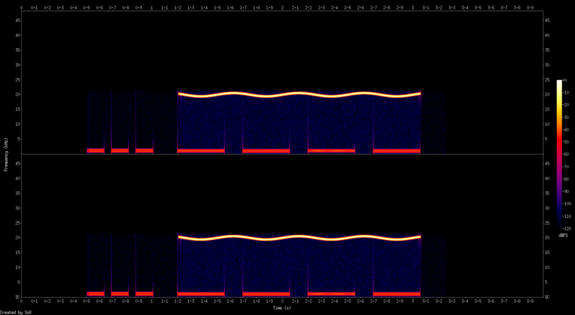 udial is a very interesting sample circulating in forums for more than ten years. I didn’t manage to find its author to thank him for his clever idea. udial is a very efficient stress test that enables an easy test for clipping, re-sampling and some types of jitter.

Galaxy S II performance is not terrible but not good either. Artifacts are audible and can be seen in this spectrogram. I must admit some are a mystery to me like the “delayed” ones. 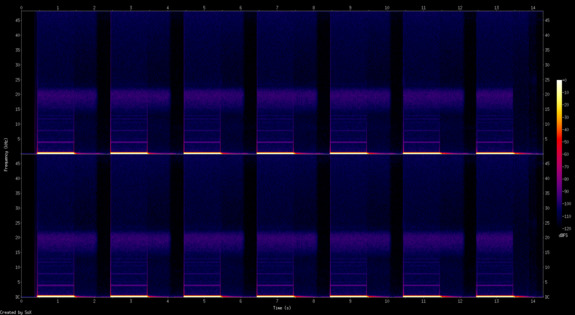 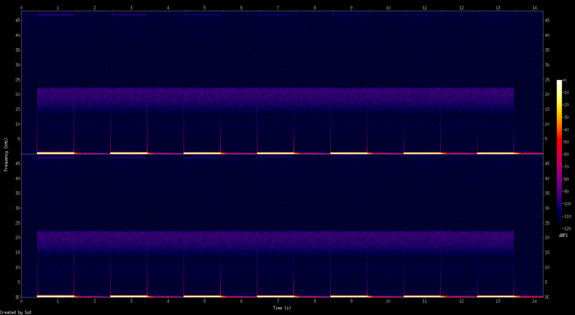 Once again Galaxy S II exhibits artifacts. If you download the associated FLAC record phone’s output you may be able to hear those appearing as lines on the spectrograph (more noticeable on last 2 notes).

DNG analyzes the signal played and quickly shut down parts of the codec. It helps reducing the perceived hiss and reducing power consumption a little.

Eventually (after about 2 seconds of nothing played) the entire audio hardware is shut down by Android OS but the best part is that Digital Noise Gate feature is extremely efficient as anti-pop.

MC-1N2 performance is class leading on this regard.

This part may become a dedicated article but here are some facts already:

Question is: Is it loud enough? When driving HD 650, it reaches comfortable listening levels but won’t reach “loud” levels. For RE0 and most consumer headphones, yes it's loud enough.

Remember isolating headphones are recommended when in loud environments rather than pumping volume too high and damage your hearing.

To me the quality of the amp itself is average-to-okay. Its hard to speak much about it as it’s most of the time amplifying the signal sent by a flawed DAC.

As distortion amount rises at highest levels, its probably MC-1N2 amp power stage implementation on Galaxy S II board does not have much headroom. More measurements may be welcome here.

One characteristic of Galaxy S II's headphone driver is its relatively high impedance: higher than competitor chips. Power efficiency diminishes when the output impedance grow: energy lost in heat. This is why Yamaha’s choice of design is surprising.

A notable side effect of this characteristic is that the headphone output becomes less loud with low impedance cans.

Output impedance doesn’t have much effect on 300 Ω gear, but on common 16 Ω earphones:

As a result, Galaxy S II might play well with some equipment but also reveal the worst side of other with harsh and aggressive rendering.

This output impedance is why opinions about Galaxy S II audio are so contradictory in forums: experience can vastly differ depending on your choice of headphones.

There are many issues or flaws listed and demonstrated in this article. However it doesn’t mean Galaxy S II is unable to play music.

Compared to the average Android phone it probably sounds better already. Explanations mean to show where there’s headroom for improvement on the next devices.

We're more than willing to discuss audio testing methodology with manufacturers to help improve the next generation of phones.

It still supports FLAC natively, which is a nifty feature for audiophiles and its simple interface and efficient will satisfy most users.

This pre-installed music player still lacks a much desired gapless feature, which means listening to mixes, concerts records or classical music won’t be as pleasing as it should.

You’ll find an 8 band graphic EQ in settings as well as EQ presets and additional sound effects adding reverberation, spatialization or stereo enhancements. Some effects are interesting if you’re not looking especially for an hi-fi accurate sound reproduction. However I would suggest to stay away of the EQ presets as much as possible:

If you really need to use this EQ, one workaround in using the graphic EQ manually instead: only attenuate but never increase some frequencies, those you find too present. This is in general the best way to use an EQ and find a more balanced sound response to correct headphone or speaker response.

This tip will avoid triggering the DRC. 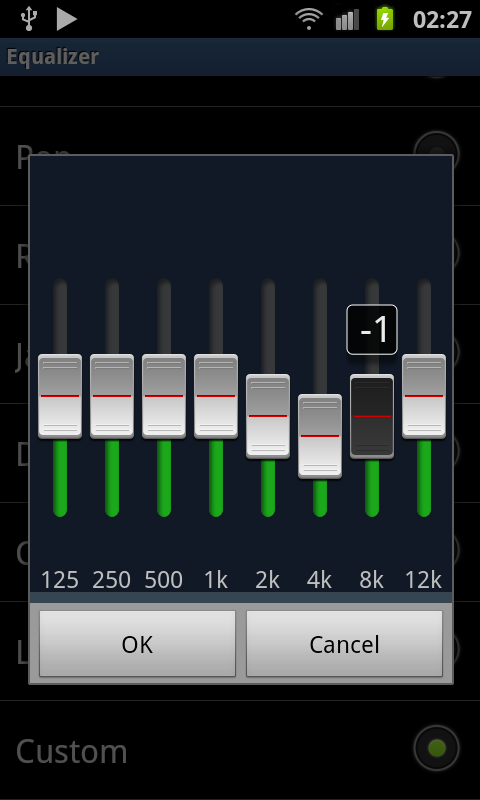 As usual with Android OS, you’ll be able set an alternative music player as the default one without any restriction, adding gapless , more compression codecs  support or a different UI.