I believe there's a very specific niche that is interested in something like the RevoDrive 3. A customer that needs the performance and is too resource limited to go after the more expensive solutions on the market. I believe it's a lot like what we did in the early days of AnandTech. A decade ago we couldn't get or afford powerful server hardware, but we needed the performance. Our solution was to build a bunch of desktops (using hardware that we did have available to us) and deploy them as our servers. The solution was incredibly fast and cost effective, exactly what we needed at the time. We of course later ran into reliability issues down the road when all of our desktop motherboards died at the same time (apparently we had a bad batch), but when they worked the systems served us well.

The RevoDrive 3 reminds me a lot of something we would've deployed back then: something that can deliver the performance but whose track record isn't proven. OCZ insists that the RevoDrive 3 isn't targeted at servers, although it fully expects users to deploy it in machines running server OSes. 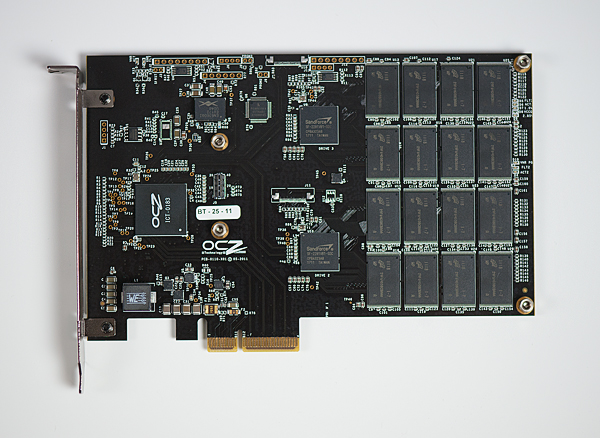 The RevoDrive 3 X2's performance shouldn't be surprising. In fact, you should be able to get similar performance out of a 4-drive RAID-0 array of Vertex 3s. Unfortunately you wouldn't be able to do so on a 6-series Intel motherboard as you're limited to two 6Gbps SATA ports. You'd either need to invest in a 4-port 6Gbps SATA RAID card like this or look at AMD's 8/9-series chipset, which does make the RevoDrive 3 X2 a little more attractive. Ultimately this has been one of my biggest issues with these multi-controller PCIe SSDs, they rarely offer a tangible benefit over a DIY RAID setup.

For the majority of users the RevoDrive 3 X2 is simply overkill. I even demonstrated in some of our IO bound tests that you're bottlenecked by the workload before you're limited by the hardware. That being said, if you have the right workload - I've already shown that you can push nearly 1.5GB/s of data through the card and hit random IOPS numbers of over 180K (~756MB/s in our QD32 test). Even if you have the workload however I still have two major concerns: TRIM support and reliability.

While I'm glad you can finally secure erase the drive under Windows, missing TRIM is a tangible downside in my opinion. The only salvation is the fact that if you're running with mostly compressible data, SandForce's controllers tend to be very resilient and you probably won't miss TRIM. If your workload is predominantly incompressible (e.g. highly compressed videos, images or data of a highly random makeup) then perhaps something SandForce based isn't the best option for you to begin with.

The reliability issue is what will likely keep the RevoDrive 3 out of mission critical deployments. A single controller failure will kill your entire array, not to mention the recent unease about using anything SandForce SF-2281 based. OCZ tells me it hasn't seen a single BSOD issue on the RevoDrive 3 X2 thus far (it's currently running version 2.06 of the OCZ/SF firmware) however it'll be updated to the latest firmware before shipping in late July just in case.

As with anything else in the SSD space, I'd suggest waiting to see how the RevoDrive 3 X2 works deployed in an environment similar to your own before pulling the trigger.