As GPUs have increased in complexity, the refresh cycle has continued to lengthen. 6 month cycles have largely given way to 1 year cycles, and even then it can be 2+ years between architecture refreshes. This is not only a product of the rate of hardware development, but a product of the need to give developers time to breathe and to absorb information about new architectures.

The primary purpose of the AMD Fusion Developer Summit and the announcement of the AMD Graphics Core Next is to give developers even more time to breathe by extending the refresh window backwards as well as forwards. It can take months to years to deliver a program, so the sooner an architecture is introduced the sooner a few brave developers can begin working on programs utilizing it; the alternative is that it may take years after the launch of a new architecture before programs come along that can fully exploit the new architecture. One only needs to take a look at the gaming market to see how that plays out.

Because of this need to inform developers of the hardware well in advance, while we’ve had a chance to see the fundamentals of GCN products using it are still some time off. At no point has AMD specified when a GPU will appear using GCN will appear, so it’s very much a guessing game. What we know for a fact is that Trinity – the 2012 Bulldozer APU – will not use GCN, it will be based on Cayman’s VLIW4 architecture. Because Trinity will be VLIW4, it’s likely-to-certain that AMD will have midrange and low-end video cards using VLIW4 because of the importance they place on being able to Crossfire with the APU. Does this mean AMD will do another split launch, with high-end parts using one architecture while everything else is a generation behind? It’s possible, but we wouldn’t make at bets at this point in time. Certainly it looks like it will be 2013 before GCN has a chance to become a top-to-bottom architecture, so the question is what the top discrete GPU will be for AMD by the start of 2012.

Moving on, it’s interesting that GCN effectively affirms most of NVIDIA’s architectural changes with Fermi. GCN is all about creating a GPU good for graphics and good for computing purposes; Unified addressing, C++ capabilities, ECC, etc were all features NVIDIA introduced with Fermi more than a year ago to bring about their own compute architecture. I don’t believe there’s ever been a question whether NVIDIA was “right”, but the question has been whether it’s time to devote so much engineering effort and die space on technologies that benefit compute as opposed to putting in more graphics units. With NVIDIA and now AMD doing compute-optimized GPUs, clearly the time is quickly approaching if it’s not already here. 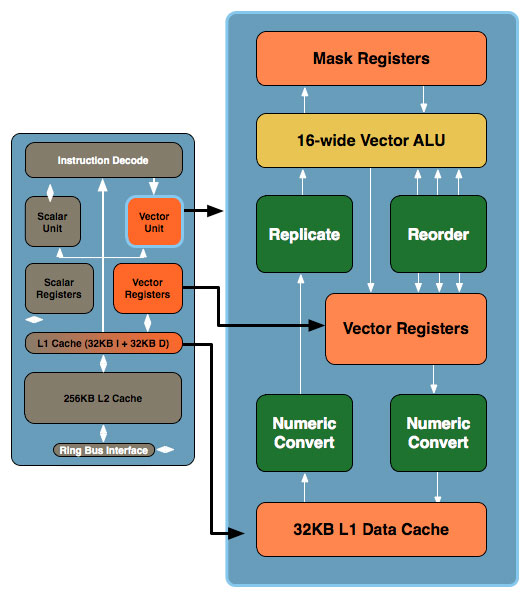 Larrabee As It Was: Scalar + 16-Wide Vector

I can’t help but to also make a comparison to Intel’s aborted Larrabee Prime architecture here. There are some very interesting similarities between Larrabee and GCN, primarily in the dual vector/scalar design and in the use of a 16-wide vector ALU. Processing 16 elements at once is an incredibly common occurrence in GPUs – it even shows up in Fermi which processes half a warp (16 threads) a clock. There are still a million differences between all of these architectures, but there’s definitely a degree of convergence occurring. Previously NVIDIA and AMD converged around VLIW in the days of the graphical GPU, and now we’re converging at a new point for the compute GPU.

Finally, while we’ve talked about the GCN architecture in great detail we haven’t talked about how to program it. Of course there’s OpenCL, but with GCN there’s going to be so much more. Next week we will be taking a look at AMD’s Fusion System Architecture, a high-level abstraction layer that will make GPU programming even more CPU-like, an advancement necessary to bring forth the kind of heterogeneous computing AMD is shooting for. We will also be taking a look at Microsoft’s C++ Accelerated Massive Parallelism (AMP), a C++ extension to bridge the gap between current and future architectures by allowing developers to program for GPUs in C++ even if the GPU doesn’t fully support the C++ feature set.

It’s clear that 2011 is shaping up to be a big year for GPUs, and we’re not even half-way through. So stay tuned, there’s much more to come.