So how does this all loop back to cellular networks? Well the modulation schemes we’ve described here are what are at play right now in cellular networks. In the beginning of WCDMA, in 3GPP Release 99, the only modulation scheme was QPSK. Later in the HSDPA release-5 standard, 16QAM was added, and finally in release-7, 64QAM was added. That’s all only talking about the downlink from the tower to the handset. That said, the same gradual addition of higher and higher order modulation has taken place on the uplink as well, with the new addition of 16QAM in release-7 to supplement existing QPSK from release-6. User equipment continually reports its own downlink quality measurement to the tower in uplink signaling, and the tower makes its own decision about what modulation scheme to use depending on link quality. When quality is very good, 64QAM gets used, else 16QAM, else QPSK.

The addition of 64QAM thus makes it possible to achieve much higher data rates, but only close to the cell center where there’s minimal interference or noise, or good Signal to Noise Ratio (SNR). There’s been some drive testing done which shows that in real world environments, 64QAM only gets used around 10% of the time – it isn’t something used a lot of the time by any stretch of the imagination.

So what’s the confusion here relating to the Veer? It stems from an incorrect assumption about what is and isn’t mandatory in ‘HSPA+’ 3GPP release-7. It is a gross oversimplification of the standard to call HSPA+ merely the previous release with 64QAM added in. The reality is that there are many more things included in release-7, including MIMO user equipment categories that lack 64QAM, numerous layer two enhancements, improved signaling which increases data rate, reduces signaling load, and speeds up state transitions, and the already mentioned changes to upstream modulation (inclusion of 16QAM). Even beyond release-7 is release-8, which adds dual carrier HSDPA, essentially enabling the modem to use two 5 MHz WCDMA downstream channels at the same time, doubling performance. That comes in release-8, and there are categories with all the bells and whistles - MIMO, 64QAM, and/or dual-carrier. I've put together a table with all of the user equipment categories for releases 5 through 7.

Implement any one of the features from release-7 in your modem, and it is considered HSPA+. With respect to the Veer, the features from release-7 HSPA+ that are implemented are reduced cellular signaling for faster call setup, state changes, and less latency. The Veer is based around Qualcomm’s MSM7230 and uses its integrated cellular baseband, which supports HSDPA 14.4 and HSUPA 5.76, which means it supports up to 16QAM on the downlink, and QPSK on the uplink, but still is an ‘HSPA+’ modem due to the improved signaling. Again, it’s an incorrect and gross oversimplification to draw the line based on the lack of 64QAM on the downlink. It’s similarly puzzling why if we’re drawing lines in the sand based on modulation support that uplink modulation wasn’t considered. Education is the only way to mitigate such confusion.

That said there are other HSPA+ modems that do include 64QAM support on the downlink, the earliest of which that I’m aware of is Samsung Galaxy S 4G. That particular phone had an ST Ericsson THOR 5730 baseband with HSDPA 21.1 support. That same modem is likely in the Galaxy S 2 (which we haven’t played with in detail yet) and the Samsung Infuse 4G I have sitting on my desk for an upcoming review. That particular baseband is HSDPA 21.1, HSUPA 5.76, meaning it supports up to 64QAM on the downlink, but again only QPSK on the uplink, yet there aren’t similar confusing rumors about it not being HSPA+.

I’m not even touching on whether HSPA+ should be considered “4G” or not, as that’s an entirely different argument, this is purely about whether or not certain UE categories are part of release 7, and thus HSPA+. Long story short, the HP Veer 4G is definitely an HSPA+ device.

I did the usual due diligence and ran just above 100 speedtests on the HP Veer 4G. One interesting thing I did notice is that using the provided SIM, the Veer’s cellular connectivity indicator stayed on “3G.” The times that I used it with my own SIM for testing (we try to use each device as best we can as our own during testing periods), I saw “H+” which AT&T is showing on a number of devices. I’m definitely intrigued by why there would be any discrepancy since there shouldn’t be any difference, yet I saw this behavior all of my time with the Veer. Speeds with either inserted were virtually the same. You can see our breakdown the usual histogram view we’ve been presenting since our LTE investigation. Speeds on HSPA+ are definitely faster than EVDO, but still nowhere near LTE. I saw a maximum throughput result of just over 8 Mbps down, which I think to date is the fastest I’ve seen AT&T in my area. Throughput testing on the Veer was performed by running speed tests over flash to speedtest.net and then exporting results at the end. 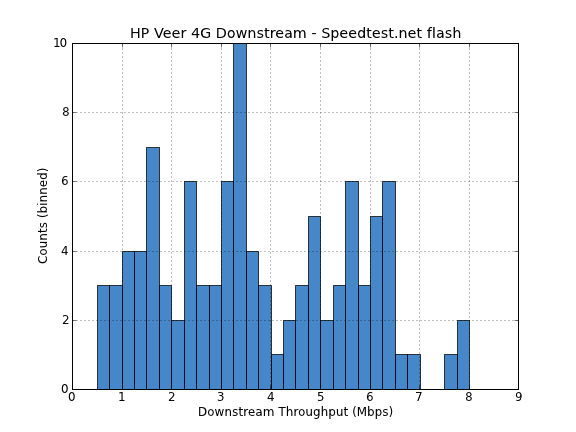 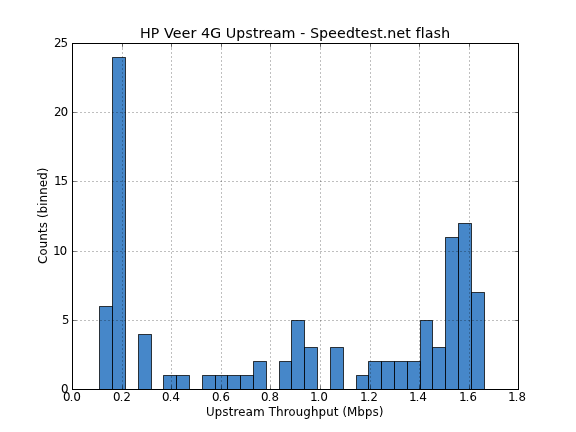 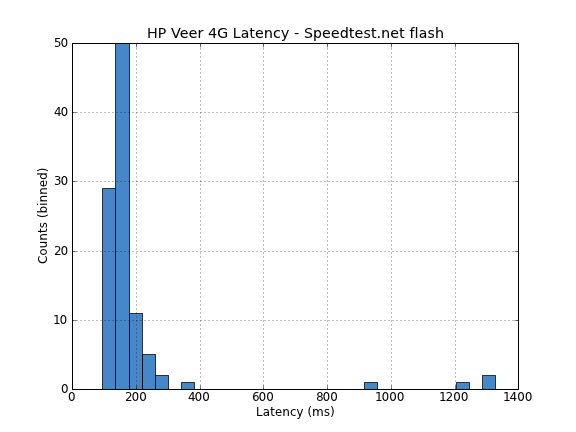 I'm starting to see this very bimodal distribution of upstream speeds (clustered around 384 kbps for just WCDMA upload when no HSUPA is working, and around 1.5 Mbps when HSUPA is working). I'm beginning to think AT&T is doing something interesting here, but that's for another story.

We’ve been measuring signal attenuation with devices for some time now. Unfortunately WebOS 2.0 seems to do away with MiniDM, the 3G radio engineering application which was what I used on the Palm Pre Plus and other WCDMA WebOS devices. 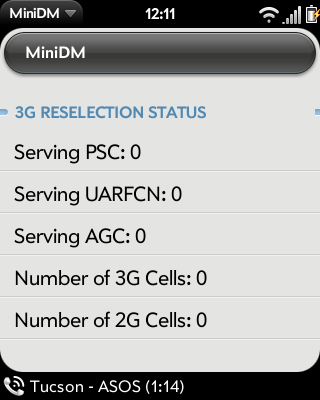 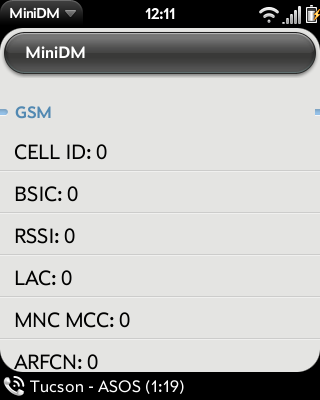 Firing that up now shows null or 0 values in all fields, likely because it hasn’t been updated to measure anything from Qualcomm’s modem in the MSM7230. Unfortunately I am not aware of any other way to get RSSI from the device. That said, I didn’t notice the Veer being any more prone to deathgrip than any other phone. The only other missing piece that I still have a gripe with in WebOS is the absence of any 3G/WCDMA or 2G/GSM/EDGE toggles. There's absolutely no control over which the device is going to prefer, which was a problem on the GSM Palm Pres as well. More control is always in the interest of users. 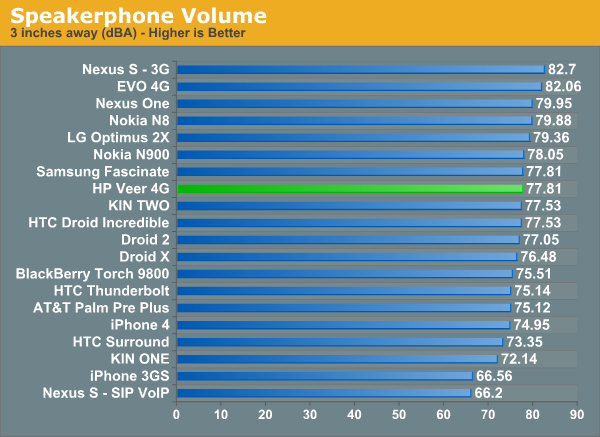 I was a bit worried about speakerphone volume on the Veer due to its miniscule size. Incredibly, audio loudness on speakerphone is middle of the pack and totally adequate. Handset audio quality is also very good from what I could tell.