A cache's performance is determined by how well the caching algorithm matches the workload, how well the cache size accommodates the workload and how quickly you can access the cache. So far we've demonstrated that Corsair's F40 can perform anywhere from noticeably worse to a bit faster than Intel's SSD 311 as a cache. I wanted to see if I could demonstrate the capacity advantage alone offered by the F40. To illustrate this I performed 11 tasks in a row composed of application launches, game launches and level loads. After running through all 11 tasks once, I rebooted and ran through them again. I then rebooted again and ran through the 11 tasks one more time, for a total of two cached runs per SSD cache. In theory the larger cache should be able to maintain application launch performance between runs: 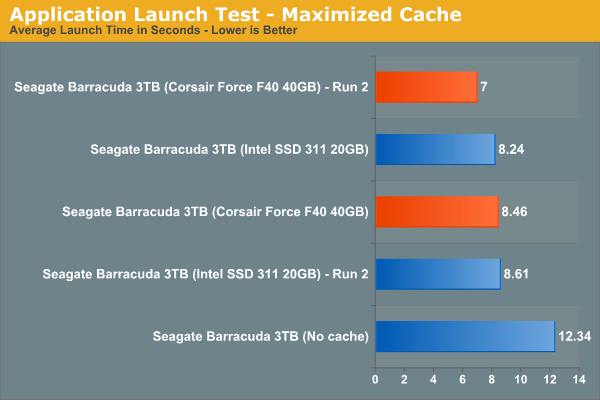 On the first run both the Corsair F40 and Intel SSD 311 manage to perform very similarly. On the second run however, many of the applications load slower on the SSD 311 as some data has apparently been evicted from the cache. The 40GB Corsair F40 doesn't suffer the same fate as it has much more data for storage and as a result the second run through shows continued performance improvement.