If you had asked me last year I would've told you that Apple clearly values GPU performance more than CPU performance—and I wouldn't be far off the mark. Apple went to great lengths to use the best of the entry level GPUs and paid no mind to the fact that the 13-inch MacBook Pro, Mac mini and MacBook Air all used much older Core 2 Duo CPUs while the competition was busy shipping Core i3/5/7s.

This year is the year of the CPU however. The entire MacBook Pro lineup gets Sandy Bridge CPUs and as a result they all get Intel's new HD Graphics 3000. Here's a die shot of Sandy Bridge:

Note that the GPU core is integrated on-die. There are actually two versions of Intel's HD Graphics available on Sandy Bridge, but all current mobile versions of SNB come with the 3000 model. What does the 3000 offer you? Twelve scalar execution units (EUs) running at a base clock speed of 650MHz. The GPU can also turbo up depending on available TDP. The max frequency is somewhere between 1.2—1.3GHz depending on the processor SKU.

Being basically desktop replacements, the 15-inch and 17-inch MacBook Pros also include a discrete GPU. This round they both use AMD hardware and the options are below:

The entry level 15 uses a Radeon HD 6490M while the upgraded 15 and the 17 both use a Radeon HD 6750M. The difference between the two GPUs amounts to compute horsepower, memory bandwidth and available frame buffer. With only a 256MB frame buffer the 6490M is insufficient for high performance at larger resolutions (courtesy of an external display). The 6750M is paired with 1GB of GDDR5 and thus has no problems smoothly driving a 27-inch 2560 x 1440 panel. The new GPUs now only use a x8 connection to the SNB CPU compared to the x16 from last year's models. Remember Sandy Bridge has a x16 PCIe controller on-die. The controller can be split into two x8s or 1 x8 and 2 x4. In this case one of the x4 ports is used for Thunderbolt, leaving 4 unused lanes and a x8 for the GPU. I don't expect this move will have a noticeable impact on GPU performance.

The 13-inch MacBook Pro has absolutely no GPU options, all you get is the on-die Intel HD Graphics 3000. Based on what we saw in our original mobile Sandy Bridge review this should mean that GPU performance between the two stays the same. Intel's HD Graphics 3000 is about the performance of a GeForce 320M, the latter is what was used in last year's 13-inch MBP. 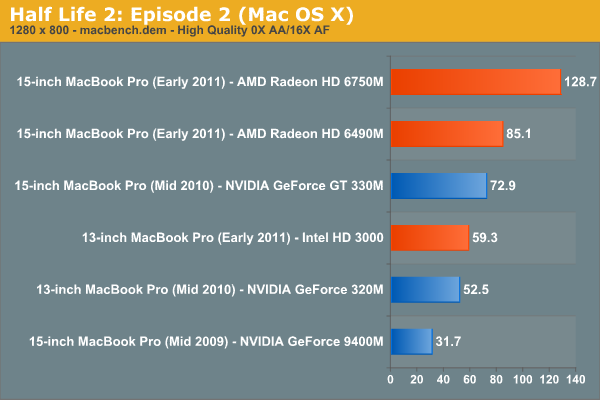 For Starcraft II performance we brought over our two benchmarks from our PC CPU and GPU reviews. We don't have FRAPS availalble under OS X so we resort to measuring lowest instantaneous frame rate at a couple of points.

The two tests focus on different aspects of SC2 gameplay. The GPU test looks at general unit management performance, which tends to be less CPU bound and more GPU bound. The CPU test looks at performance during a very large battle which, as you might guess, is largely influenced by CPU performance. 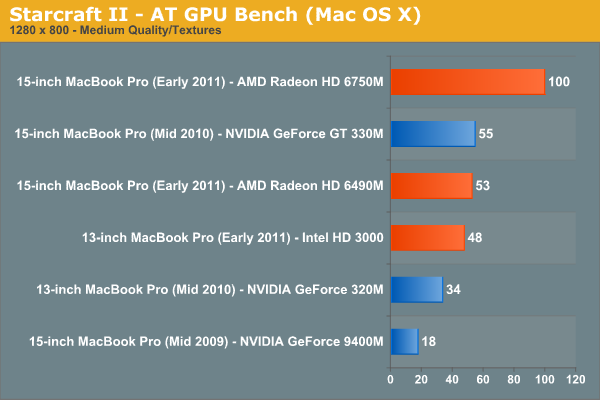 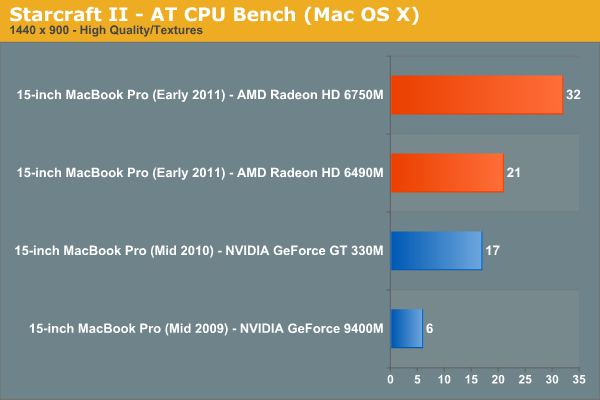 Under OS X, the new HD Graphics 3000 GPU is actually about the same performance or even faster than the 2010 13-inch's GeForce 320M. Remember that Apple does a lot of its own driver writing under OS X and the SNB GPU received some TLC from Apple in the form of very well optimized drivers. 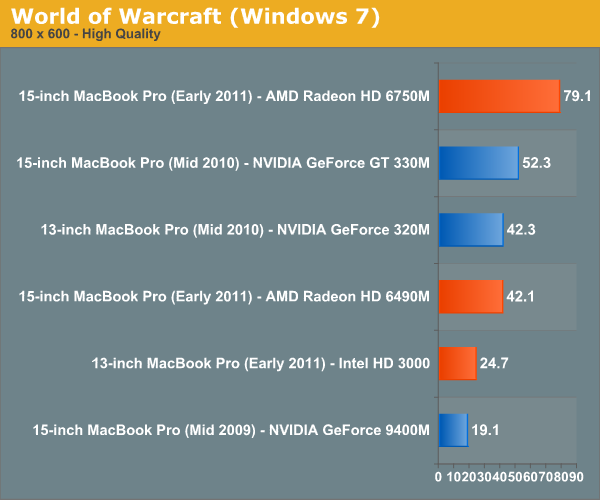 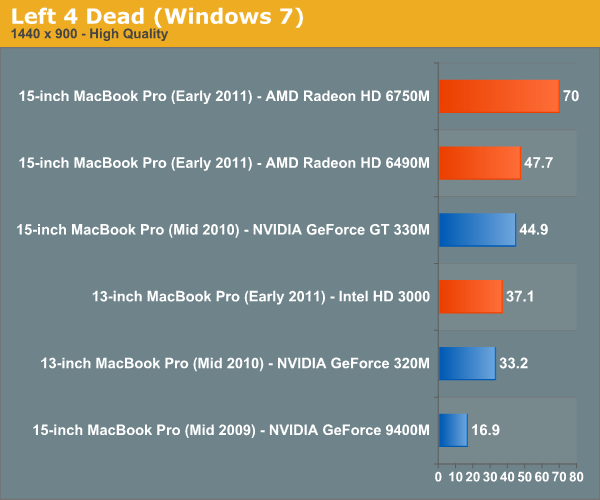 Under Windows running WoW the situation is quite different and I'm not entirely sure why. Either Apple is very aggressive with driver optimizations under OS X or there's some other funniness happening under Windows (more on this later).

I did notice some bouts of instability with the 13-inch MacBook Pro as well as minor graphical corruption on the screen. Early on whenever I'd boot the system up I'd get a copy of the mouse cursor in the upper left of the screen.

Next up is the 15-inch MBP gaming performance comparison.

For 15-inch users the Radeon HD 6490M is pretty much the same speed as last year's GeForce GT 330M (if not marginally faster). The Radeon HD 6750M however is a lot faster. In fact, the performance improvement and increase in frame buffer you get with the 6750M is well worth the upgrade. If you're buying a 15-inch MacBook Pro and plan on gaming or using a high-res external display, get the 6750M. 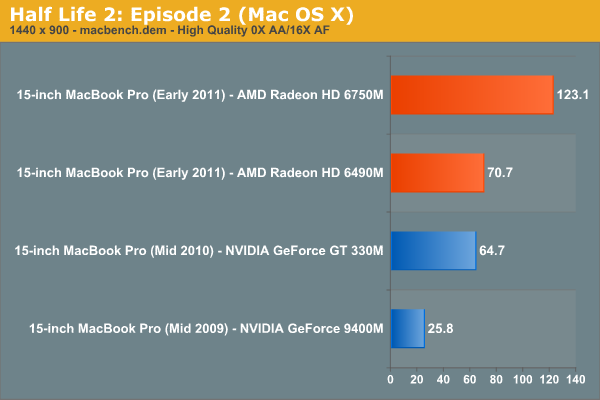 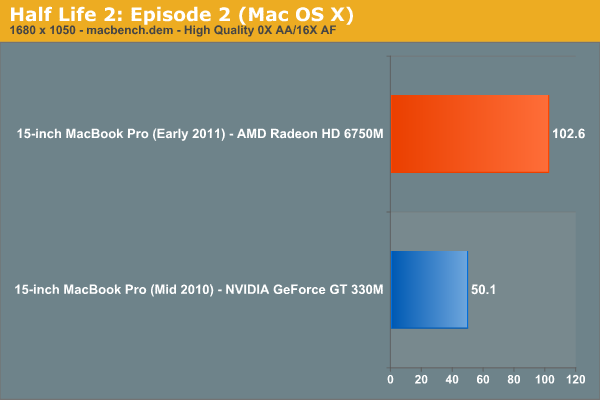 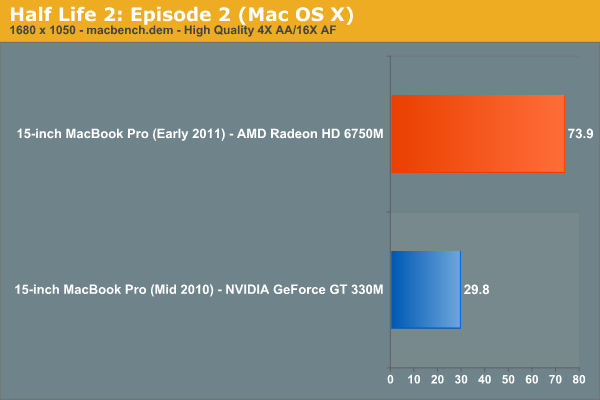 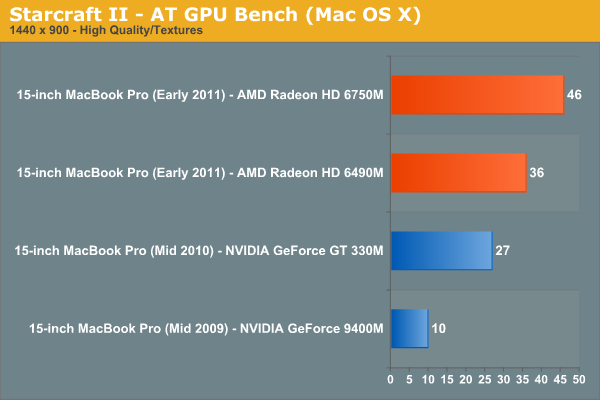 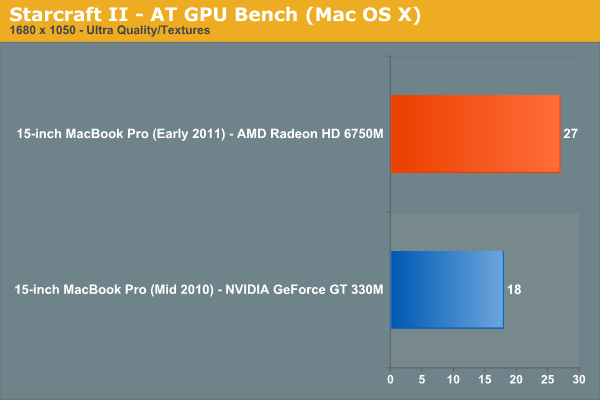 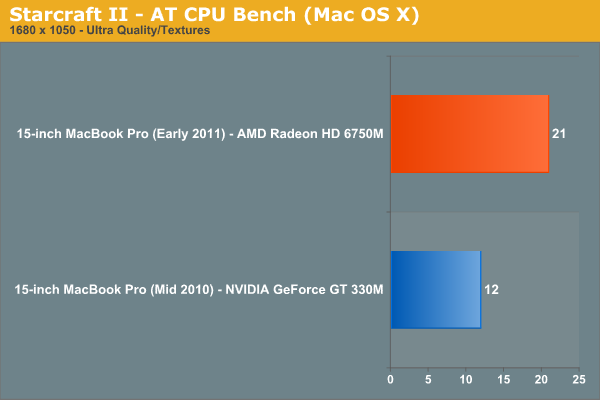