With a new baseband comes new battery life. We ran our usual suite of battery life tests on the Verizon iPhone 4. I was running the last test - WiFi battery life test - when it was time to hop on the plane for MWC. That test hopefully won't change too much, as it's the same WiFi/Bluetooth stack as the previous iPhone 4. As soon as we're back, it'll get tested and the graph will appear. One of the other things we've been working on is a WiFi hotspot battery life test. I've been gathering numbers from every phone so far with official support for WiFi tethering, the iPhone 4 on Verizon will be put to the test the same way. 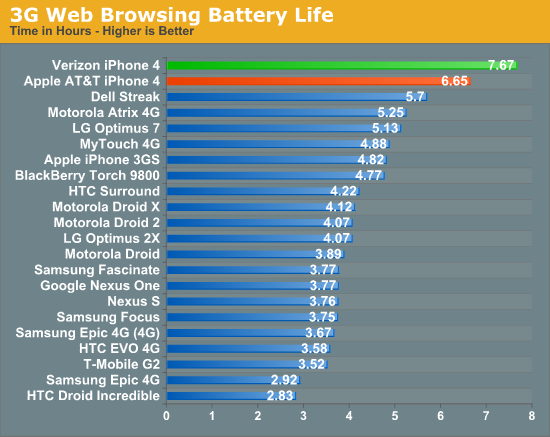 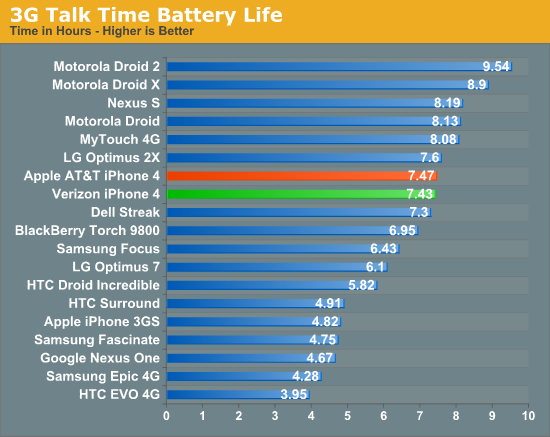 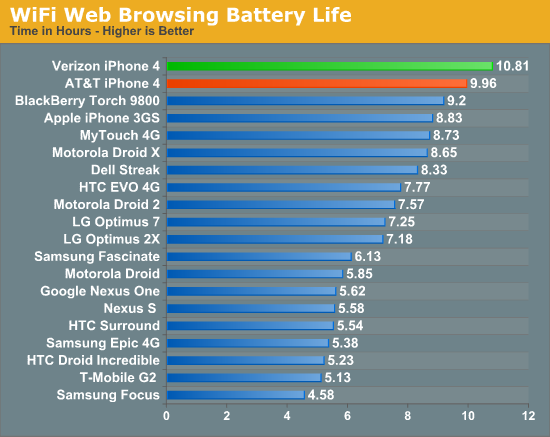 Call time is shockingly close between the two iPhone 4s. The Verizon iPhone 4 also soundly beats the AT&T iPhone 4 in the 3G web browsing and WiFi battery life department, shooting it to the top of our chart. Qualcomm's MDM6600 appears to be comparable if not better than the Infineon in the power department, though it's hard to be sure without having HSPA working for a direct comparison.

So the long-awaited Verizon iPhone 4 is finally here. It's functionally the same as the GSM/UMTS iPhone 4 on AT&T, except significantly less prone to unintended signal attenuation from being held thanks to receive diversity through two cellular antennas. Battery life is the same or better than the AT&T iPhone 4, GPS is slightly more precise, Verizon lets you turn your phone into a WiFi hotspot if you pay the fare, and SMS concatenation even works on Verizon's network. There's really nothing to complain about at all or point out as being inordinate about the CDMA iPhone - it's simply an iPhone 4 on Verizon's network. 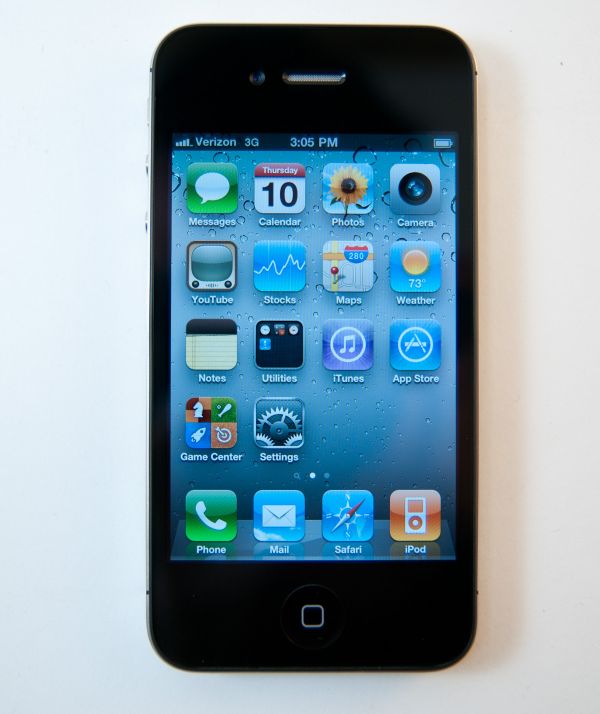 At the same time, so many more questions linger. Where is the elusive White iPhone 4? What will iPhone 5 bring when it arrives presumably during the normal summer refresh cadence? Is the MDM6600 the baseband Apple will go with for the next device as well, perhaps this next time including the power amps necessary for dual-mode operation? It's impossible to say for sure what will happen, and we rarely dabble in such murky, speculative waters. 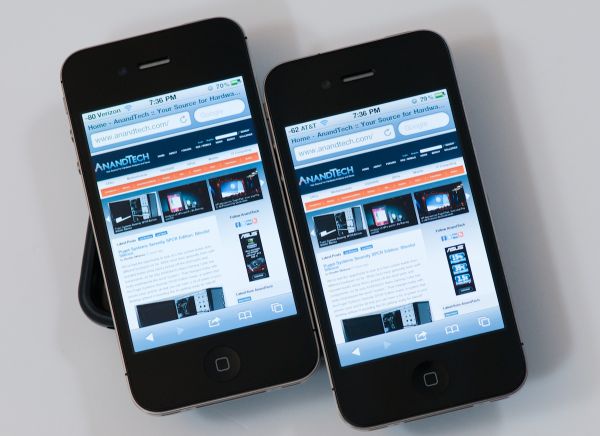 I have no doubt that tomes have been written about the differences between AT&T and Verizon already. It's a debate that has raged on like some sort of cellular analog of the 100-year-war, with each camp ideologically entrenched and beyond the point of reason. Ultimately, picking which is better is a matter of making tradeoffs. There's no simple way to answer which is the "better" carrier, as the figures of merit change from person to person. If voice calls are what's absolutely most important to you, get the Verizon iPhone. If much faster 3G data is what's most important to you, get the AT&T iPhone. If having more ubiquitous data coverage (at the expense of speed) sounds reasonable, get the Verizon iPhone. If the simultaneous voice/text and data issue is something you feel strongly about, get the AT&T version. Above all else, find out who has better coverage in the areas that actually matter to you - the workplace, at home, and along daily commute. Until carriers report coverage with actual numbers and following some standard, take coverage maps with a hearty dose of skepticism. The only way to know for certain is to either borrow a friend or his phone, or make liberal use of return policies.

Ultimately, the larger net effect of the Verizon iPhone 4 will be to increase pressure on Android. Verizon is the carrier that Google's platform has arguably enjoyed the most success with. Having an iPhone doing direct battle on the same carrier isn't so much optional for Apple anymore as it is necessity. Even if you disagree with the philosophical choices that iOS has made, you have to hand it to Apple for catalyzing changes that will force carrier competition based on the merits of their networks.