General Performance: In Between Atom and Athlon II

Atom may be efficient and fast enough to run a smartphone OS, but it absolutely chugs on Windows 7. The seat of the pants feel of an AMD E-350 is noticeably better. Single threaded performance, as you’ll soon see, is easily twice that of a similarly clocked Atom. Bobcat is still a dual-issue dual-core machine so high IPC or highly threaded workloads will show little difference between it and Atom. Thankfully, for most entry level netbook/nettop workloads Bobcat’s architecture should be sufficient. Before we get to the more CPU intensive tests I wanted to run through some reader requests for performance characterization.

I’ll start out with PCMark Vantage. There’s very little that separates PCMark from SYSMark in terms of how realistic the workload is. Neither suite is particularly representative of what an average user does today. What these suites are good at is being very long, and stressing enough aspects of a platform to give you a general idea of performance. SYSMark tends to focus on the more heavy user/content creation side of things (optimized for no more than 2 cores), while PCMark Vantage is much lighter test.

Looking at SYSMark you’d see no performance difference between the E-350 and Atom. The reason is simple. SYSMark was designed to be a modern day CPU benchmark. Most of the workloads exhibit high IPC and thus Bobcat’s front end acts as a bottleneck.

While SYSMark can be useful in estimating how a processor might handle particular heavy workload, it’s not useful in characterizing the sort of light workloads that you’d see a netbook or nettop user creating. PCMark Vantage is a collection of far simpler tasks. Again not specifically what you’d do today, but lighter nevertheless.

I compared four systems using PCMark Vantage, all with the same memory and I/O configuration. I dusted off an Atom 330 + ION motherboard from Zotac, an Atom D510, the MSI E-350 board and an Athlon II X2 255 on an 890GX motherboard. I picked the Athlon II simply because it’s a very affordable (~$65) modern day dual-core CPU. The Athlon II will help put the E-350’s performance compared to modern day x86 cores in perspective. 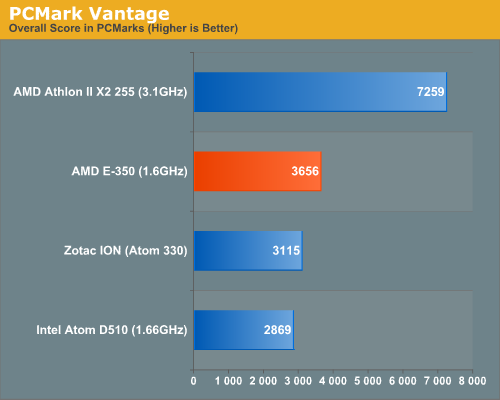 The E-350 holds a clear advantage over the Atom D510. The overall suite runs 27% faster on the E-350 than the D510, and even 17% faster than ION (the overall suite includes some GPU tests where ION makes up for Atom). The advantages vary from 10 - 80% in most cases. If you look at tests where the GPU is involved, you have to start counting how many times Brazos is faster than Intel’s current Atom platform.

I have to put the E-350’s dominance in perspective however. An Athlon II X2 255 still delivers nearly 2x the performance of the E-350 in PCMark Vantage. Just as the Atom to E-350 jump is noticeable, so is the jump from an E-350 to an Athlon II.

A performance advantage in PCMark is often difficult to visualize so let’s move on to some more application specific tests. Next up are two web browser benchmarks we typically use in our smartphone reviews: BrowserMark and SunSpider.

BrowserMark is a general purpose browser test. Rather than loading full web pages it tests rendering speed for commonly used components of web pages and presents one gigantic score at the end to tell you which platform is faster. The benchmark is obviously browser dependent so I ran all numbers on the same version of Chrome (8.0.552.237). The test platforms were the same as before: 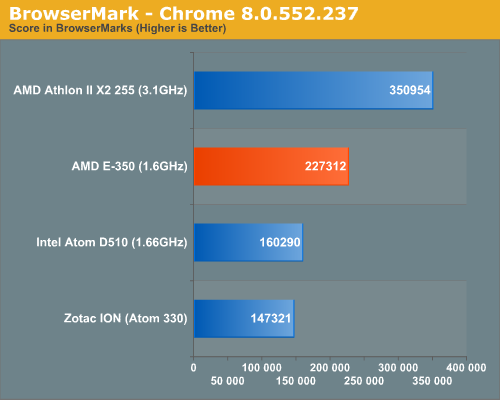 SunSpider is a collection of javascript benchmarks that we typically run to compare smartphones. It ends up being a good way to compare one aspect of web browsing performance between these entry level platforms. 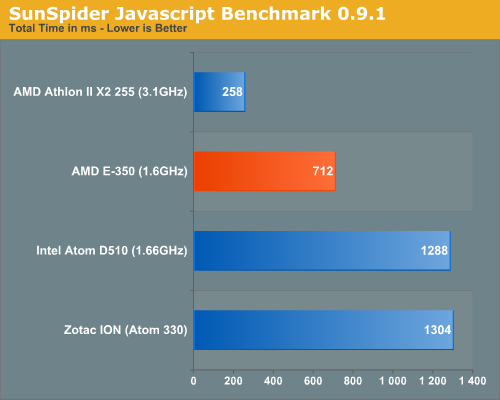 The Brazos advantage over Atom actually climbs when we look at pure js performance. The E-350 is 80% faster than the Atom D510 here. The Athlon II advantage grows as well. Web browsing can be very CPU bound at times.

Brazos, like Atom, will never compete with its bigger brothers. There’s only so much you can do with a very tiny die. What AMD’s platform does provide however is a stepping stone between Atom and the lower end beefy x86 cores, which is something we’ve needed.

Many of you wanted even more real world testing, focusing on things like application launch time and system boot time. Ask and you shall receive is one of our policies around here (within reason) so I put together a drive image with a ton of applications, games and data. I measured the time it took to boot to the Windows 7 desktop as well as timed individual application launches.

Boot time is a difficult thing to compare between platforms. Everything from BIOS optimizations to the type of video card you have in the system can impact boot time. In this case, the E-350 system managed to boot 13% faster than the Atom system.

Individual applications, specifically light weight apps (e.g. Google Chrome, Media Player Classic), launch relatively quickly on both Atom and Brazos. This is largely due to the fact that I’m testing with an SSD. Regardless there’s still no appreciable difference in launch time between the platforms when the drive bottleneck is removed (the difference doesn’t grow as you add bottlenecks in). Where we see the E-350 really shine is in the larger, more complex applications and games.

Sonar 8 launched 17% faster on the E-350 vs. Atom, while Starcraft II launched in almost half the time of the Atom D510 (although I suspect part of the advantage there is GPU related). Not all application launches were faster on the E-350. Occasionally applications would launch faster on the D510, but that seemed to be the exception rather than the rule. Overall system performance is naturally faster on Brazos compared to Atom.

Bring the Athlon II into the picture and things look different. You can cut most of Brazos’ launch times in at least half to get an idea of the Athlon II’s performance.