We’ve already covered how the shift from VLIW5 to VLIW4 is beneficial for AMD’s computing efforts: narrower SPUs are easier to fully utilize, FP64 performance improves to 1/4th FP32 performance, and the space savings give AMD room to lay down additional SIMDs to improve performance. But if Cayman is meant to be a serious effort by AMD to relaunch themselves in to the GPU computing market and to grab a piece of NVIDIA’s pie, it takes more than just new shaders to accomplish the task. Accordingly, AMD has been hard at work to round out the capabilities of their latest GPU to make it a threat for NVIDIA’s Fermi architecture.

AMD’s headline compute feature is called asynchronous dispatch, a long word that actually does a pretty good job of describing what it does. To touch back on Fermi for a moment, with Fermi NVIDIA introduced support for parallel kernels, giving Fermi the ability to execute multiple kernels at once. AMD in turn is following NVIDIA’s approach of executing multiple kernels at once, but is going to take it one step further.

The limit of NVIDIA’s design is that while Fermi can execute multiple kernels at once, each one must come from the same CPU thread. Independent threads/applications for example cannot issue their own kernels and have them execute in parallel, rather the GPU must context switch between them. With asynchronous dispatch AMD is going to allow independent threads/applications to issue kernels that execute in parallel. On paper at least, this would give AMD’s hardware a significant advantage in this scenario (context switching is expensive), one that would likely eclipse any overall performance advantages NVIDIA had. 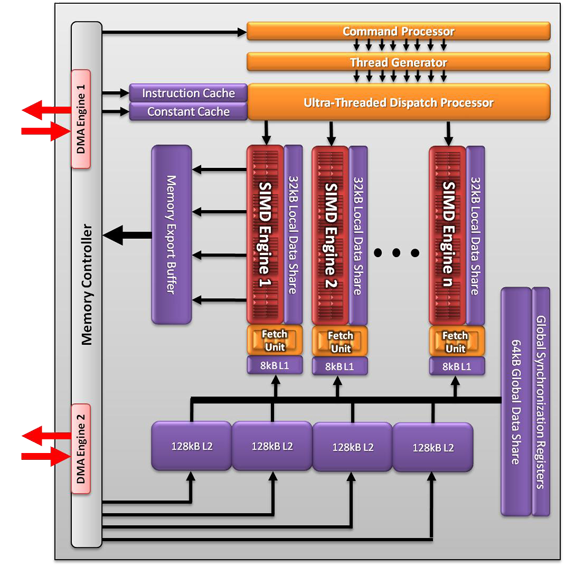 Fundamentally asynchronous dispatch is achieved by having the GPU hide some information about its real state from applications and kernels, in essence leading to virtualization of GPU resources. As far as each kernel is concerned it’s running in its own GPU, with its own command queue and own virtual address space. This places more work on the GPU and drivers to manage this shared execution, but the payoff is that it’s better than context switching.

Meanwhile the rest of AMD’s improvements are focusing on memory and cache performance. While the fundamental architecture is not changing, there are several minor changes here to improve compute performance. The Local Data Store attached to each SIMD is now able to bypass the cache hierarchy and Global Data Store by having memory fetches read directly in to the LDS. Meanwhile Cayman is getting a 2nd DMA engine, improving memory reads & writes by allowing Cayman to execute two at once in each direction.

Finally, read ops from shaders are being sped up a bit. Compared to Cypress, Cayman can coalesce them in to fewer operations.

As today’s launch is primarily about the Radeon HD 6900 series AMD isn’t going too much in depth on the compute side of things, so everything here is a fairly high level overview of the architecture. Once AMD has Firestream cards ready to go with Cayman in them, there will likely be more to talk about.