Like any RAID array of SSDs, there's currently no way to pass TRIM along to member drives. Once data is written to the RAID array it remains tracked and accounted for until the addresses are overwritten. This is the performance over time degradation issue we talked about at the beginning of our SSD coverage a couple of years ago.

I'm still in the early stages of measuring the real world impact of this bug and I made SandForce aware of it two weeks ago. At this point I'd simply caution against operating a SandForce drive near capacity filled with primarily incompressible data (e.g. compressed videos, photos). The problem is even more sensitive on a card like the RevoDrive x2 since there's no way to secure erase the drive to fully recover from a reduced performance state.

Expect to hear more about this in the next major SSD article on AnandTech.

The RevoDrive x2, like its predecessor, continues to be a very niche product. Both sequential and random performance are measured in the multiple hundreds of megabytes per second. Like all SandForce drives, the RevoDrive x2's performance is highly dependent on the type of data you're moving. Highly compressible data will see speeds as high as 800MB/s, while incompressible data may behave more like it would on a single SSD from Crucial. The beauty of SandForce's technology is you get great performance on traditional desktop workloads, but as always you need to be mindful of what you're storing on the drive when you decide to go with SF.

The reality for OCZ however is there’s no performance benefit to purchasing a RevoDrive x2 over four Vertex 2s and creating your own RAID array. We’re talking about a simple RAID-0 here, something any performance mainstream motherboard supports right out of the box. To make for an even tougher sell, the RevoDrive x2 will likely cost more than four Vertex 2s. The original Revo was supposed to be slightly more affordable than an array of Vertex 2s, but a quick look at Newegg shows us that you pay a $40 premium for the Revo. 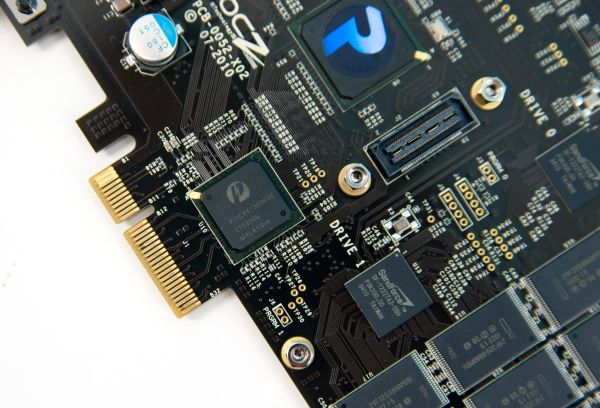 What OCZ (and other companies) ultimately need to do is introduce a SSD controller with a native PCI Express interface (or something else other than SATA). SandForce’s recent SF-2000 announcement showed us that SATA is an interface that simply can’t keep up with SSD controller evolution. At peak read/write speed of 500MB/s, even 6Gbps SATA is barely enough. It took us years to get to 6Gbps SATA, yet in about one year SandForce will have gone from maxing out 3Gbps SATA on sequential reads to nearing the limits of 6Gbps SATA.

On the surface, OCZ is offering us what we want - a high performance PCIe SSD. However the RevoDrive needs to offer something more than ease of installation.

All of the major controller players are hard at work on PCIe based SSDs, but I haven’t been made aware of immediate plans to release any of them. The focus continues to be winning 2.5” SATA SSD market share at this point.