As we alluded to in the opening of this article, NVIDIA is once again pushing the overclockability of their GPUs. The GF106 GPU at the heart of the GTS 450 is supposed to be about as overclockable as the GF104 GPU instead the GTX 460, and there’s little doubt that this is the case. NVIDIA’s partners are already on the bandwagon, and are offering heavily overclocked cards. Or for the do-it-yourself types, even the average reference card should be quite overclockable as long as you’re willing to take the risk of the periodic dud.

The GTS 450 is already supported by the latest version of MSI’s excellent afterburner software, and keeping with their policy MSI has enabled overvoltage support for all cards using the same VRMs as the reference card. So we were able to overvolt all of our reference cards and our factory overclocked cards. The VRMs on all of the cards except the Asus card top out at 1.162v, however for safety reasons (and the fact that the VRMs aren’t even passively cooled) we limited ourselves to 1.15v. 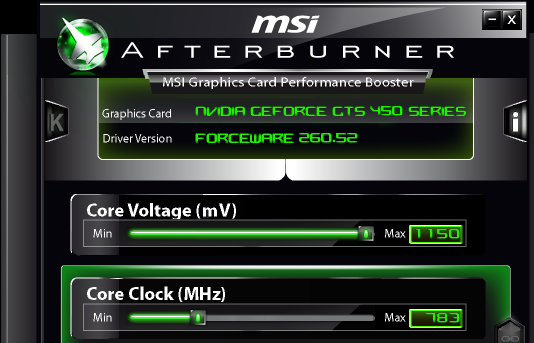 Unlike the GTX 460 launch where the vendor cards we had all came with a mild factory overclock, for the GTS 450 launch all of our cards have a significant factory overclock. 3 of the 4 are at 920MHz or better, which is a 137MHz (17%) overclock over reference speeds.

Even with voltage tweaking capabilities there was a very noticeable range in the overclockability of our cards. The worst card was one of the reference cards, which only hit 930MHz even at 1.15v. The best cards were the Asus and Palit cards at 985MHz. This puts the average overclock at just over 955MHz, which isn’t too far off from the factory overclocks already on some of these cards.

Meanwhile 4.2GHz seems to be the wall for memory overclocking. The GTS 450 is only equipped with 4GHZ GDDR5, so this may not be a fantastic outcome but it is realistic.

Overclocking (or rather overvolting) has the usual outcome when we look at power, temperature, and noise. The extra power enables extra performance, but it completely blows the performance-per-watt of the GTS 450 cards. Temperature and noise levels rise, but both are actually still quite manageable even at 1.15v. The only things holding the GPU back are the VRMs feeding it, and the innate limits of what the GPU can reach. Given this, it makes little sense not to overclock as long as you have a card with a suitable limit.

Finally, as a testament to how poorly a pair of GTS 450s in SLI get along with each other when they’re right next to each other, we weren’t able to get away with overvolting them at all. Even at 1.1v, the covered card would ultimately reach a thermal runaway under FurMark – the fan would max out and the temperature would start climbing in to the 90s. This shouldn’t be an issue with cards that are separated, but overclocking is definitely not on the menu when they’re packed together.