The heavy—50kg—QSSC-S4R server found its way to our lab. The ODM (Original Design Manufacturer) is the Taiwanese firm Quanta, who designed the server jointly with Intel. The 4U server is equipped for maximum expandability with 10 PCIe slots, quad gigabit Ethernet onboard, and 64 DIMM slots.

The enormous amount of DIMM slots is a result of the use of eight separate memory boards. Each memory board has two memory buffers and eight DIMMs onboard.

A 7+1 hot-swap, redundant fan module setup cools this system down. Notice that the disk system is not in front of the cooling as in most server systems. That is a plus, as the disks should not get the coldest air: disks perform best with medium temperatures (30-40°C, 86-104F) as the lower viscosity of the grease in the rotation motor puts less stress on the rotating components. Google’s study also suggests that disks should be kept at a higher temperature than the rest of the server.

The CPUs and DIMMs however should be kept as cool as possible to reduce the leakage power. The fans are well positioned: the memory boards and the heatsinks of the CPUs right behind them get the coolest air. In the back of the server you find the motherboard. You can see that the heatsinks on the 7500 chipset receive extra airflow. 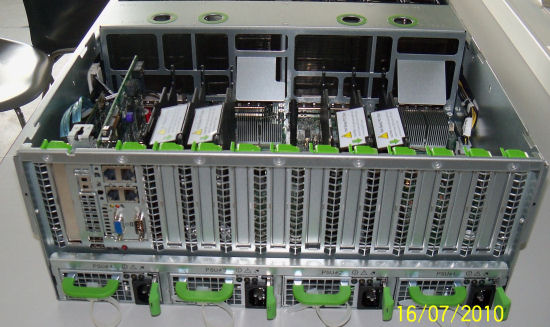 Four 850W high efficiency power supplies feed this massive machine in a 2+2 or 3+1 configuration. You can find more detailed information about this QSSC-S4R server here. The other benchmarked configurations are identical to this page.