Last but not least we have Asus’s ENGTX460 768MB TOP, easily the most interesting card in today’s roundup. Asus has completely forgone the reference design for one of their own, utilizing their own PCB and cooler.

Starting with the PCB, Asus is using their own PCB here, apparently necessary for the card’s voltage modification abilities. Notably the PCIe power plugs are placed at the top of this card instead of the rear as in a reference design, making the PCIe power plugs easier to reach and also removing obstructions from the rare of the card for ventilation purposes. Asus also tells us that this card is a member of its Xtreme Design video card family, which means the PCB is reinforced (note: we did not test this) and contains an additional resettable fuse as added protection against an overcurrent load. 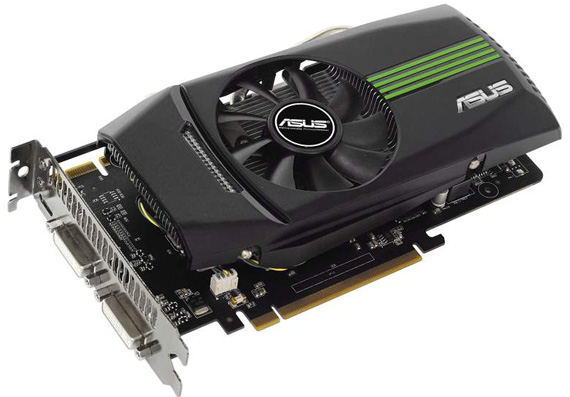 Sitting on top of the PCB is Asus’s custom cooler, which is similar to but not quite the same as the GTX 460 reference cooler. Here Asus uses a similar double copper heatpipe design, but rather than using a semi-closed cover the cooler fully vents hot air towards both the front and the back of the card. Running almost the entire length of the card is an aluminum finned heatsink, with one of Asus’s dust-proof fans sitting in the center. Towards the rear of the card is a smaller heatsink mounted on top of the card’s VRMs, which combined with the airflow from the fan provides cooling for the VRMs. As this is a very open and breezy cooler, case ventilation is of greater importance here, particularly when this card is overvolted. 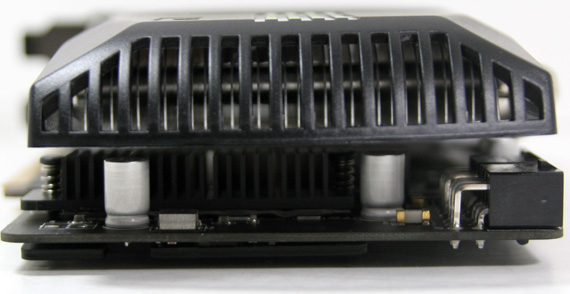 While the PCB is 8.25” long like the reference GTX 460 PCB, the cover for the cooler runs longer than the card. As a result the effective length of the card is just short of 9”, so you will need a bit more room than a normal GTX 460 to fit the card, although the top-facing PCIe power plugs will help to offset this. Meanwhile at the front of the card is a set of the usual ports for an NVIDIA GTX 400 series card: 2x DVI and a mini-HDMI port.

Bundled with the card is Asus’s in-house overclocking software: SmartDoctor and GamerOSD. Unfortunately for Asus SmartDoctor isn’t anything to write home about, as almost immediately we ran in to trouble with it when the window stopped moving while we were dragging it around. However at this point the biggest flaw with it is that it can only increase the core clock on the ENGTX460 to 800MHz, which is below what a good GTX 460 can do even without voltage modification. For this reason you’re effectively forced to use 2 overclocking utilities to get the most out of the ENGTX460: SmartDoctor to overvolt, and then another utility to actually set the core clock above 800MHz. 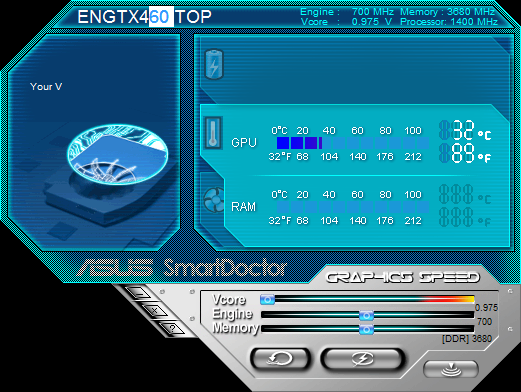 Voltage tweaking is undoubtedly the biggest feature of the card, with Asus displaying the ability prominently on the box. With SmartDoctor we were able to increase the core voltage on our sample from 0.975v up to 1.087v. Asus uses a floating slider, however the VRMs on the card actually only support voltage modification in 0.0125v steps. In our experience we found that the card could only take up to 1.062v before resetting itself to safety mode, likely a result of overloading the VRMs. Unfortunately SmartDoctor is the only way to overvolt this card at the moment, so you’re stuck using it.

We’ll get in to the full details of overclocking later, but for now we’ll rest with this: at 1.062v we were able to increase the core clock to 930MHz, some 80MHz better than any of our non-overvoltable GTX 460s. 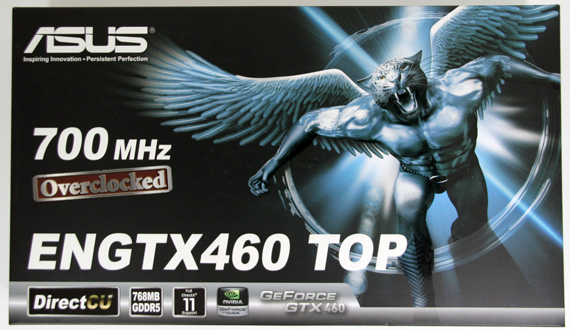 Rounding out the package is the usual quick start guide, a collector of adapters, a driver/utility CD, and rather unexpectedly a pleather CD/DVD organizer bearing the Asus logo. The entire card comes boxed in a somewhat large and fancily packed box.