I’ve publicly praised Apple for its honesty in reporting battery life over the past couple of years, and the iPhone 4 gives me no reason to stop.

The 4 has an integrated 5.25Whr battery. That’s around 95% of the battery capacity of the HTC EVO 4G, despite having much lower power frequirements. It’s also a 16% increase over the 4.51Whr battery that was in the iPhone 3GS. This means at bare minimum, assuming the iPhone 4 doesn’t draw any more power than the 3GS, we should get 16% more battery life.

In reality, we get much more.

When Apple introduced the iPhone 3G it dropped battery life to a level that we’d been stuck at ever since. The 3GS improved battery life a bit through better CPU power efficiency but you still didn’t have enough juice to get through a day without charging.

The iPhone 4 changes all of that. The combination of a larger battery and a more power efficient SoC results in an incredible amount of battery life.

Our first test is a basic web browsing benchmark. We've scripted almost two dozen webpages to load, pause for 20 seconds, then forward on to the next page. None of the pages use any Flash. This process repeats until the battery is dead. Screen brightness on the iPhones was set to 50% and the screens remained on the whole time. 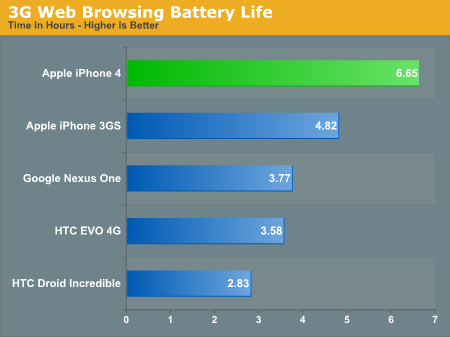 Battery life improved nearly 38% with the iPhone 4. It's clear that while the A4 improved performance, the real improvement was in battery life. This test has enough idle time where good power management and low idle power can really impact the results. There's simply no other similar smartphone that can touch the 4's battery life.

We then repeated the same test over WiFi instead of 3G: 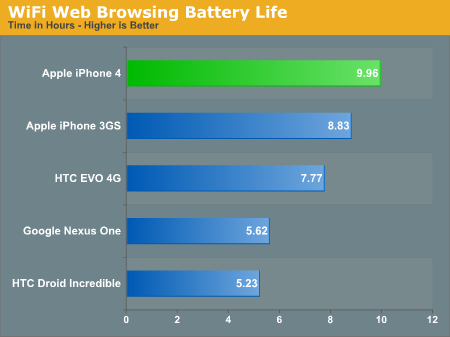 Apple claims the iPhone 4 will last for up to 10 hours over WiFi, we measured just under that at 9.96 hours. The improvement here is only 12.8%, which tells me that we're nearing the limit of how efficiently Apple can manage power in WiFi mode. There's a wall that we're quickly approaching with this current architecture.

To measure talk time we play MP3s on repeat into the mic of a phone and use it to call the phone being tested. The process continues until the test phone dies. In this case the screen is allowed to go to sleep, as it normally would be if you were talking on the phone: 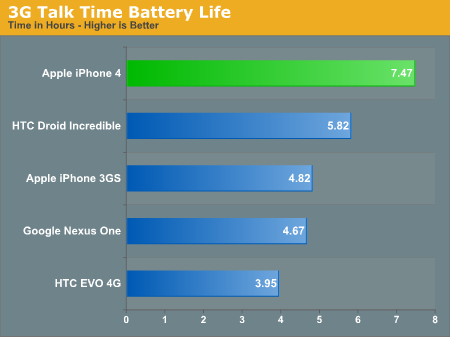 Apple promised up to 7 hours of 3G talk time with the iPhone 4. We measured 7.47 hours. That's an increase of 54.9% over the iPhone 3GS. While in a phone call the majority of the A4 SoC is powered down, so the efficiency improvements here have to do with how much less power the A4 consumes while off and the new Skyworks 3G modem (the iPhone 3GS used an Infineon modem).

In our iOS 4 review we looked at the impact multitasking had on the iPhone 3GS' web browsing battery life. I ran our 3G web browsing test while playing music through Pandora in the background. I repeated the test with the iPhone 4 for today's article: 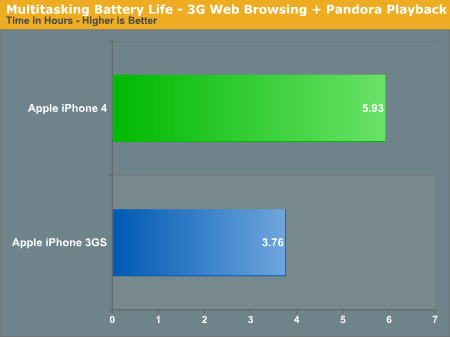 We actually see our largest battery life improvement in this test. With a 57.7% increase in battery life over the 3GS, the iPhone 4 is not only more efficient at idle workloads but also when the SoC is constantly busy. The A4 SoC is rumored to be built on a 45nm process compared to the 65nm SoC used in the 3GS. With a moderate increase in clock speed we should be seeing a lot of the power savings that a full node shrink brings to the table.

The battery life offered by the iPhone 4 is spectacular. My iPhone 3GS could hardly get through a full day of work while traveling, I'd always need to hunt for an outlet before heading into my dinner meeting. I'm about to take my first trip with the iPhone 4 but I get the feeling that I might finally be able to make it through dinner.

Early reports of 20 and 30 hours of battery life are simply exaggerated. They're only possible if you let the phone idle in your pocket for the majority of that time. In other words, if you don't use the phone it lasts for a long time. While that's a testament to the platform's incredible idle power, the real world usage is good enough to stand on its own. It's better than any iPhone or Android phone I've tested thus far.