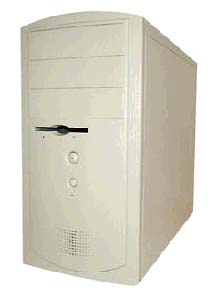 The Avance 8B04 is an ATX mini tower that offers an clean and simple look in one of the most compact packages in existence Standing at just 14.6 inches tall, it's barely taller than the minimum height necessary to hold an ATX form factor motherboard and smaller than some microATX cases.

Usually, to accomplish such a short case, manufacturers will mount the power supply on its side. This produces two undesirable side effects - access to the CPU is blocked and the case width increases a few inches. But the 8B04 is not wide at all, just about two inches wider than a 5.25" device - about as skinny as a case can be. A quick peak at the back of the case reveals the first clue to Avance's solution - the power supply fan is mounted outside the case as shown below.

The front bezel is made of solid plastic that won't break or chip easily. In an effort to provide an elegant look for the 8B04, they decided to round the top of the bezel off. This by itself isn't so bad, but a side effect is that the bezel protrudes above the top of the case about half an inch, which can be slightly annoying since it seems to catch everything as the case is being moved around. The power button features an integrated power light. The reset switch is just below, followed by the HDD access light. Both switches offer good tactile feedback and are large enough to be easily pressed. The sole external 3.5" drive bay is molded for a floppy drive. The eject button is unfortunately loose and can be left sticking out whether or not a floppy is in the drive - Avance could easily remedy this with a small spring on this button.

Opening the 8B04 is quick and easy - simply remove two thumb screws per side panel and slide the side panels off the back using indentations that act as handles. The two side panels initially look identical and seem interchangeable. However, upon further inspection, one panel features vents for an optional fan, while the other does not. The bezel snaps in and out of the case frame fairly easily. Unfortunately, there is no way to physically lock the 8B04 to prevent unauthorized entry.