The M11x design conveys a futuristic style, with an angled front and rear on the chassis similar to the M17x. Available in either "Cosmic Black" or "Lunar Shadow" (our test system is the grayish "lunar" option), the M11x also has design elements like zoned LED lighting, though there aren’t quiet as many zones as on the larger chassis. You can individually set the various zones to one of 20 colors (including black/off); the zones on the M11x consist of the Alienware logo beneath the LCD, keyboard backlighting, front grille LEDs, the Alien head above the keyboard, and the (barely visible) indicator lights for WiFi and Caps Lock. The keyboard, front grille, and Alienware logo can all be set to a solid color, a shifting color, or blinking (which is just as horrid as it sounds). The color fade effect would be a lot better if it cycled smoothly between the colors; right now, it fades from the first color to the second color and then jumps back to the start color before fading again. Finally, the eyes on the alien head above the keyboard light up for hard drive activity. Note that the alien head on the top of the laptop always glows white (as far as we can tell). If you get the either of the optional Alienware TactX mouse and keyboard, you can also control lighting on those devices via the included AlienFX software. Alienware sent us the TactX mouse with a 5000 dpi laser sensor and braided cable: it looks nice and works well, but it's tough to justify the $100 price tag.

The chassis is made of magnesium alloy with plastic (or at least painted) surfaces and it feels very durable. All of the major surfaces also have a matte finish, the exception being the LCD and its bezel, which is covered by a single sheet of glossy plastic. (Groan….) One nice feature is the large palm rest and touchpad—they’re significantly bigger than most other 11.6” laptops. The battery pack is only accessible if you remove the bottom cover, which is one way Alienware manages to cut down on the size of components while still packing a 63Wh battery into an 11.6" chassis. Thankfully, even with the CPU overclocked you can expect to get upwards of 6 hours battery life (4+ hours of video playback) from the M11x.

Expansion options are reasonable, with three USB 2.0 ports (one powered), a mini FireWire port, and a flash memory reader. Video output options consist of all the major standards: VGA, HDMI, and DisplayPort—it’s nice to see two digital video outputs on such a small chassis. Not surprisingly, there’s no ExpressCard expansion slot, and there’s no eSATA either. The sole cooling vent is on the rear of the chassis, and the fan tends to switch between slow and faster speeds quite frequently—unless you’re playing games, in which case the fan spins at high speed the whole time. The maximum noise level from the fan isn’t particularly loud, but if you’re just doing office work or surfing the Internet (even with the discrete GPU disabled), the frequent changes in fan speed are definitely distracting. Dell would have been far better off setting the minimum fan speed a bit higher in order to avoid the need to bump up the RPMs every minute or so. 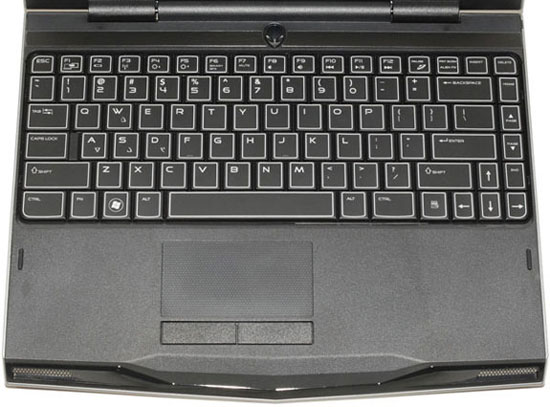 While the system looks great, there are a few areas where it falls a bit flat (pardon the pun). The keyboard has reasonably sized keys, but they’re packed close together and have a soft feel (which to me feels a bit mushy). My personal “gold standard” is the ThinkPad Classic keyboard, and the M11x keyboard is merely “okay” for long periods of typing. However, we need to be fair: compared to other 11.6” laptops, the keyboard on the M11x is far more comfortable to use. Acer and Gateway for example (1410/1810 and  EC14 respectively) have flat keys that also lack separation and don’t have great action. Here, I find the large palm rest on the M11x makes it clearly superior to other netbooks and ultraportables. The colored LED backlighting also looks fantastic, and it's great for seeing the keys if you happen to be at a dark LAN party. If you like chiclet or beveled keys, you may not like the M11x keyboard much; I find the keyboard fatiguing (outside of playing games), but those with smaller hands and/or narrower shoulders would probably feel right at home. After the Lenovo T410, it's hard not to feel like this is a case of form over functionality. The keyboards are so close to the same size that Alienware could actually fit the T410 keyboard into the M11x—the T410 keyboard is only about 2% larger! Considering this is clearly a custom chassis and keyboard, for better or for worse Alienware chose this specific layout and design over other options.

Access to the RAM, hard drive, and other internal components is via a single large cover on the bottom of the M11x. Getting to the CPU/GPU requires dismantling the chassis, and there's not much point considering the default components. The battery is quite large and takes up most of the back-right section of the chassis; honestly, the only reason the battery isn't easily swapped out appears to be for aesthetic and/or frame integrity concerns. We're not sure how many people will miss the ability to easily swap out batteries on the road, but at least replacing the battery when it gets old won't require too much work (i.e. unlike the newer MacBooks).

Finally, as a gaming laptop one would expect most owners will want to play games on the M11x. It's certainly possible, but without an internal optical drive your options are a bit limited. Either you'll need to get games via a digital distribution service (i.e. Steam, EA Downloader, etc.) or you'll need an external USB DVDRW. We installed most of our games over the network, with local copies on a server, which does bring up another cut corner: Fast Ethernet. It's really quite pathetic to see "cheap" laptops like the Acer 1410/1810T come with Gigabit Ethernet while a "luxury" gaming laptop from Alienware chintzes out and provides Fast Ethernet. When we were installing 80GB of games over the NIC, yes, it definitely made a difference. Really, there's no reason any modern computer shouldn't come with Gigabit Ethernet; it's ubiquitous and cheap, and saving $0.50 by using Fast Ethernet on an $800+ laptop is silly.

There are certainly areas on the M11x that could be improved—most notably the LCD panel—but overall we're quite pleased with the design. It feels reasonably sturdy, looks sleek, and provides many good features. But what most of our readers really want to know is: how well does it run games? We've loaded up our standard selection of games and applications and put the M11x to the test. Interested in the world's smallest gaming laptop? Turn the page and let's get to the real meat of this review.