Ahhh…. summer is upon us and so is a new Intel product release in the near future. The Lynnfield processor series and P55 chipset will be arriving in the next couple of months. As such, we are already receiving various P55 motherboard samples from a variety of companies for early first looks and opinions. We really do not have anything new to report on Lynnfield and P55 since our early preview, except that final silicon spins will be ready by the end of this week according to various sources.

ASUS has delivered one of the first P55 boards to our labs and granted us permission to provide an early look at it as long as performance numbers were not generated and we kept the BIOS options private. We know, this will be about as fun as playing with a stack of wet blankets on a cold day, but at least we can start the process of providing first looks at products that will be on sale shortly.

The first motherboard of many to come is the ASUS P7P55D EVO that is destined for the mid-range of ASUS’ extensive P55 lineup that covers every market sector from entry level to the enthusiast level ROG boards. Final pricing is not yet available but based on chipset pricing and market conditions, expect to see P55 boards starting around $120 and rapidly hitting the $239 mark at launch. This particular motherboard will probably end up in the $160~$180 sector based on the feature set and options.

Before we get to the board layout and options, we need to state that this color scheme is not the final design based on conversations with ASUS today. However, the layout/features checklist is final and any comments you might have about those two areas are welcome. We should have a press photo of the final color scheme shortly, but it features an all black and dark blue color palette. This is good news as we had more than a few choice words with ASUS over the holiday weekend after we opened the box. 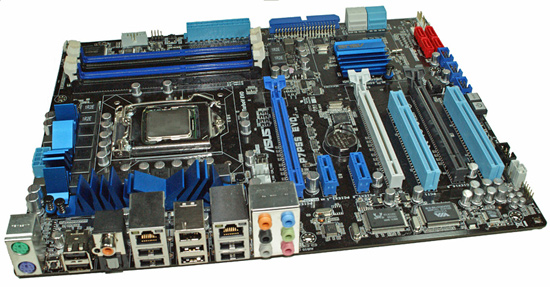 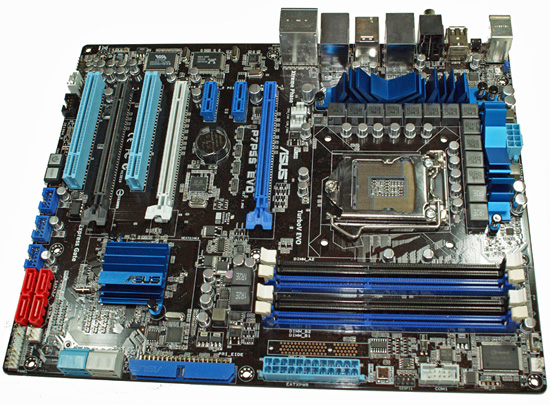 Taking a quick look around this board, we find the overall layout is very good but could be better. The good, ASUS placed the 24-pin and 8-pin ATX power connectors, IDE connector, and most of the SATA ports along the edge of the motherboard. In addition, the PCIe/PCI slot layout is very good for those seeking many expansion slots or planning on SLI/CF operation.

The bad, we just do not care for the SATA slot arrangement and where the IDE connector is located, or even the fact that IDE is still on the board. We would rather see all of the SATA connectors grouped (right angle design) together where the current IDE connector is located. This might seem contradictory to our good listing, but if ASUS had to go with IDE, at least the layout is serviceable at this time.

ASUS also includes Power and Reset switches on the edge of the board. Another user friendly feature is the inclusion of debug LED (red lights) to indicate potential problems with the CPU, DRAM, VGA, or Boot devices at time of POST or if the board locks on the user. 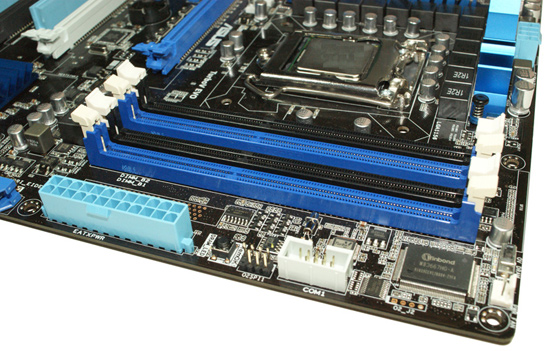 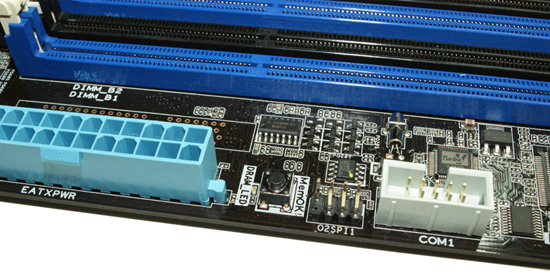 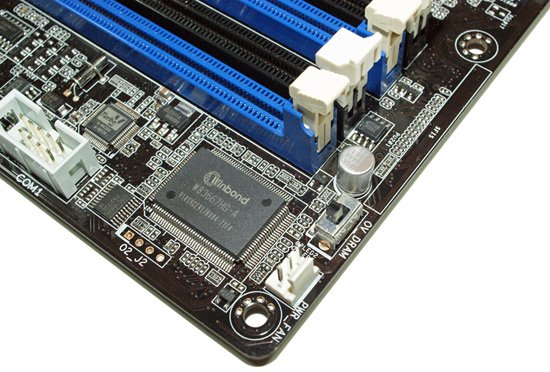 There are quite a few features located in the memory slot area. First off, the memory slots will receive the single clip insertion design from the current ROG i7 boards as it is nearly impossible to change memory modules with a video card installed. ASUS continues to offer their MemOK! technology that will reset the memory timings to safe values in case the user settings are too aggressive causing the system not to POST. While it sounds impressive, we have yet to need it as the BIOS recovery system will typically kick in and reset the board to stock values correctly. The OV DRAM switch lets you override the BIOS limits on VDimm, which are already more than high enough to void warranties or damage your CPU. 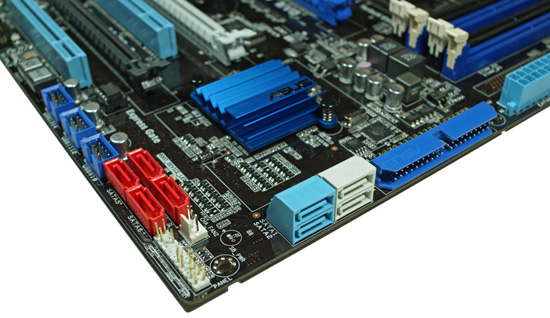 Our least favorite area of the board contains the six SATA 3Gb/s ports provided by the P55 chipset that feature RAID 0, 1, 5, and 10 support along with Intel’s new version 9 Matrix Storage technology. The two white SATA connectors are powered by the new Marvell 88SE9123 6Gb/s SATA chipset that unfortunately is not ready for prime time yet due to continuing driver and hardware problems. We expect this controller to be pulled from the board if the problems persist. The IDE connector (driven by the Marvell controller), P55 chipset, front panel connectors, and the three USB headers are also located in this area. 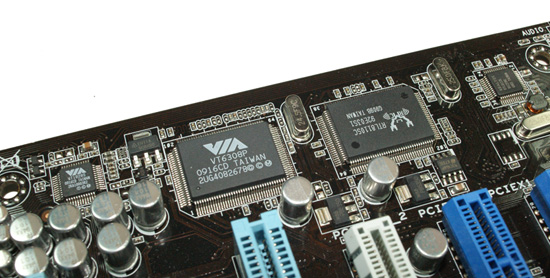 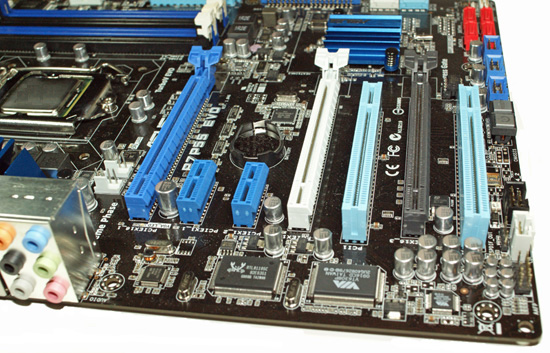 The board features two PCIe 2.0 x1 slots, two PCI slots, and three PCIe 2.0 x16 slots (x16/x4 or x8/x8/x4). The x4 PCIe slot is provided by the P55 chipset and is not designed for optimal graphic’s performance. In fact, NVIDIA has pulled SLI support for this slot and we expect AMD to do the same for CrossFire due to performance reasons. The layout of the PCI/PCIe slots is very good and allows for a single PCIe x1, PCIe x4, and PCI slot when running SLI or CrossFire.

ASUS utilizes the VIA VT6308P chipset for IEEE 1394a support, VIA VT1828S 8-channel HD audio codec with support for DTS Surround Sensation, and the Realtek 8112L/8110SC Gigabit LAN controllers for LAN operation including support for AI NET2. Why manufacturers will not utilize the native Intel Gigabit LAN support in the P55 is beyond us. The VIA VT1828S actually provides decent onboard audio support with better output quality than the standard Realtek ALC888 series. However, the Win7 drivers are still not working properly so our initial results were with Vista 64. 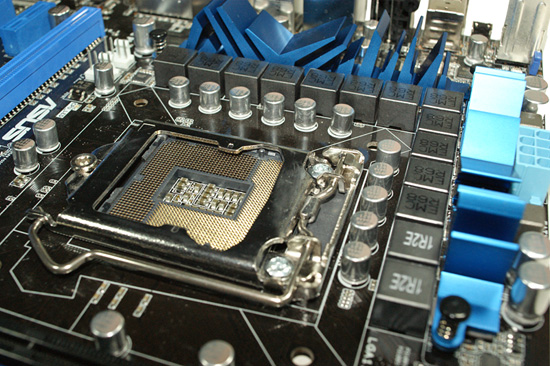 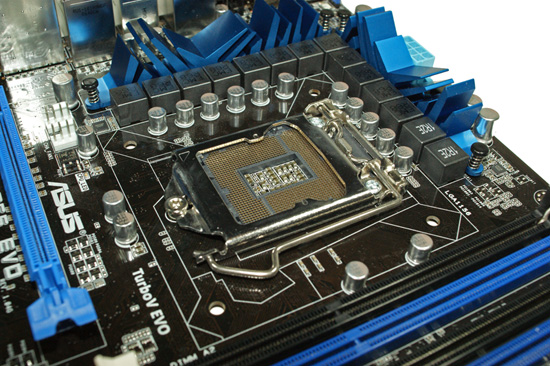 The CPU area is uncluttered and a push/pull CPU fan/heatsink design like the Vigor Monsoon III will interfere with memory in the first dimm slot, unless the mounting design on the cooler is changed. The back of the board is clean and we expect various air/water coolers that require a back plate to work fine. What we would like to see is Socket 775 mounting holes on this board as an option as yet another socket change is wearing thin on us. ASUS is utilizing a 12-phase power system that has allowed easy 230+ Bclk rates in early testing. 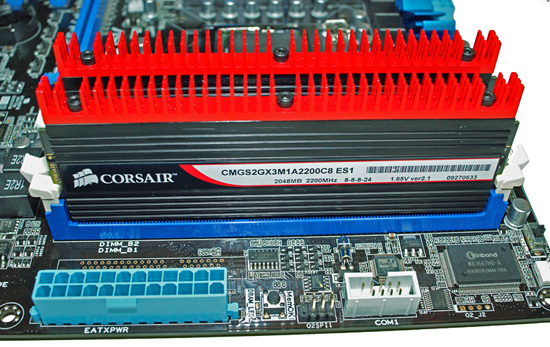 We have been testing this board with the Corsair DDR3-2200 C8 memory kit. Yes, these modules feature the Elpida Hyper ICs that have been giving us trouble in the labs but so far, these particular modules have behaved themselves. 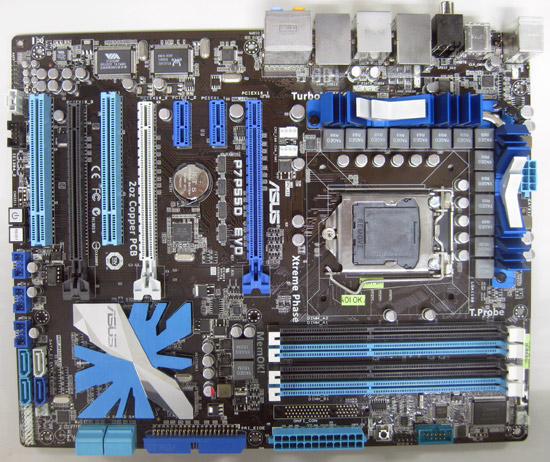 Update - This is a picture from ASUS tonight of the final production board design and color scheme. The revised heatsink designs certainly have an artistic flair about them. Otherwise the new color scheme is not bad at all, although the light blue tends to make us think of Gigabyte's recent boards.