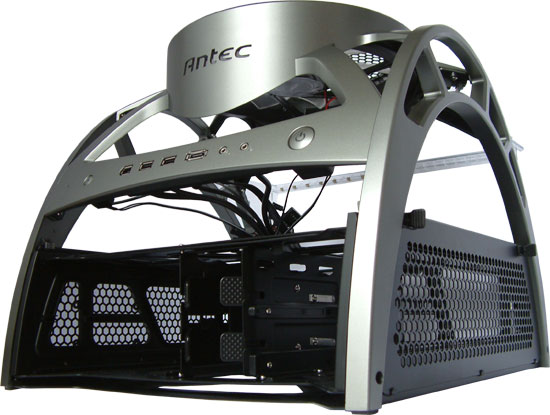 At Computex earlier this year, Antec showed us a prototype of the Skeleton. We recently received a sample of the final product. The whole chassis looks different now, which is good. Let's first start with a quick discussion of the case functionality. Who would need or want something like this? Frankly, I don't. I like small and sleek cases, preferably stored under my desk where I don't see or hear the PC. However, this case may be great for people that frequently change motherboard jumpers, and add or reconfigure other items. Some might even like the appearance of the case, which is a highly subjective area; many of us think it looks rather ugly, but as they say, beauty is in the eye of the beholder.

If you're mostly interested in the functionality, the outward appearance is rather irrelevant. Form follows function and that is an important part of this chassis. It looks somewhat like a lunar station with its half-moon structure and the large 250mm fan in the top. The front has the usual buttons and jacks: power, IEEE1394 FireWire, two USB ports, an eSATA port, and headset and microphone jacks. On the left side we find the reset button as well as a small status LED embedded in the plastic frame.

All of the cables hang out the back of the case, since there is nowhere to hide them. In the center of the chassis is a mounting plate for a large ATX motherboard, and as we will below you can slide the tray out of the chassis. The back has a thin clear acrylic frame installed that helps provide support for expansion cards (i.e. graphics cards). Below the motherboard in the back is the tray for the power supply. The sides feature a metal plate perforated with hexagonal shapes, and like the motherboard tray the PSU tray is removable. The fan in the top can be turned on and off with a small switch at the back, and a second switch allows you to control the LED lights.

Installing the components is fairly easy. You can slide the whole inside of the frame out the back by removing two screws on each side in the back. The power supply mounts in a small cage that can also slide out off the main frame. You can use a variety of power supplies, with an 80mm fan or 120mm fan, though a model with an 80mm fan would make more sense in this case since there are fewer obstructions to block airflow. After installing the main components, the motherboard easily slides into the frame and you can tighten the screws. 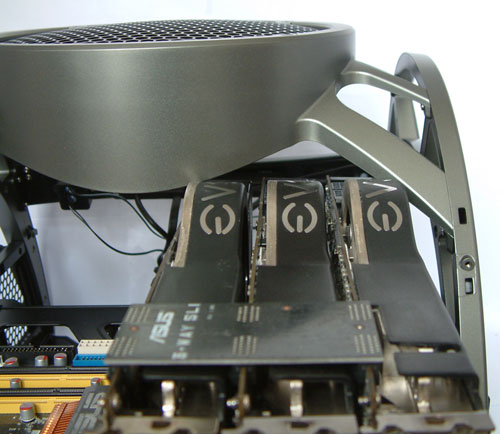 Houston? We have a problem.

Unfortunately, we couldn't install our three NVIDIA GeForce 8800 Ultras since we could not slide the motherboard tray back into the chassis. As you can see above, the first and last graphics cards collide with the upper part of the chassis. However, if your graphics card does not have a bulge like the 8800 Ultra you will not have this problem. In addition, we were able to slide the motherboard tray into the chasses without the cards and maneuver them into the slots inside of the chassis (though this required more effort than usual). The installation of all the other components went without problem.

Antec delivers a very sturdy case with the Skeleton and it's already available in the U.S. Europe still doesn't have any in stock, and the one shop that lists the Skeleton is asking €340 ($465) for it. The U.S prices are a little more moderate, starting at $140. Whether you find that price acceptable or not is for you to decide. However, there is another issue to consider. An open case like this does not have any EMI protection, which means in the worst case you will have problems with radio and/or TV reception when the system is on, particularly if it's near your stereo/television. Despite that, the case is something new in a market full of normal, dull cases. The exclusivity alone will attract some customers; there are certainly users who frequently swap components or simply like the unique design who will be interested in getting their claws on the Skeleton.