This test writes 4KB in a completely random pattern over an 8GB space of the drive to simulate the sort of random writes that you'd see on an OS drive (even this is more stressful than a normal desktop user would see). I perform three concurrent IOs and run the test for 3 minutes. The results reported are in average MB/s over the entire time.

I've had to run this test two different ways thanks to the way the newer controllers handle write alignment. Without a manually aligned partition, Windows XP executes writes on sector aligned boundaries while most modern OSes write with 4K alignment. Some controllers take this into account when mapping LBAs to page addresses, which generates additional overhead but makes for relatively similar performance regardless of OS/partition alignment. Other controllers skip the management overhead and just perform worse under Windows XP without partition alignment as file system writes are not automatically aligned with the SSD's internal pages.

First up is my traditional 4KB random write test, each write here is aligned to 512-byte sectors, similar to how Windows XP might write data to a drive: 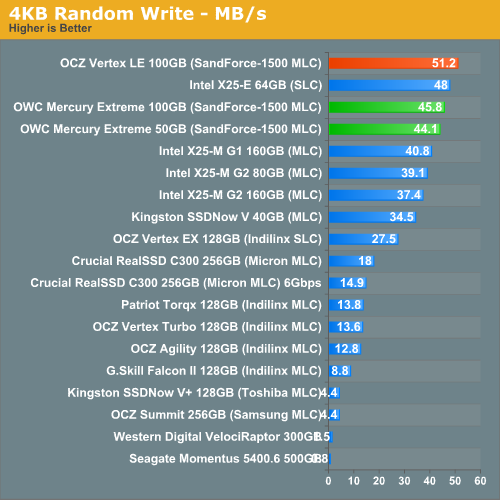 Unaligned 4KB random writes are a bit lower, but nothing tremendous. For some reason both of the OWC Mercury drives actually performed lower than our Vertex LE sample in this test. These should all be the same drive. As we saw in the last review however, in order to better represent performance under modern OSes we need to look at 4K aligned writes since that's what ends up happening most of the time. 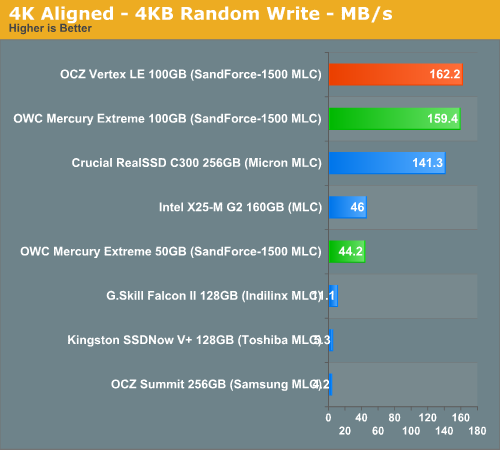 Peak random write performance isn't nearly as good on the 50GB drive. While the 100GB SF-1500 based drives can muster around 160MB/s, the 50GB drive can only manage 44.2MB/s. It's not a deal breaker by any means, and shouldn't really be noticeable in real world usage - but this is the downside to the 50GB drive. Note that at 44.2MB/s, it's still roughly the same speed as Intel's X25-M G2. 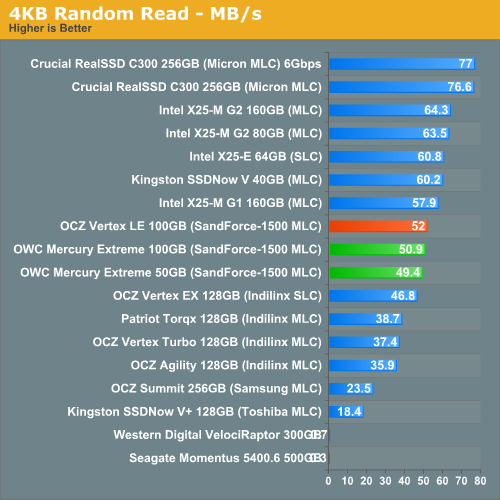