Today’s launch is the Redwood based Radeon HD 5670. The 5670 is a full Redwood card, with all of its functional units enabled and running at its “full” clockspeed. The card we’re looking at is clocked at 775MHz core, and 1GHz(4GHz data rate) on the GDDR5 RAM. With a 128-bit memory bus, this gives the card 64GB/sec of memory bandwidth. 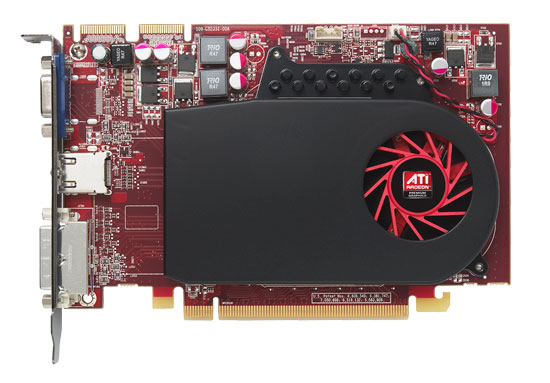 AMD stock photo, our sample boards are black and don't have CF connectors 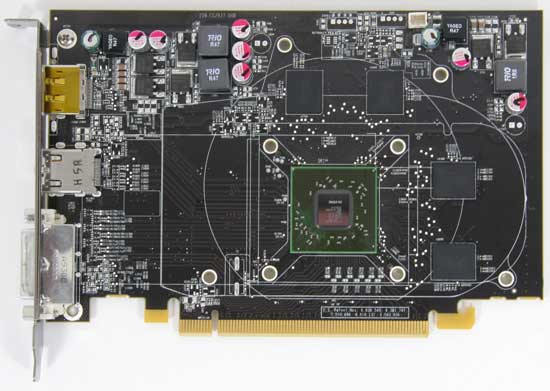 Attached to the card are 4 128MB Hynix GDDR5 RAM chips. These chips are specified for a 4GHz data rate, so AMD is only finally pairing up 5000-series cards with appropriately fast RAM. What this means is that unlike the 5700 and 5800 series, there won’t be any freebie memory overclocking to take advantage of the gap between the card’s clocks and what the RAM is specified for. What you see is what you get.

As is common for cards targeted at the sub-$100 price range, the 5670 runs sans external power. AMD puts the TDP for the card at 61W, which compares favorably to the 70W of the GT 240 that we saw last week. AMD tells us that they were merely designing this card to be under 75W, and that the 61W TDP of the shipping product is a good bit lower than they had been planning on.

With the lower power usage of this card, the need for a dual-slot cooler (and the 5000 series distinctive shroud) is gone. The 5670 is equipped with a slightly larger than normal single-slot blower, which blows air towards the front of the card. We call this cooler slightly larger than normal since AMD has extended the heatsink portion slightly to cover all of the GDDR5 RAM chips on the card, as evidenced by the heatsink jutting out of the top. This is an interesting design choice from AMD, since other cards like the 5750 do not apply any cooling to the GDDR5 RAM chips. This does leave us wondering whether cooling the RAM is necessary, or if AMD is doing it for cosmetic reasons. 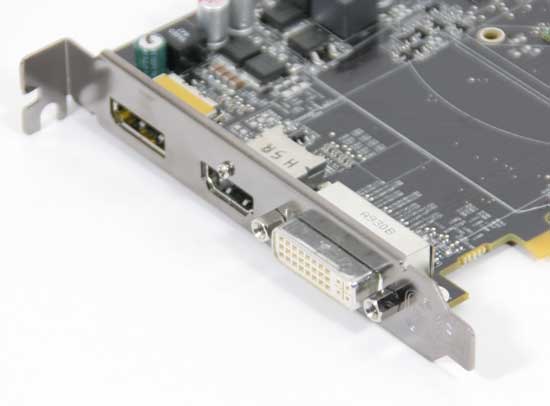 The card measures at 6.61”, and finally drops AMD’s traditional Eyefinity port configuration. By moving to a single slot, AMD has dropped the 2nd DVI port, leaving the card with a DisplayPort, an HDMI port, and a dual-link DVI port. The card will be able to drive a second DVI monitor using an HDMI-to-DVI adapter, although only a single link. The 5670 still has full Eyefinity capabilities, and a 3rd monitor can be hooked up to the DisplayPort for that task. AMD tells us that the Redwood chip can actually drive 4 monitors, but none of the launch cards will configured for that (not that the 5800 cards were either). AMD’s ideal Eyefintiy configuration for this card is to pair it up with a trio of cheap 16:9 19” monitors, although as we’ll see the card doesn’t really have enough power for gaming like this.

The need for an active DisplayPort adapter is still an issue however, and at $99 the adapters are as much if not more than the card itself. At this point the best solution is a DisplayPort native monitor, but those are still fairly rare and seldom cheap.