As we mentioned in our 5870 review, Electronic Arts pushed out the DX11 update for Battleforge the day before the 5870 launched. As we had already left for Intel’s Fall IDF we were unable to take a look at it at the time, so now we finally have the chance.

Being the first DX11 title, Battleforge makes very limited use of DX11’s features given that the hardware and the software are still brand-new. The only thing Battleforge uses DX11 for is for Compute Shader 5.0, which replaces the use of pixel shaders for calculating ambient occlusion. Notably, this is not a use that improves the image quality of the game; pixel shaders already do this effect in Battleforge and other games. EA is using the compute shader as a faster way to calculate the ambient occlusion as compared to using a pixel shader.

The use of various DX11 features to improve performance is something we’re going to see in more games than just Battleforge as additional titles pick up DX11, so this isn’t in any way an unusual use of DX11. Effectively anything can be done with existing pixel, vertex, and geometry shaders (we’ll skip the discussion of Turing completeness), just not at an appropriate speed. The fixed-function tessellater is faster than the geometry shader for tessellating objects, and in certain situations like ambient occlusion the compute shader is going to be faster than the pixel shader. 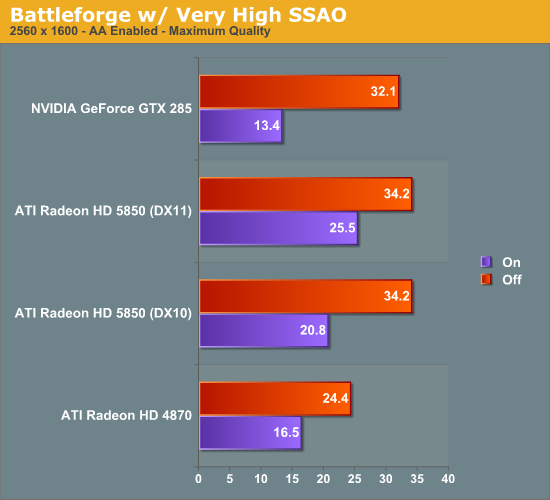 Update: We've finally identified the issue with our results. We've re-run the 5850, and now things make much more sense.

As Battleforge only uses the compute shader for SSAO, there is no difference in performance between DX11 and DX10.1 when we leave SSAO off. So the real magic here is when we enable SSAO, in this case we crank it up to Very High, which clobbers all the cards as a pixel shader.

Our only big question at this point is whether a DX11 compute shader is really necessary here, or if a DX10/10.1 compute shader could do the job. We know there are some significant additional features available in the DX11 compute shader, but it's not at all clear on when they're necessary. In this case Battleforge is an AMD-sponsored showcase title, so take an appropriate quantity of salt when it comes to this matter - other titles may not produce similar results

At any rate, even with the lighter performance penalty from using the compute shader, 25% for SSAO is nothing to sneeze at. AMD’s press shot is one of the best case scenarios for the use of SSAO in Battleforge, and in the game it’s very hard to notice. For the 25% drop in performance, it’s hard to justify the slightly improved visuals.