The CPU and its Performance

I keep mentioning that the iPhone 3GS is faster than its predecessor, but these numbers speak louder than anything I can write:

This is a generational improvement in performance folks. The new 3GS is, at worst, only 42% faster than the iPhone 3G. At best? Nearly 200% faster. Apple was right to abandon the aging ARM11 core used in the iPhone 3G in favor of the Cortex A8 in the 3GS. I also wonder if any of these performance gains are helped by using faster NAND flash in the 3GS. It wouldn't be enough to account for all of the performance boost, but perhaps 5 - 10%.

WiFi and 3G web page rendering speed is also a lot faster on the 3GS:

I re-ran all of my web browsing performance tests on all of the phones to provide the most accurate comparison. I ran the Palm Pre data before the 1.04 OS release came out but apparently that update didn't improve browsing performance so I wouldn't expect much difference there.

The 3GS makes everything faster, including web browsing over the 3G network. Just to be clear, I used the full site versions of all of these web pages - I did not use any mobile or iPhone optimized sites in the timing. I tried to perform all of the tests at the same time to eliminate any network strangeness. Each test was performed three times and I reported the average. 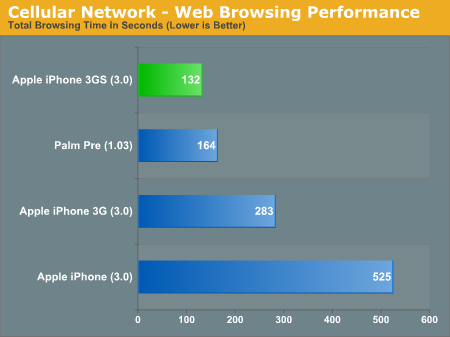 It is important to realize what we're talking about here. These phones, particularly ones that are using old ARM11 based SoCs, are CPU bound while loading web pages. Even while browsing over a relatively slow < 1Mbps cellular network, the CPU still ends up being a significant bottleneck to web page rendering performance. Compare that to how things work on the desktop - when was the last time you felt your PC was too slow to browse the web? The Cortex A8 is a huge step forward here, and once again, there's no excuse for putting any ARM11 in a high end smartphone today.

Let's remove more bottlenecks and see how big of a difference the CPU alone makes, the following tests were performed over WiFi:

Remove the cellular bottleneck and things mostly stay the same between iPhones. The new 3GS is nearly 100% faster than the old 3G (and iPhone original). The major change comes from the comparison to the Palm Pre. The 3GS is now only 8% faster than the Pre, a significant improvement from the earlier releases of webOS. I do firmly believe that Palm has much room to improve performance on its device to bring it up to speed compared to the 3GS. It's running very similar hardware to the iPhone 3GS, there's no reason for it to feel so much slower. 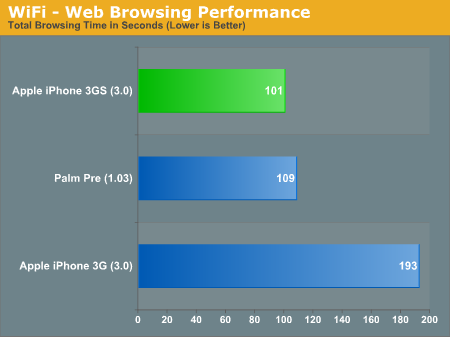 Let me take this opportunity to also chastise HTC for using the Qualcomm MSM7200A in the new Hero smartphone. Here we have yet another Android OS phone using a horrendously old ARM11 based CPU, it’s just unacceptable. The table above shows you how much more performance is on the table if you move to Cortex A8. I’m still waiting for a handset maker to do Android justice and pair it with a truly robust hardware platform.