To find out how well the new lithium polymer battery does I ran my usual suite of Mac battery life tests. First up was my wireless web browsing test:

The wireless web browsing test uses the 802.11n connection to browse a series of 20 web pages varying in size, spending 20 seconds on each page (I timed how long it takes me to read a page on Digg and came up with 36 seconds; I standardized on 20 seconds for the test to make things a little more stressful). The test continues to loop all while playing MP3s in iTunes.

This is an extremely light test as none of the web pages have any flash ads, but it’s a valid test of very light wireless usage. 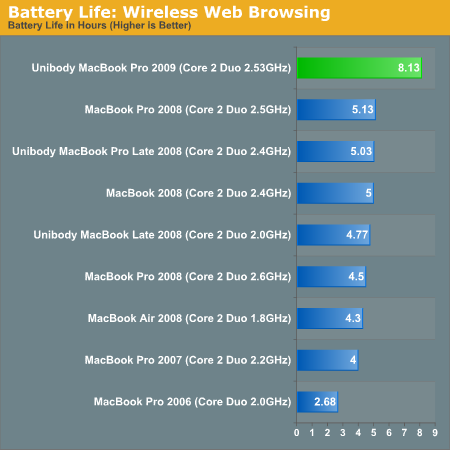 Eight, freakin, hours. I couldn't believe it. In my lightest test, the new 15-inch MacBook Pro lasted eight hours and eight minutes. That's with the screen at half brightness (completely usable) and no funny optimizations. The notebook is just playing music and surfing through a lot of my old reviews. There's no way this could be right. Maybe my test was too light?

I threw together another test just to make sure. The key flaw in my initial wireless web browsing test is that it none of web pages have any Flash on them. While constantly loading web pages will ensure the CPU can't go into deep sleep, Flash on the pages would make sure that the CPU utilization remains higher at all times. The next test I put together was this:

I strung together 8 reviews on AnandTech and put them each on a single page, images and all. I then scoured the web for big, animated Flash ads and added anywhere from 1 - 4 ads per page; all Flash. Each page is designed to forward to the next after 10 seconds and the loop continues indefinitely. On each machine I opened three Safari windows and pointed them at the first page in the sequence. In the background, once more, I had iTunes playing MP3s.

I found that CPU utilization varied from 5 - 35% during this test, which is about what I saw when I was actually surfing the web myself. The addition of Flash should make it more stressful, but it's still a fairly light usage test. My original web browsing test got us 8 hours, so what about this new one?

Six and a half hours, out of a 5.5 lbs notebook. For comparison, the older MacBook Pro could only manage 3 hours and 17 minutes in the same test. The new notebook lasted almost twice as long. Mathematically, this doesn't make sense. There's only a 46% increase in battery capacity, there shouldn’t be a ~100% increase in battery life...ever.

While the original web browsing test was using data from my original unibody MacBook Pro review, this second web test used a brand new MacBook Pro (purchased just weeks before this week's MacBook Pro announcement). The two notebooks had the same amount of memory (4GB), the older MacBook Pro had a slower CPU (2.4GHz vs. 2.53GHz) and a 7200RPM hard drive but the differences shouldn’t account for an extra 54% increase in battery life.

Apple must have done more than just increase battery capacity in the new MacBook Pro. My third test continues to support my findings. This is my heavy workload benchmark.

For this benchmark I'm downloading 10GB worth of files from the net (constant writes to the drive), browsing the web (same test as the first one) and watching the first two episodes of Firefly encoded in a 480p XviD format (Quicktime is set to loop the content until the system dies).

The older MacBook Pro managed 3.25 hours in this test. The new one? Just under 5: 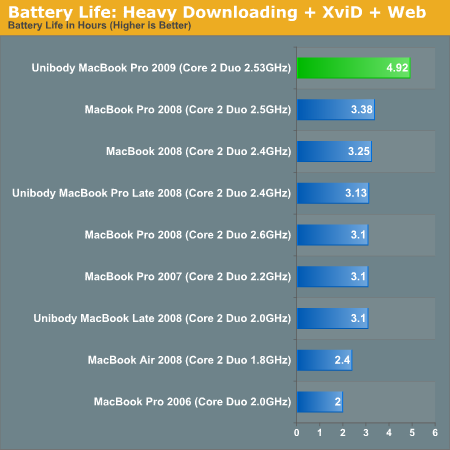 That's a 51% improvement in battery life. It's close enough to the max theoretical 46% improvement for me to think that the significant gains in wireless web browsing are due to improvements in idle power optimizations. It's possible that all of the components in the new MacBook Pro have been optimized for lower voltages at idle.

Either way, Apple's 7 hour claim is well within reason. For light workloads, even on WiFi, you can easily expect 6.5 - 8 hours out of the new 15-inch MBP. As I write this article on that very system I'm told that I have nearly 8.5 hours left on my charge. If you do a lot of writing on your notebook, the new MBP is exactly what you'll want; it will easily last you on a cross-country flight if you need to get work done.

My heaviest workload delivered just under 5 hours of battery life, a figure that the old MBP could only attain while running my lightest workload. This thing rocks.

I also have to commend Apple for delivering realistic battery life specs on its laptop. While 7 hours definitely involves a light workload, it is more than attainable as I've shown in the tests above.

A quick search shows that even Dell's Studio 15 only offers a battery rating of up to 5.5 hours. It looks like, once again, other notebook makers will have to play catch up to Apple in this department.