Today, NVIDIA will release it's new 185 series driver. This driver not only enables support for the GTX 275, but affects performance in parts across NVIDIA's lineup in a good number of games. We retested our NVIDIA cards with the 185 driver and saw some very interesting results. For example, take a look at before and after performance with Race Driver: GRID. 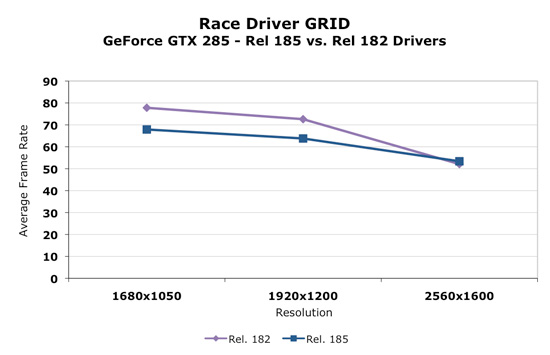 As we can clearly see, in the cards we tested, performance decreased at lower resolutions and increased at 2560x1600. This seemed to be the biggest example, but we saw flattened resolution scaling in most of the games we tested. This definitely could affect the competitiveness of the part depending on whether we are looking at low or high resolutions.

Some trade off was made to improve performance at ultra high resolutions at the expense of performance at lower resolutions. It could be a simple thing like creating more driver overhead (and more CPU limitation) to something much more complex. We haven't been told exactly what creates this situation though. With higher end hardware, this decision makes sense as resolutions lower than 2560x1600 tend to perform fine. 2560x1600 is more GPU limited and could benefit from a boost in most games.

Significantly different resolution scaling characteristics can be appealing to different users. An AMD card might look better at one resolution, while the NVIDIA card could come out on top with another. In general, we think these changes make sense, but it might be nicer if the driver automatically figured out what approach was best based on the hardware and resolution running (and thus didn't degrade performance at lower resolutions).

In addition to the performance changes, we see the addition of a new feature. In the past we've seen the addition of filtering techniques, optimizations, and even dynamic manipulation of geometry to the driver. Some features have stuck and some just faded away. One of the most popular additions to the driver was the ability to force Full Screen Antialiasing (FSAA) enabling smoother edges in games. This features was more important at a time when most games didn't have an in-game way to enable AA. The driver took over and implemented AA even on games that didn't offer an option to adjust it. Today the opposite is true and most games allow us to enable and adjust AA.

Now we have the ability to enable a feature, which isn't available natively in many games, that could either be loved or hated. You tell us which.

What is Ambient Occlusion you ask? Well, look into a corner or around trim or anywhere that looks concave in general. These areas will be a bit darker than the surrounding areas (depending on the depth and other factors), and NVIDIA has included a way to simulate this effect in it's 185 series driver. Here is an example of what AO can do: 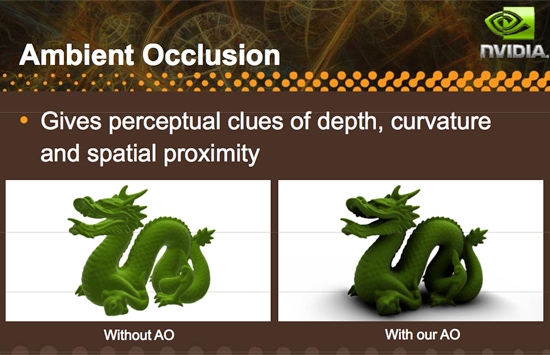 Here's an example of what AO generally looks like in games: 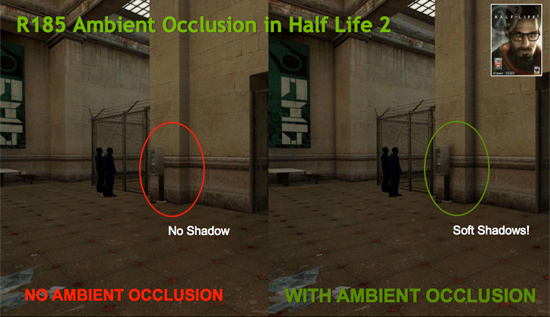 This, as with other driver enabled features, significantly impacts performance and might not be able to run on all games or at all resolutions. Ambient Occlusion may be something some gamers like and some do not depending on the visual impact it has on a specific game or if performance remains acceptable. There are already games that make use of ambient occlusion, and some games that NVIDIA hasn't been able to implement AO on.

There are different methods to enable the rendering of an ambient occlusion effect, and NVIDIA implements a technique called Horizon Based Ambient Occlusion (HBAO for short). The advantage is that this method is likely very highly optimized to run well on NVIDIA hardware, but on the down side, developers limit the ultimate quality and technique used for AO if they leave it to NVIDIA to handle. On top of that, if a developer wants to guarantee that the feature work for everyone, they would need implement it themselves as AMD doesn't offer a parallel solution in their drivers (in spite of the fact that they are easily capable of running AO shaders).

We haven't done extensive testing with this feature yet, either looking for quality or performance. Only time will tell if this addition ends up being gimmicky or really hits home with gamers. And if more developers create games that natively support the feature we wouldn't even need the option. But it is always nice to have something new and unique to play around with, and we are happy to see NVIDIA pushing effects in games forward by all means possible even to the point of including effects like this in their driver.

In our opinion, lighting effects like this belong in engine and game code rather than the driver, but until that happens it's always great to have an alternative. We wouldn't think it a bad idea if AMD picked up on this and did it too, but whether it is more worth it to do this or spend that energy encouraging developers to adopt this and comparable techniques for more complex writing is totally up to AMD. And we wouldn't fault them either way.