Hyper Threading was a great technology, simply first introduced on the wrong processor. The execution units of any modern day microprocessor are power hungry and consume a lot of die space, the last thing you want is to have them be idle with nothing to do. So you implement various tricks to keep them fed and working as often as possible. You increase cache sizes to make sure they never have to wait on main memory, you integrate a memory controller to ensure that trips to main memory are as speedy as possible, you prefetch data that you think you'll need in the future, you predict branches, etc...

Enabling simultaneous multi-threaded (SMT) execution is one of the most power efficient uses of a microprocessor's transistor budget, as it requires a very minimal increase in die size but can easily double the utilization of a CPU's execution units. SMT, or as Intel calls it, Hyper Threading does this by simply dispatching two threads of instructions to an individual processor core at the same time without increasing the available execution resources. Parallelism is paramount to extracting peak performance out of any out of order core, double the number of instructions being looked at to extract parallelism from and you increase your likelihood of getting work done without waiting on other instructions to retire or data to come back from memory.

In the Pentium 4 days enabling Hyper Threading required less than a 5% increase in die size but resulted in anywhere from a 0 - 35% increase in performance. On the desktop we rarely saw a big boost in performance except in multitasking scenarios, but these days multithreaded software is far more common than it was six years ago when Hyper Threading first made its debut. 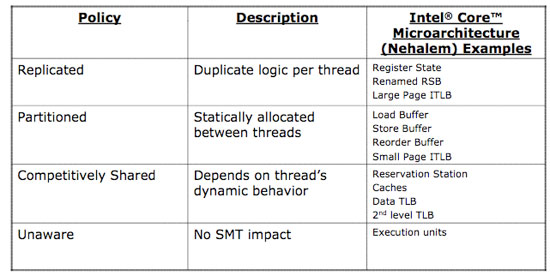 This table shows what needed to be added, partitioned, shared or unchanged to enable Hyper Threading on Intel's Core microarchitecture

When the Pentium 4 made its debut however all we really had to worry about was die size, power consumption had yet to become a big issue (which the P4 promptly changed). These days power efficiency, die size and performance all go hand in hand and thus the benefits of Hyper Threading must also be looked at from the power perspective.

I took a small sampling of benchmarks ranging from things like POV-Ray which scales very well with more threads to iTunes, an application that couldn't care less if you had more than two cores. What we're looking at here are the performance and power impact due to Hyper Threading: