One of the most important factors for an end-user in choosing a power supply is efficiency. Below we have three graphs that show the efficiency with 90, 120, and 230 VAC. The lower the input voltage is the lower the efficiency of the power supplies becomes; this is why the graphs on the last figure are much higher. We are calculating our loading chart according to Intel specifications of the latest ATX norm. However, we were asked to switch over to the 80Plus loading charts since more and more companies are using that now; rumors say that even Intel is using it already.

The difference between the specifications is that 80Plus is a more realistic calculation that loads the 12V rails much higher than the current Intel spec does. This results in higher efficiency ratings for starters. This is why our results don't quite match up with Enermax claims on their packaging; Enermax made that statement according to 80Plus tests. 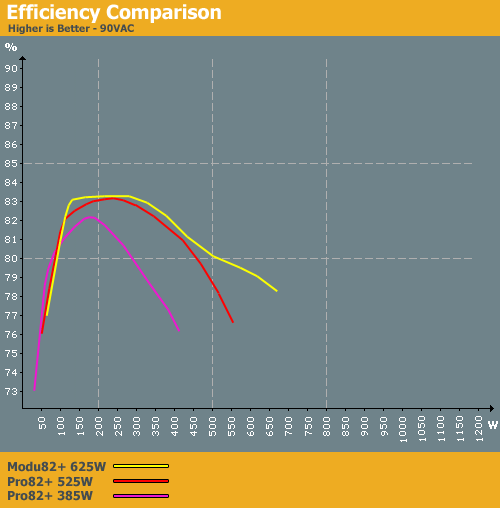 At the lowest input voltage, the 625W Modu82+ performs very well with a very long period of high efficiency. The 385W performs the worst with a short summit of just 82% and 190W of load. 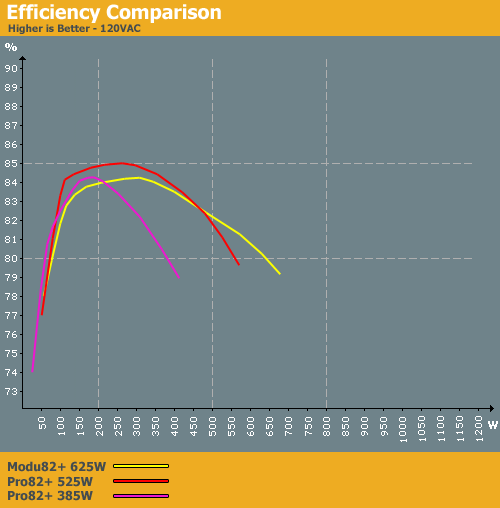 With 120VAC, the chart looks slightly different. Here we have the 525W version performing best and the power supply is able to come up with 84% at only 100W. It keeps this efficiency up to 400W and then slowly sinks. The small 385W version again performs worst and has only a short peak of 84% at 180W. 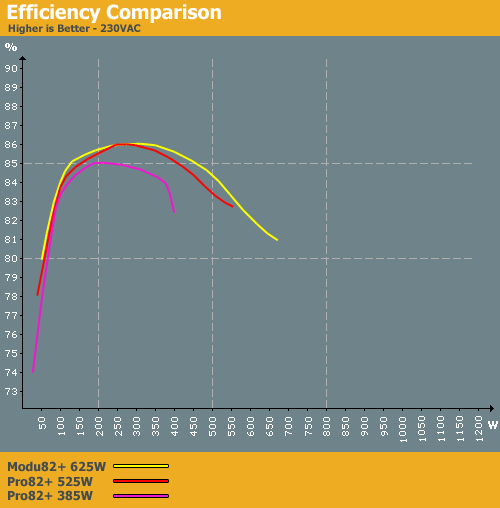 Finally, at 230VAC the graphs change again. As expected, the efficiency is much better. The 625W unit has a very nice and long lasting efficiency of over 85% from 100W of load. Even until full load of roughly 600W it keeps its efficiency high at a minimum of 82%. The 385W also performs well, but of course in a much smaller range. With only 50W of load, this power supply has 80% efficiency. It keeps efficiency above 82% even with 110% of load, which is a little more than 400W. These results clearly show the high performance of the tested units. 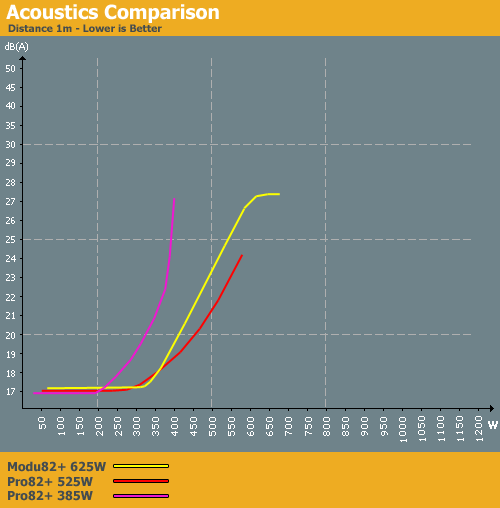 The fan control unit is the same in all the units, and it regulates the fans according to the load of the power supply. All of the units stay totally silent with only 17dB(A) and 500 RPM until 50% of their load. The fan then starts turning faster and reaches 1500 RPM with maximum load applied to each unit. Only the 525W model doesn't quite reach 1500 RPM, topping out at 1300 RPM instead and thus creating less noise with only 24dB(A) with 110% load!

In general, these power supplies are simply not audible during normal use. The fans run at slightly less than 500 RPM, which is very slow. You can only hear the fan when you get your ear within an inch or two of the fan. You will then hear a sliding noise. Even at full load, 27dB(A) isn't very loud and will qualify as near-silent for most users. If you run a high-end graphics card or two, the fans on the GPUs will definitely drown out the noise of the power supply at any load.