by Gary Key on September 21, 2007 12:00 PM EST
17 Comments | Add A Comment
17 Comments + Add A
Comment
Foxconn has been around for several decades and is one of the largest manufacturers of electronics components in the world. They have provided motherboards for a multitude of OEMs in the past, but it has only been more recently that they started to offer their boards in the retail market. Given their OEM provider roots, it's not too surprising that the initial Foxconn motherboards failed to cater to the enthusiast community.

Over time, Foxconn worked to correct this perception, and they released several motherboards using their "WinFast" branding that attempted to cater to this market. Unfortunately, as we stated in previous reviews, merely saying a product has "extreme performance" does not make it so. However, their first real amends to the performance oriented crowd occurred with their excellent C51XEM2AA motherboard based on the NVIDIA nForce 590 SLI chipset in the spring of 2006. That is an eternity in the PC business and after several attempts at wooing buyers with the "CORE" series of motherboards last year they are back again with a new series; more importantly, though, they now seem to have a general understanding of the target market this time around.

Foxconn is in the process of launching their new Quantum Force product line that will focus on the enthusiast users looking for product that excels in price/performance ratios while offering the latest technology. This all sounds very familiar to most of our readers, as this is an area where competitors like abit, ASUS, DFI, Gigabyte, and MSI have been offering distinctive products for several years. 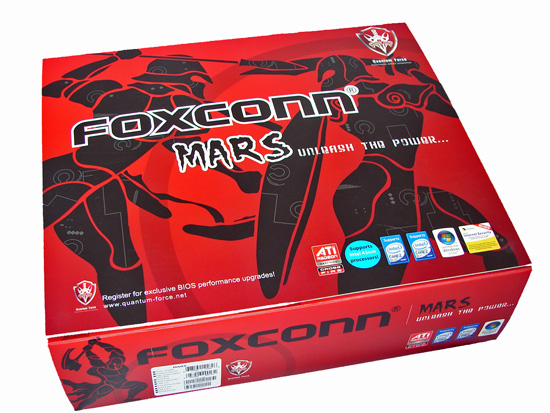 However, for Foxconn, this is truly a new experience for the company and marks (hopefully) the end of an era where words on a box were thought to make a product perform better. Also, Foxconn will be launching a specific website for the Quantum Product series shortly that will feature online product registration, access to beta BIOS downloads, forums, tutorials, and competitions designed for computer enthusiasts. Foxconn is also very interested in user feedback for these new products, and the engineers working on the products will be involved in the forums.

The first product in the Quantum Series is the Intel P35-based Foxconn MARS motherboard that will soon be followed with an X38-based product. The history buffs will already know this, but for the rest of us, MARS was best known as the Roman God of War. In early Roman history, Mars was the Roman god of spring, fertility, and vegetation while being the protector of cattle, fields, and boundaries. Mars is also considered a chthonic god (earth-god) and this helps to explain why he became a god of death and eventually the god of war. The month we know as March (Martius) is named after him and his Greek equivalent is the god Ares.

While the box art is interesting, it reminds us of two Andy Warhol inspired Spartans jousting and not the Crested Helmet MARS usually depicted in battle. But enough Roman Mythology - and yes, we left out a few details - we are here today to find out if the Foxconn MARS board represents the spirit and performance of the God of War, or if it's a better representation of the earlier God that spent his days protecting cattle. With that in mind, let's take a first look at what Foxconn has designed and will soon deliver to the performance sector.