Before we start talking about benchmarks, here's a short overview of the new models and their pricing in the competitive landscape. AMD is launching both 4/8-way (4S) and 2-way (2S) models of the new quad-core Opterons at speeds ranging from 1.7GHz to 2GHz. To keep things simple, we'll first take a look at the 4S (four socket) market. 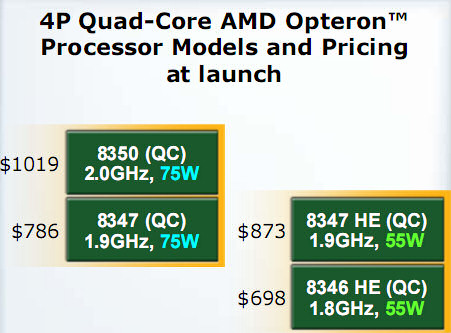 Let's see how the new Opterons compare to Intel's CPUs when it comes to pricing and power:


First of all, it is worth noting that the old Tulsa Xeons remain very expensive and are not even worth considering as they only offer half the performance of Tigerton. The same can be said about the Opteron 82xx series. These CPUs are clocked a lot higher which is interesting for applications that scale badly and need excellent single threaded performance, but nobody is going to buy a 4S machine for such an application. It will be interesting to see if AMD lowers the prices of these CPUs or not.

Back to Barcelona, it also has to face the newly launched Tigerton (of which we are preparing a review). It seems that AMD's CPUs might conquer the high performance blade market easy: AMD offers 55W (68W TDP) quad-cores for about $700-$900, while Intel wants no less than $2300 for their lower power 4S quad-core. Our first tests indicate that a 1.9GHz Barcelona should outperform a 1.86GHz Tigerton, but more testing is needed. For now, we can only conclude that Intel has priced itself out of the 4S blade market. Then again, pricing doesn't always seem to be the primary concern with blades.

AMD also positions the 2GHz 8350 against the Tigerton 2.13GHz, which should allow them to defend the new found territory: AMD has no less than 56% of the 4S market in the US. Basically, we can conclude that AMD's pricing in the 4S market should be quite competitive.

The 4S market has some great profit margins, but 75%-80% of the server market is 2S. Below is AMD's pricing for this very popular market. 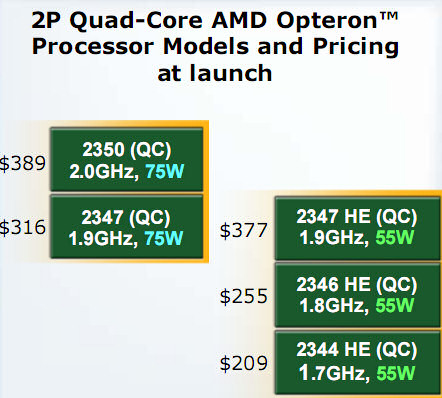 So how does AMD's pricing compare to Intel's?


AMD positions the 2350 2GHz between the 2.13 and 2.33GHz quad-core Xeon. The 1.9GHz version squarely targets the 2GHz E5335. AMD has no answer to the X5365 and E5355, but currently those CPUs are offered in a higher power consumption band, so this is not the really the end of the world. The 3.2GHz and 3GHz Opterons might still make sense for some hard to scale applications if AMD lowers the prices significantly.