While Seagate has not introduced capacities larger than 750GB or revised their product lineup since a year ago that does not mean they have not been busy. Their new 7200.11 series will be introduced shortly that features their next generation PMR technology. Along with several new product enhancements, Seagate will increase their per-platter capacities to 250GB and early testing shows sustained transfer rates right over 100 MB/s not to mention improved seek times. The new 7200.11 series will feature capacities from 250GB to 1TB. 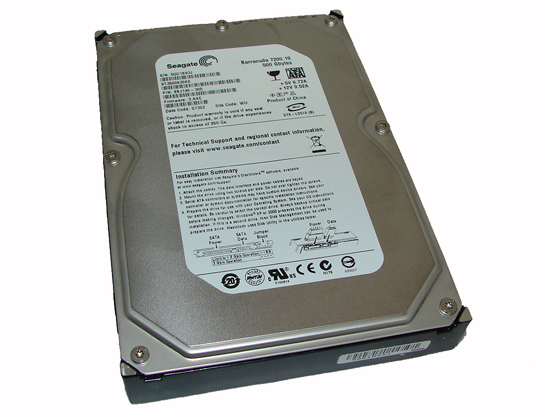 While that is an interesting bit of history as well as a brief look at what's coming down the pipeline, we are here today to discuss the Seagate Barracuda 7200.10 500GB drive. Historically, our Buyer's Guides have allowed 500GB hard drive recommendations in only the highest end systems where price is less of an issue. As hard drive capacities have now soared to 1TB range, we now see that 500GB drives have finally reached a point where they are a solid if not spectacular value for the majority of end-users who use their systems for everything from video/audio encoding to gaming. We are now seeing the 500GB drive category quickly becoming the new sweet spot for the desktop from both a cost and performance viewpoint.

Indeed, a quick look at today's prices shows that several 500GB hard drives have fallen below the $0.25-per-gigabyte level. The Seagate 500GB 7200.10 drive in particular has reached a threshold of $0.24 per gigabyte, making it one of the better values on the market today. However, we have to be honest here as the most recent 500GB desktop centric drives from Samsung and Western Digital offer a cost per gigabyte of $0.22. Our next storage article will take a look at these two drives.

Drive capacity is only one variables in the equation, however. Now that pricing has become very competitive, the consumer is able to look more aggressively at the feature set of the drives. Cache size, platter capacity (and number of platters), noise, thermals, power consumption, and warranty/support are only a few of the categories manufacturers need to address in order to earn a recommendation in our labs.

In this review, we will see how much attention Seagate has paid to these categories when developing their 7200.10 500GB hard drive, and if it shines above the direct competition from Hitachi's T7K500 in this increasingly crowded field. Let's find out how the Seagate 7200.10 500GB performs against other SATA based drives in its class.