For these tests, we depend on the hardware colorimeter and software to help calibrate and measure the results from the displays. As previously stated, we use a Monaco Optix XR (DTP-94) colorimeter and Monaco Optix XR Pro software. On desktop displays we normally do some basic calibration to try and select an optimal brightness level, and we also look at the maximum and minimum brightness available. At least for the laptops we've seen so far, we really see no purpose in reducing the maximum brightness level except when running off of batteries. The ASUS G2P might be bright enough that that's an option, but the other three laptops already feel rather dim to begin with. 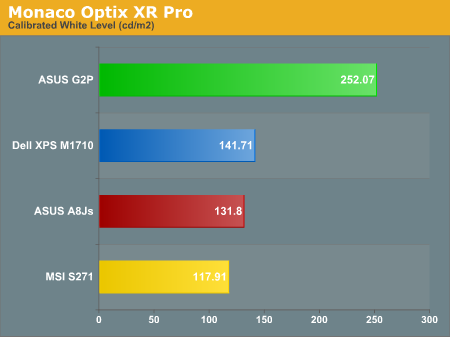 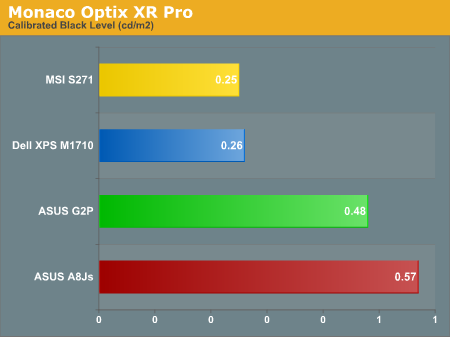 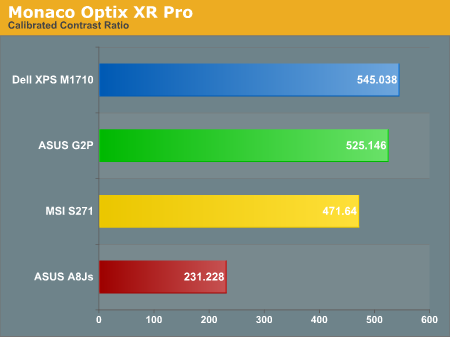 Objective testing confirms our impression that the ASUS G2P is easily the brightest display out of these laptops. The black levels may not be as dark as some people would like, but the net result is that you get a nice bright picture with a good contrast ratio. The ASUS A8Js goes the other route, offering mediocre whites and the worst blacks out of any of the laptops. This results in a very low 231:1 contrast ratio. The Dell and MSI laptops are similar in that both have dark blacks but only moderate whites. While this ends up giving the Dell XPS M1710 the highest contrast ratio, we definitely prefer the overall experience of using the G2P display.