Value Cooling: Two Towers for under $30

Both the Thermalright MST-9775 and the Scythe Katana outperform the retail Intel X6800 HSF at idle. Their performance is very similar, but not up to the cooling performance of the Tuniq Tower 120. 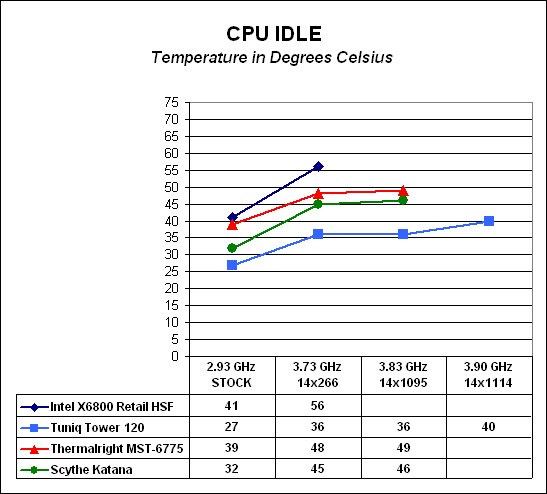 Where the very good Intel stock cooler keeps the X6800 at 41C at idle, the Thermalright MST-9775 manages 39C, which is a slight improvement. The Scythe Katana does even better in reducing idle processor temperature to 32C. However, neither of these $25 coolers can match the 27C we measured with the more expensive Tuniq Tower 120.

As the processor is pushed to its highest stable overclock using the retail HSF, the delta increases. At 3.73GHz the retail HSF is running at 56C, compared to 48C with the Thermalright and 45C with the Katana. The Katana and Thermalright perform similarly, which should not be too surprising considering both use a 92mm fan and both use a similar heatpipe/fin assembly - even though they really do look very different. The difference in performance between the Katana and MST-9775 is most likely due to the auto speed reduction of the MST-9775 as a result of the 4-pin fan connector. We performed several measurements of the two coolers at similar fan speeds and found results were very close, with a slight edge to the Scythe Katana.

The Scythe Katana reaches a slightly higher overclock of 3.81GHz compared to the highest 3.78GHz with the MST-9775. At the highest overclock each cooler reached the Katana was about 3C cooler at idle.

It is easy to measure the effectiveness of a cooling solution at idle - when the computer is doing nothing except running the temperature measurement program. It is more difficult, however, to effectively simulate a computer being stressed by all of the conditions it might be exposed to in different operating environments. For most home users CPU power is most taxed with contemporary gaming. Therefore our stress test simulates running a demanding contemporary game.

The Far Cry River demo is looped for 30 minutes and the CPU temperature is captured at 4 second intervals with the NVIDIA monitor "logging" option. The highest temperature during the stress test is then reported. We did try other variations in "stressing" the CPU, but multitasking variations did not produce higher temperatures than looping the Far Cry River demo. For that reason, we settled on the simple stress test of looping a demanding Far Cry demo for 30 minutes.

Cooling efficiency of the MST-9775 and Katana were compared to the retail HSF and the Tuniq Tower 120 measured under these stress conditions. It is very interesting that under stress conditions the performance curves of the MST-9775 and Katana get closer as speed increases. This confirms our suspicion that the biggest performance differences between these two coolers are likely the results of the Thermalright's variable fan speed. 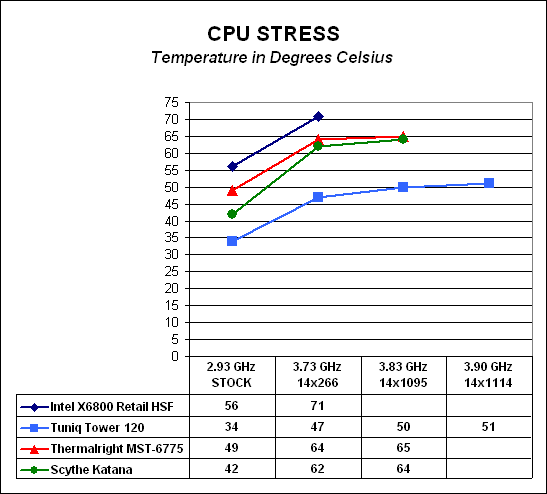 Both the MST-9775 and the Katana perform solidly between the retail Intel cooler and the Tuniq Tower when stressed and temperatures are measured at increasing overclocks. This is another way of saying the Thermalright MST-9775 and Scythe Katana both outperform the stock Intel HSF, but they are not the equal of the more expensive Tuniq. You can see that as processor speed increases the delta between these coolers and the Intel gets smaller - indicating they are not nearly as robust a cooling solution as the Tuniq. This should not be a surprise to anyone, since the Tuniq Tower 120 costs twice as much as the MST-9775 or Katana.

The performance of both of these under $30 coolers is very good. Either outperforms the Intel retail cooler, and both provide good value. They do not match the best cooling performance we have tested, but they do well considering what they cost.

As for the overclocking abilities of the CPU, they will vary at the top. This particular CPU does higher FSB speeds than any X6800 we have tested, but the 3.9GHz top speed with the Tuniq is pretty average among the X6800 processors we have tested. A few of the other processors tested with the best air coolers reach just over 4 GHz, but the range has been 3.8 to 4.0GHz. Stock cooling generally tops out 200 to 400Mhz lower, depending on the CPU, on the processors tested in our lab.