Battlefield 2 is a game that needs no introduction, still being one of the most popular first-person shooters out right now. This game is so popular among FPS fans, it has more often than not been the reason for a graphics card upgrade. Not since Halo have game developers managed to integrate flying and driving vehicles into an already decent shooter so well, and we look forward to seeing how much farther this is taken in Battlefield 2142, the next installment in the series. (Ed: Actually, some of us are rather disappointed with the changes brought on by the "2142 mod pack", but that's a story for another day....)

Our benchmark for this game consists of a third-person view of various players in the game on foot and in different vehicles, including a jet. The demo contains a lot of action (i.e. smoke, explosions, etc.) so it makes for a good test of the GPU. Since this is a fairly fast-paced first-person shooter, the average frame rate you want to look for is around 35 FPS and up to get the most out of this game. This particular benchmark uses the Daqing Oilfield map, however, which is not the most taxing BF2 map, so overall look for 45+ FPS as an indication that BF2 will run well on any map. Performance across other maps is similar, so a card that is twice as fast on one map will usually still be twice as fast on other maps.

Our settings for this benchmark are with the highest quality settings available, with view distance set to "max" and all the shadows lighting and other effects enabled. This is so that we can get the best idea of how well each of these cards runs this game. 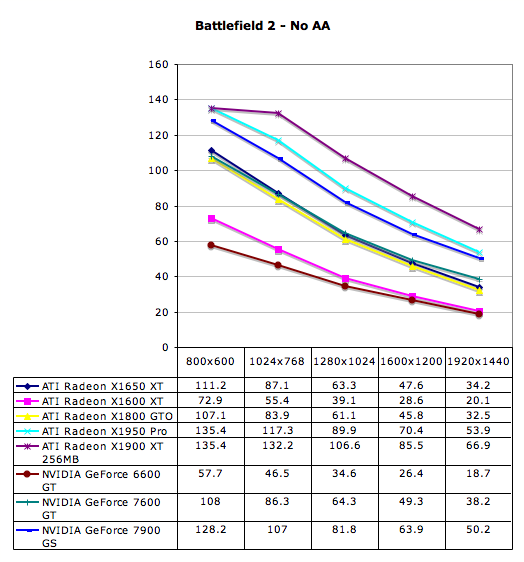